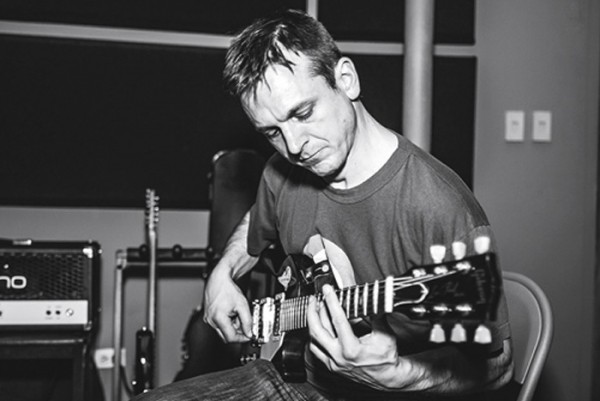 Dan Vapid has been in all of your favorite pop-punk bands. He helped pioneer the snotty-but-sweet sound that made Screeching Weasels legendary, then helped reinvent that sound all over again with the Riverdales. The rest of his resume reads like your record collection - Sludgeworth, The Methadones, The Mopes, Noise By Numbers and his latest project, Dan Vapid and the Cheats. What started as a means for Vapid to play all the songs he'd written over the years quickly turned into a full-time band in its own right, spawning an album that brought together elements of all his previous bands while still sounding decidedly different. With a second record on the way this summer, staff interviewer Adam Eisenberg called Vapid up to talk about the new album, get the details on the upcoming Mopes reunion at Insubordination Fest and learn why sometimes, you've just got to start another band.

You just finished recording a new album. Can you share the details?
Itâs a follow-up record on our own label called Torture Chamber Records, so we put out our own stuff now. The record will be called Two, and it will have 14 songs on it. Some of them are reminiscent of the first album and some of them arenât, theyâre kind of their own thing. Itâs kind of a mix of bands that I have been in in the past, but thereâs also some other elements as well. The release date will be July 30, and you should be able to find it on Interpunk and weâll have a Bandcamp site. It will be available digitally and all that.

The Cheatsâ live set has always been a mix of new stuff and songs from your other bands. Now that you have a second record under your belt, do you see the live set changing?
I still see it as a variety. I think some of the older songs that I had written wonât be played as much, but if we get called back for an encore or something, it will probably will come back. Theyâre always going to be there. People want to hear them and Iâm more than happy to play them. But from here on out there will be more Cheats songs in the set now that we have a second record. The first record, we had maybe seven songs in the set, but in actual length of time, that was probably somewhere between 15 and 20 minutes, where the set was usually about 45 minutes to an hour, so you had more songs from the past. Now with the second album weâre going to be adding more, so it will still be a mix, but weâll have more of our songs in there.

You also recently did a wedding-themed split with Masked Intruder. How did that come about?
It was Randy from Solidarity Records. He asked me if I would want to do a wedding song for a split 7-inch for his wedding. And I said yeah, I was open to the idea, and he said he had Masked Intruder, and when he said that he had Masked Intruder I said yes and when they found out that I was on it they said yes, so we were both excited to play on it. I had met the guys in Masked Intruder at Fest this past year and we were talking and they said "what are you going to write about?" I said I had a song called "Randyâs Getting Married" and I have about half of it written and they said "Ok, I think ours is going to be called âValerieâs Getting Marriedâ then." So it just kind of came about that way. I had finished my song, they had finished their song, we recorded it at Atlas and that was that. I guess it sold out pretty quick.

Youâre playing at Insubordination Fest in a few weeks with The Mopes. Itâs been a long time since that band has done anything. How did this reunion come together?
I was on Facebook and there was a little thread about how many times youâd been to Insubordination Fest and I said Iâd been to all of them. I believe it was the same thread – it turned into would the Mopes ever consider playing Insubordination Fest again? I said Iâd be down if those guys were. I recently was in contact with John Jughead and B-Face just within the last six months. Chris from Insubordination Fest sent me a message asking if I thought this was doable. I said yeah, I think this is doable as long as we could make all the logistics work, I donât see why not. So I reached out to those guys and they were really into it. That was that. It was pretty straightforward. Itâs me, John and B-Face and not the drummer Dan Lumley; he kind of wants to just play metal now, so I got the drummer in my band, Mike Soucy, to play drums. Weâre excited to be doing that, itâs going to be a good time.

Is there talk of any other Mopes stuff beyond this show, or is this just a one-off?
Itâs going to have to be a one-off. Between having a band already and having a kid I just wouldnât have the time to do it. B-Face lives in Boston so the logistics of it wouldnât work to do anything more than that.

What else do you have planned this year?
In August weâre going to have our record release show, August 3rd. And then at the end of August weâre going out west for a couple of dates. In October thereâs a chance we may go over to Italy and Spain, but thatâs still getting worked out.

You seem to be at The Fest in Gainesville just about every year. Will you be back this year?
I would love to, but the problem is weâve been working on this European tour for a while and itâs at the same time. Initially when they asked, we thought about Fest but we had just played Fest and we really wanted to come back to Fest, but the opportunity was when it was so we just kind of went with it. If it were to fall through or anything Iâd hope maybe they could book us still, but the plan so far is to just go back to Europe in October.

The Fest isnât exactly loaded with classic pop-punk bands, so how is it that you keep ending up there?
I totally agree with that statement. They like us. They donât totally embrace the style of music that I do but they like me enough to keep asking me back, and I like it enough to go back. I think at the end of the day, sometimes there are little, minor differences in the way I might approach a song versus the way Off With Their Heads approaches a song, but at the end of the day I think we all like the same stuff and weâre all coming from the same place. I think thatâs understood by a lot of people, at least I think it is. We all grew up coming out of the same scene, and even if thereâs a different take on it thereâs certain things that do bring us together, and I think thatâs what it is.

Thereâs a thread of consistency that runs through all of your bands, and yet they each have their own unique sound. Is that a conscious decision or just a function of playing with different people?
Yes to both. Iâm looking for ways to kind of mix it up a little bit, but at the same time thereâs that reality that who youâre playing with is kind of going to dictate your sound a little bit. I also think thatâs why Iâve been in so many bands as well. You play with someone for a while and after some time certain creative things just kind of stop, and sometimes you just want to do something different for a while and it doesnât sound like the band youâre in, so you start another one. At least thatâs my take on it. I think everybody has their own little sound. If I listen to Bob Mould for example, I think Husker Du sounds different from Sugar sounds different from his solo stuff. But it always sounds like Bob Mould to me because itâs coming from him. Heâs just one example, but he always has some kind of thread thatâs through it. I think thatâs just from being who you are. I think everybody has their own little sound and little thing that they do, for better or worse. Hopefully if you have that itâs going to be a sound that people like. I think thatâs the reason thereâs always that similarity between each band.