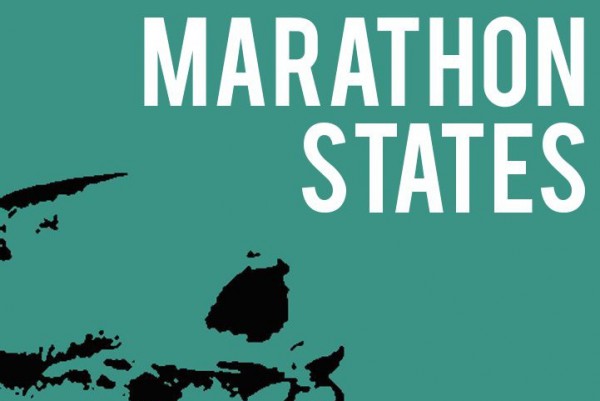 Contributed by punknewscommenter, Posted by John Gentile 8 years ago

Marathon States, the new band featuring Jason Thinh of Short Round and the Chinkees and Morgan Herrell and Max Feshbach of Hard Girls and Classics of Love, have released two new tracks. The songs "Deaf Comedy Jam" and "All these Landmines" are available here. The songs were recorded by Bob Vielma (Shinobu, Gnarboots, Boboso) and Joel Hatstat (Pegasus XL , Cinemechanica).

Currently, Morgan Herrell and Max Feshbach are in Marathon States despite the fact that they are both in two other active bands, Classics of Love and Hard Girls. Herrell and Feshbach were also in Pteradon and November Trials together. Herrell and Feshbach are in Classics of Love with Mike Huguenor, who is also in Shinobu. Bob Vielma, who recorded the new songs, is also in Shinobu. Herrell, Feshbach, and Huguenor also backed Mike Park for his Smile album and on live dates.

Mike Park was in the Chinkees with Jason Thinh, who is now in Marathon States. Jesse Michaels is also in Classics of Love with Herrell and Feshbach. Michaels famously recorded the track "I'm the best" on the Boboso album Life's A Gas [mix tape] with Bob Vielma, who recorded the Marathon States songs.

We hope you found this summary to be helpful.