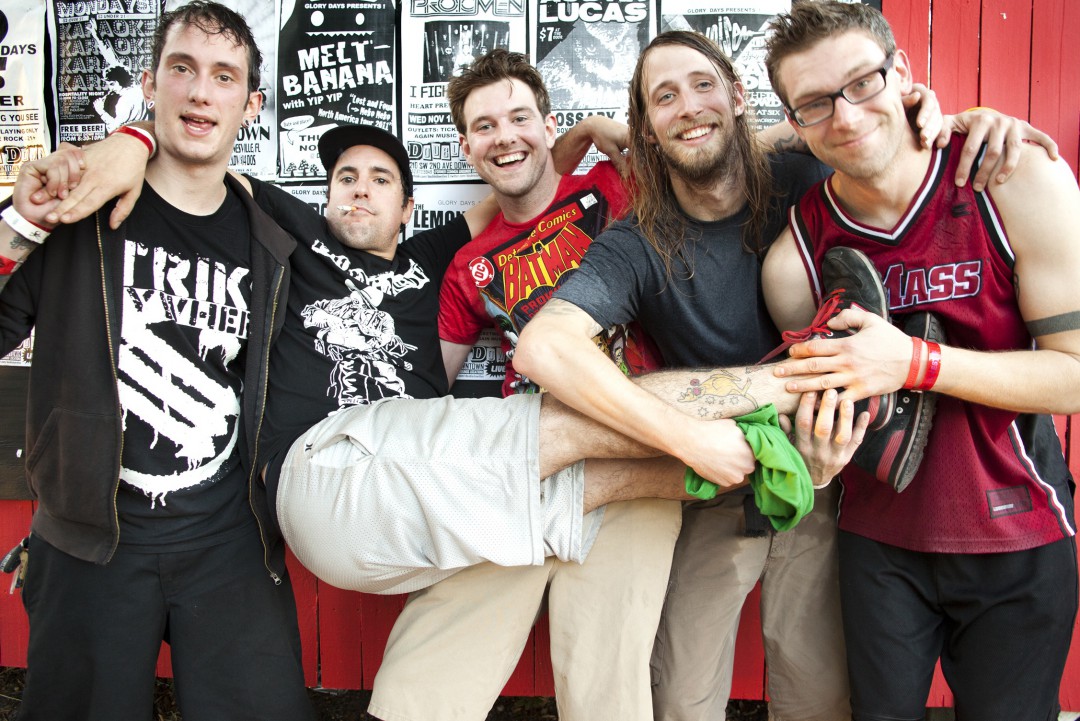 Contributed by sammiesiam, Posted by Kira Wisniewski No Idea Interviews 9 years ago

It's been a busy seven years for A Wilhelm Scream, having played festivals around the world to self-producing and engineered their latest record. Their new album Partycrasher came out on No Idea Records this month. Interviewer Samantha Barrett sat with Nuno Pereira to talk about the new album and their beloved hometown of New Bedford, Massachusetts.

Itâs been seven years since your last full-length record release, What took you guys so long in putting out Partycrasher?

Cool. You guys just released your fifth full-length via No Idea Records. What was your vision for Partycrasher?

I didnât have a solid vision. I think I did at first but as the years wore on I kind of forgot. I am pretty stoked on that, it gave me a chance to listen to it with fresh ears. I wasnât sure I'd even liked the record anymore, even as recently six months ago. I was worried if it was going to be well received or not. I usually have never been worried about that, mostly because I donât care about that kind of stuff but this time I think I had a lot of time to dwell on it. I just let things happen as they will and I am very happy about the outcome. As for the vision overall, I was blind as a bat. To tell the truth I had no idea what was happening half the time.

How was the process in engineering this record?

Trevor and Mike were really starting to hone in their skills as engineers. They really just shut themselves in the room and like perfecting each piece of equipment they buy, tinkering with everything and working out the bugs. This kind of added to the delay, because they always thought to themselves "We can do this better. We are going to do this ourselves and I think we can do this better as producers" I personally think we should put out the best possible product especially when this is the first time, well really not the first time with this kind of setup and studio. I guess Trevor and Mike were holding the reins a lot of the time, but it was kind of an engineering aspect than a creative aspect.

This is the first full-length with Mike Supina. How was the process creating an album with Mike rather than Chris Levesque?

A lot of it was very familiar. They're both kind of similar guys besides Chris being really, really angry and Mike being really, really happy. Theyâre both amazing musicians obviously, and having Mike around made studio stuff a little easier. It took a load off Trevor. I think it really helped him blossom into becoming a really experienced and well versed engineer and producer. Mikeâs songwriting is "how fast" and thatâs really fun to watch. That can be really hard to write to sometimes, especially when itâs melodic. As soon as I get an idea of what youâre going for, you switch tracks and go off on another direction. It's fun and exciting, and it helps me and Trevor out quite a bit. Having a third party involved to try to get us away from ourselves and Chris is really good at that as well. Chris never really got a chance to write lyrics, but he will be the first to tell you that he doesnât ever want to write lyrics. Mike brought some stuff to the table that was really honest. He was really embarrassed about it at first, but when he showed us what he had, we were floored. We had some fun and said "this fucking rips and youâre really good at this, I wished you said something earlier!" So that part was fun. Thatâs also how they are different. The way they were the same they both shred and they both make it feel like these song was their own.

Lyrically what are the difference between Partycrasher and your other LPs?

I donât know, I think when anyone is writing lyrics for a song, poetry, a blog or whatever these kids are using now, or even a tweet, you're kind of in that moment. When we wrote some of those earlier albums things were a lot different. I didnât have a kid, and none of us had what we have today. We have different problems and different responsibilities. You tend to write about whatâs irking you or whatâs stoking you out so when I look at those albums, I just look at what was going on in my life. At that time lyrically it was very time specific and then there were things that were very broad, so I kind of leave things up for interpretation even if there is a direct meaning to the lyric. I guess some were darker because we were more pissed off and sometimes we were more jovial because were pretty fucking stoked about what weâre doing, so itâs hard to say. Itâs hard to be objective, I can't really look at it objectively, I kind of see it as one big timeline.

What made you decide to work with No Idea Records on this LP?

We have been talking to them for the few years we have been going to The Fest down in Gainesville. Tony was great in getting us talking and through the door. No Idea is a great record label. My all-time favorite bands are on No idea, Samiam, Hot Water Music, thatâs their home base. It felt safe, it felt like they understood what we were trying to do, and even if they didnât, itâs one of those record labels that okay with taking chances.

We just want to put out a great record, we wanna have fun doing it. It was great that they let us get our friends involved in the artwork, and they let us be very hands on in general with what we were trying to put out. As a musician you cannot ask for more than that. They just kind of give you the freedom to do what you want and they have the muscle to press the record and put it out there. Their great people with great vibes. It was kind of a no brainer.

Speaking of hands on, who did the artwork for Partycrasher?

A young man by the name of Dave Kloc. He is an amazing man, an incredible artist, and an amazing hockey player. He has also done work for Heartsounds and The Swellers. Every week or every other week he creates a brand new poster for the Comedy Meltdown, it takes place out in LA where he lives now. We have always tried to keep it in house when it comes to stuff like that. Itâs fun to show off your friends, like "My buddy is really good at this and I want everyone to know about this." He has a lot of vision, he is someone who has that kind of drive and that kind of vision.

Is there a story behind the cover art?

New Bedford, Massachusetts is where we are from. New Bedford was one point the whaling capital of the world, one of the richest cities of the world. We were touching up on things to bring hometown flair to it. Dave just went with it, he gave it his own flair and we just put words on it. It's fun to see what someoneâs idea of being on a boat, trying to hunt these monsters and being killed by them back when this was the only means of life. New Bedfordâs motto is Lucem Diffundo, it is Latin for diffusing the light. All the lamps were oil until other fossil fuels were discovered, it was the only source. It was literally everywhere. There is a little bit of history and hometown pride in that although itâs obviously barbaric and we donât do this anymore. It was a pretty grisly thing, it kept our city and our area afloat for 100-200 years. We were paying homage to that, and other brutal grim realities.

Tell me about the song "Born a Wise Man"?

It reads like a story. The Acushnet River is the river that runs through New Bedford. Trevor used to get high and watch the fireworks on Fourth of July all the time and tell stories about it. My favorite part of the story is how I came to join the band. He talks about his bandâs first gig at this place called The Exit Club, kind of a rat hole, kind of an awesome dive in New Bedford. His band had their first show there and the singer was like "Why isnât anyone moshing?" It was their first show, the crowd didnât know any of their songs. He basically said "You guys suck," and that next Monday he quit the band. I moved back to New Bedford, a few months after that I met the guys and thatâs how I ended up singing for them. That kid quit because no one ended up moshing for their songs. Thereâs much more but I think some of those questions are better off left for Trevor. Also everyone practices in their momâs basement for as long as they can. We did it for YEARS. The Reilly's should be sainted or whatever the equivalent to that. They were definitely the martyrs for our cause. Every Monday night their house would be shaking, rattling, and very loud. Thanks Mr. and Mrs. Reilly.

How was Fest 12 this year? Any highs and lows?

Dillinger Four slayed. I did four stage dives during D4's set, more than I have the last eight years combined. I would like to issue an apology to the security that was running the stage that night. Seeing them and seeing The Lawrence Arms was the highlights of Fest for me. The low lights were seeing my friends get into fights, me having to break up the fights, the diarrhea and hangovers.

Hopefully we can tour as much as possible in short controlled bursts. Iâve got a family now and itâs real tough to be away for 24 hours, let alone these marathon tours we have been known to do. So something like a month, two month, or three month tours are kind of out of the picture. None of us feel like that we have to do that anymore. We just go and play the shows we know were gonna have our friends there. Obviously with a new record out we know we have to do some touring, so we'll just space it out. Weâll try to be reasonable about it, but also try not to kill ourselves. I have to try not to get my fiancÃ©e, the mother of my child any more pissed off than she already is at me. Itâs a fine line and weâre all ready to walk it.

Music: The Hell: "Stay Another Day"