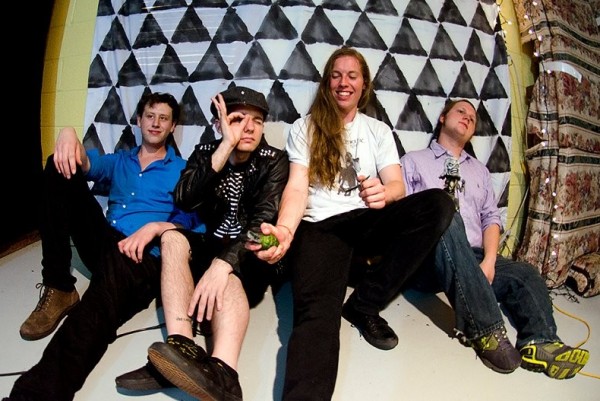 Crazy and the Brains are a wild-as-hell, totally-kickin', mad-energetic bunch of weirdos that happen to be in a band with a xylophone. They cut two and a half minute stompers that rock like Jerry Lee Lewis and roll like Little Richard. Also, they might be insane. They released Let Me Go in 2013 and it was one of the best records of the year.

In order to get a taste of this crew first hand, features editor John Gentile met up with them at a secret show following their tour where they talked about the latest album, macking on Lindsay Lohan, and The Jersey Shore.

This first time I met Crazy and the Brains, bassist Brett Miller was beating a man over the head with a folding chair. You see, CatB had just finished a successful, mostly jammed packed, coast-to-coast tour, promoting their cracking album Let Me Go. On a whim, they decided to extend the tour one final day and play a dive bar in Philadelphia on their way back to New Jersey. They didnât really promote the show (because it was scheduled like four hours before their set time) and were thrown on an eclectic bill with an instrumental, drone/noise band and another band that was basically G.G. Allin minus the subtlety.

So, CatB played their set, a kick ass, raw, loose set of banging rock and roll tunes backed by a xylophone to about seven people, including myself. Their songs were based in the classic 50âs rock structure, but were wackier and wilder. There were songs about loving Lindsay Lohan. Another about showing up naked on Saturday Night Live. There was also a song about being so addicted to dirty magazines that one joins the Chruch. They rocked out.

Then, before I could interview the band, the GG Allin influenced group set up their stage to a grand audience of six. CatB, myself, and one fan/ the lead singer of that band put a metal chair in the middle of the room and suplexed himself onto it. After groaning and grabbing at his own ribs, he got up and demanded that people punch him in the face.

Like myself, CatBâs were a little skeeved out by the prospect, so we each just gave him a few love-taps. Disappointed, the lead singer then put a trash can on his head and demanded that Brett Miller hit him on the head with the chair. Weirded out, Brett just gave him the tiniest of flicks with the chair to appease. The singer then yelled at Brett, "What are you? A pussy! Hit me, you bastard! HIT ME!"

So, Brett paused, wound up his swing, and then slammed the chair right on top of the trash-can helmet. The sound reverberated through the club and the singer dropped to the ground as if his muscles had lost all function, leaving a weak moan in his descent. I knew then that CatB and I would be the best of friends.

What was it like hitting that guy with a chair? Brett Miller (bass): I didnât want to hit him too hard. But, I put the football helmet on that he gave to me and hit him.

Christopher Urban (Vocals/Guitar): Yo! That guy is a sadomasochist. He wants it!

Do you know those guys? Brett: No, no, no! I saw the drummer outside and he had nothing but compliments, so I said we would stick around for their set.

What does your music say about the human condition? Brett: The last show we played, the stage just got rushed. That has not happened before. We love crazy shit like that. We want people throwing people themselves around. Thatâs how we know people are having a good time. We want psychotic fans. But mostly, we just want people to show up and listen. On top of that, we want to throw each other around.

Christopher: When you come to our show, we want people to forget their problems and have a great ass time- Just having fun. If you go see us, itâs like seeing a movie. You want a break from your normal life. You want to have a good time. If you come to our show, we've got guitar, our amps are up- we rockâ¦we live for the 30 minutes on stage. Thatâs our entire lives compressed into 30 minutes.

You have a song called "Lindsay Lohan." Do you really like her or is that an ironic tribute? Chris: She gets a lot of flack and I think people need to lay off her. Sheâs a good looking girl. Mean Girls is a good fucking movie. Give it another watch. -

But Mean Girls was a while ago. Do you still like her? Chris: Oh, all the way. Sheâs definitely a love. She was also in The Parent Trap. I cried when I watched that. People need to lay off her. Leave Lindsay Lohan alone-han!

Do you have any plans to make the moves on her? Chris: The thing is, I really think that me and her have a lot in common and that we would have a lot of fun.

Drugs? Christopher: No, no no. Iâm not condoning drug use. We both know the sweet aches of the soul. Sheâs got a nice face. I think sheâs smarter than people think.

Lawrence Miller (Drums): You could talk about your shared European heritage. You both have all your teeth. I like her freckles. Does she wear corrective lenses?

Christopher: If she does, thatâs fine with me.

You also have a song called Saturday Night Live. Do you actually want to get on that show? [Editor's Note: CatB actually WERE on The Chris Gethard show following the interview] Christopher: Absolutely.

Lawrence: We all love the show. We watch it all the time.

Christopher: On the real though, the first thing I ever wanted to do with my life was be on that show as a comedian. We really do want to be on that show.

Does punk rock take itself too self seriously? Christopher: I donât take it serious. Itâs just for fun. We take ourselves seriously as musicians. We take the business seriously. The problem begins when you start taking the music seriously. It is punk rock after all. A lot of people constantly ask us if we are a joke band. I guess thatâs because the songs are all energetic and up beat and we like to have fun and fuck around on stage. We like to have fun but we take the music very seriously. The songs and lyrics are never jokes!

Brett: Itâs not hardcore fusion. Itâs not jazz. If you get too serious about it, you turn people off.

But, you do have serious undertones? Christopher: Yeah man, with our lyrics, with the exception of "Lindsay Lohan," the songs are about real things.

What is "Let Me Go" about? Brett: I think itâs based on an amalgam of all of our former girlfriends that we are still bitter about. Even if were not personally bitter, we want people to have a cathartic experience.

Chris: Itâs a breakup song, but itâs a happy break up song. Its main statement is, "if you lose me, you miss out on a great thing." Itâs a positive break up song.

Do you guys have a lot of girls chasing after you? Brett: Well, Iâve got a girlfriend at home, but these guys can do whatever they want.

Christopher: Nah man, weâre not about that. We donât play music for that. We just want people to have a good time.

You also have a xylophone player in your band, Jeff Rubin. How did you all meet up? Brett: Jeff met me outside of William Patterson and it was love at first sight. Itâs where we studied together. Me and Jeff studied classical music. I was outside there at like four in the morning and he was cursing about some shit, and we bumped into one another and thatâs how we got started. Punk rock and stuff like that.

Iâm really amazed by how a lot of your songs are rock n roll bangers, but they donât get boring or repetitive. Lawrence: Part of that comes from me and Brett playing in cover bands for a really long time and having to keep the songs interesting. Through a variety of styles as far as the drums go, I try to do something intentionally different with each song.

What is something insane that happened on tour? Brett: We had a bus last year. There was constant driving. If you werenât driving, then you were drinking. But we were driving down the highway, and all of a sudden, the bus started to lurch back and forth. Like it was rocking really bad. So, we stopped and pulled over. I was walking around the bus and I looked at the back wheel and the lug nuts had gotten loose. One wheel had one lug nut left! That would have been the end of Crazy and the Brains. If we busted out at 80 miles an hour, I donât know what would have happened.

Lawrence: When we on tour with our friends, one of our friends got kidnapped in his own car. He fell asleep in his car and this guy jumped in and said he would kill him and made him drive around. Eventually, he jumped out ran up to the police. The police wouldnât hear it and let the guy drive away. Eventually, the car wound up in Compton.

Christopher: The Lynwood sheriffs department are a bunch of fucking jerkoffs. They donât give a shit about anyone. Fuck the Lynwood police department

Brett: But, the Long Beach police department is professional. We have love for them.

Christopher: Shout out to Long Beach!

So, you are both anti-cop and pro-cop? Brett: I love the cops, but my mom works with the police, so I have to love the cops. Sheâs a secretary

Are you worried about calling out the cops?

Music: Eldora: 'The Hopeless, The Submissive'