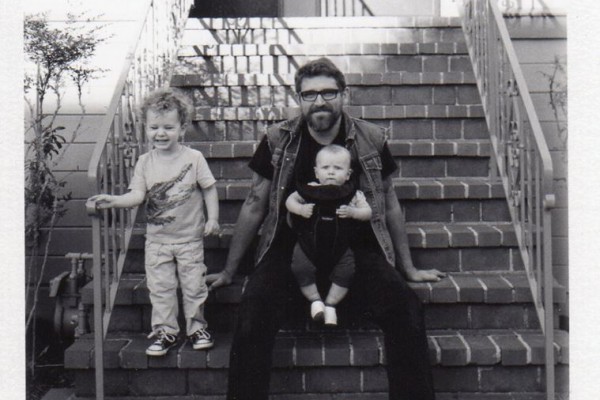 Adam Davis is a maniac. Like, this one time, he drew 100 robots. Some were happy. Some were sad. Some were murderous. Some were just robots. That's (an insane) dedication of Nick Blinko proportions. THEN, after that, he drew 100 dinosaurs! But, not only did he draw 100 of them, he hid them in random spots around the Bay Area, spread clues as to where they were hidden, and then kept track of them as people found them.

On top of that, he's done art for Mike Park's Childrens records, about a million punk rock flyers, and probably did a logo for your friend's band. But! On top of THAT, he was in Link 80 and Desa, formed the the crust/death metal band Primary (which did anarcho-metal versions of Mormon schoolchildren songs), and is one of the masterminds behind the wonderfully chaotic and bizarre Gnarboots.

Because Davis likes hiding things in bushes around the bay area, and because he's in a few of the wildest, most creative punk bands ever, features editor John Gentile spoke to him about art, robots and why Mike Park doesn't like to look at paintings of wieners.

You can click read more to learn all about Mr. Roboto.

What got you interested in the visual arts?
I've drawn since I was very little. I've always been really into comic books -- the first word I spelled on my own is "Batman." My earliest memory of drawing is watching my brother try to draw Superman, but leaving out the head, or the cape, or his feet. I went back and drew all of the pieces that my brother had left out. I remember feeling very excited that I could create something I was seeing inside of my head on paper.

That rush is something I still experience and seek out to this day. In school I was constantly doodling in the margins of pages when I should have been taking notes. On tour I would create small sharpie murals next to the dicks drawn on backstage walls.

You were raised Mormon, but now, I believe, aren't strict in belief. Do you think this has affected your visual art?
I used to draw really dark, weird stuff as a teenager -- mutilated demon heads hanging from meat hooks, that sort of thing. I'm not really interested in drawing things like that anymore. It could be a result of not having anything to rebel against, or just growing up. While I'm no longer a practicing Mormon, my morality and belief system doesn't fall that far from what I was raised with.

Also, anyone who is still a member of the LDS church, if they have a halfway decent sense of humor, should check out "The Book of Mormon" musical, or the Primary 7-inch I put out on Asian Man Records.

If you ask me, your work often has a sort of cartoonish feel to it. What do you see as your biggest influences?
Bill Watterson of "Calvin and Hobbes," Berkeley Breathed of "Bloom County" and "Outlands," Jake Parker of Agent44.com, Eric Powell of "The Goon," Josh Ellingson. I'm lucky enough to call Josh a friend. He's SO GOOD. Also, Gilbert Armendariz, who does a lot of Kepi and Dan Potthast's art. We both grew up in Gilroy and he is awesome.

What is up with all the robots?
Robots are fun to draw. That's really all there is to it. They are my default. Don't give me any input, I will probably draw a robot. There was a period of time I was drawing a lot less, mainly because I was focusing on playing music, and with an artist like Aaron Nagel in my band, I felt too intimidated to draw. I joked that I would only draw four things at that time: robots, dinosaurs, zombies or skulls.

To try to break out of that cycle, I completed a project where I painted one hundred robots. I felt like this just compounded the problem though because I felt I had gotten a lot better at drawing robots. Next, I painted one hundred dinosaurs. I still think about painting one hundred zombies or skulls too, but I'm currently too busy drawing other stuff. Looks like I broke the cycle!

Tell us about the famous dino-hunt that you did. Why did you choose to do it?
I knew I wanted to paint a hundred dinosaurs, but I didn't want to do the same thing that I had done with the robots. I didn't want to paint them all on the same size canvasses, and I didn't want to sell them again. At the time I was very involved with the Games of Nonchalance, a narrative scavenger hunt that led participants all over San Francisco. I thought it would be cool to create something that would combine art and adventure. I heard about the Awesome Foundation giving micro grants for people wanting to execute weird, fun ideas. I filled out the application on the fly and wound up being chosen! It wound up taking me way longer than I expected to complete the project, mainly because I became a father in that time span, but I did finish it!

I'll be launching a new project in March, Secrets Everywhere which will be similar, but will also feature other artists, and will build on the lessons I learned doing the Dino-hunt project.

How do you see punk rock and the visual arts intersecting?
Man, I'm not sure anymore. I used to love seeing shirt designs by Pushead, or album covers by Coop, or concert posters by Derek Hess. Now I feel like every band I like steals an old photo or just scrawls some words, and that becomes their album cover or shirt design. I mean, I know there are exceptions. I really like the art that Jason Lubrano does for Iron Chic. I bought a Jonesin' 7-inch just for his art.

You have a theme running through your art where you put video game characters into classic punk photos. Can you talk about that?
This just snowballed from Gnarboots falling in with the chiptune/nerd-rock/video game scene. We became really good friends with the Minibosses, a band of totally amazing weirdos who shred Nintendo songs. They're all extremely talented musicians who have played in a ton of different bands, and they're all way more punk rock guys than you would expect. When I made a poster for our mini-tour, I thought it would be fun to put Mega Man in the place of Henry Rollins. That led to me replacing the members of the Ramones with Mario, Pikachu, Link and Mega Man for this year's Rockage poster.

You spent your formative years touring with Link 80 and Desa. Do you think all the traveling affected your take on visual art in any way?
In Link 80 we went to the HR Giger Museum in GruyÃ¨res, Switzerland twice. That's an opportunity I don't think I would have had otherwise. The second time we brought the Chinkees and MU330. I remember Mike Park walking around shaking his head, going, "oh, you like this art? That's cool… You're still a nice boy, Adam." Also, with touring I was able to go to a lot of places that I otherwise might have only seen in pictures, and I think it informed my perception of different locations and cultures. There's really no substitute for traveling.

Have you ever had to deal with unauthorized usage of your work? If so, what did you do?
My main problem is having a commission that I do for one project, say, a shirt or a sticker design, show up on a different piece of merchandise it wasn't intended for. The only reason it bothers me is because sometimes the art winds up laid-out poorly, and it doesn't look its best. I try not to make a big deal about it because I know bands are just trying to get as much mileage out of an image as possible, but it still is a little bit of a bummer to see your art not look its best.

This is a person on Florida right now on death row named Adam Davis. Does that keep you up at night?
Nah. I've never heard of this guy, who cares. Murder is boring, and getting caught is stupid.

This guy keeps me up at night, though.

What do you have in the works?
I just completed a piece for the Steve Caballero "Half-Cab: Birth of an Icon" show in San Jose. Going to his house to hand that off was a trip. I watched "The Search for Animal Chin" so many times as a kid. I'm really hoping Jim Phillips will be at the reception -- his son Jimbo is in the show. I'll also be showing some of my art at Rockage 3.0 the same weekend, in addition to playing with Gnarboots.

I'll be having a show to launch the Secrets Everywhere project in March at Julie's Tea and Coffee in Alameda. It's a really nice coffee shop around the corner from my house, I go there with my sons all the time. I saw Jesse Michaels in there the other day, he was talking to someone about his book. I think the Residents go there sometimes too, but since I don't actually know who they are I'm not sure. They do live in Alameda though. I really like Alameda, it's really weird. I'll have this site I'll be updating soon with all of the things I like about Alameda. I also have an art show that is on March 14.

Also, I really like to draw. I wish there were more hours in a day so I could draw more, and still find time to raise babies, read, eat, play video games, play music, ride my bike, go to concerts and play capture the flag. I mean, I do all of that stuff right now, but I'm always running out of time.