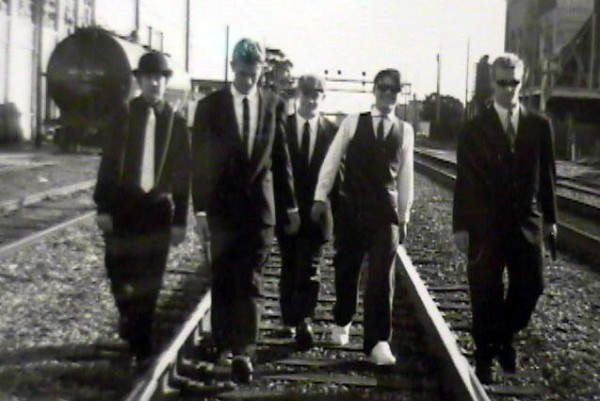 Link 80 started in early 1994 in the famous East Bay of California. In the beginning, original members (guitarist Matt Bettinelli–Olpin, drummer Joey Bustos, bassist Adam Pereria and singer Jeff Acree) played around town as Drano, The Rag–Tags, and Mr. Slave–Unit, before settling on Link 80.

The name came from the interstate highway which they used to get to the drummer's garage for band practice and connected the band members homes.

In July of 1995, Nick Traina joined the band after meeting Adam at a show in San Francisco's Mission District. Nick's passion and voice combined with the rest of the band to make them different from most ska bands and gave Link 80 the "against the rest" attitude they display throughout their lyrics. With an energy and a sense of immediacy lacking in pop–oriented ska bands, Link 80 was able to avoid the cliches of ska–punk characterized by their peers. As Asian Man Records describes them, they are an energetic blend of ska, punk rock, and hardcore.

By 1996 Link 80 had released their first full–length album titled 17 Reasons, which had 17 songs of fast and energetic punk rock and skacore (and one hidden track, a cover of "Who Killed Marilyn–" by the Misfits). In 1996, with all the members still in high school, the band left for their first U.S. tour.

On this tour, the band created their own "crew," known as ATRC, or Against the Rest Crew. The core line–up for these definitive years was Nick Traina (vocals), Joey Bustos (drums), Matt Bettinelli–Olpin (guitar, vocals), Adam Pereria (bass, vocals) and Aaron Nagel (trumpet). This line–up would release the first and second of their three albums.

The following year Link 80 was on to its second US tour. Beginning in Oregon on June 14th, the tour was cut short after a show at the Globe in Milwaukee, Wisconsin on August 1st. The following morning the band went their separate ways, with some members flying home, some driving, and some taking a train.

Link 80's last album with Nick and Matt, Killing Katie, was released August 26th, 1997, less than one month before Nick's death. The album contains 7 studio tracks and four live songs, including the long–time crowd pleaser "Blank Mind" (of which there is no studio version)and a cover of Buffalo Springfeild's "For What It's Worth."

With Nick gone, Link 80 needed someone to fill in on vocals. After numerous false starts, Ryan Noble was chosen to pick up where Nick had left off. Along with a new singer came a new sound and lyrics, while still maintaining the "against the rest" attitude. Link 80 began to lead more towards a hardcore/ska sound rather than a punk/ska sound. With Ryan, Link 80 recorded the album The Struggle Continues in 1999 and toured numerous times with such bands as Capdown and MU330.

The last track on The Struggle Continues, "Unbroken", was written by ex–guitarist Matt for Nick after his death. In 2002 the band consisting of Adam Davis, Aaron Nagel, Steve Borth, Joey Bustos, Barry Krippene, and singer Ryan Noble went on hiatus. Steve Borth would join the RX Bandits, and the remaining members would form DESA. They have since maintained that Link 80 would return, but for now they are focused on their respective projects.