Atom Willard (Against Me!) 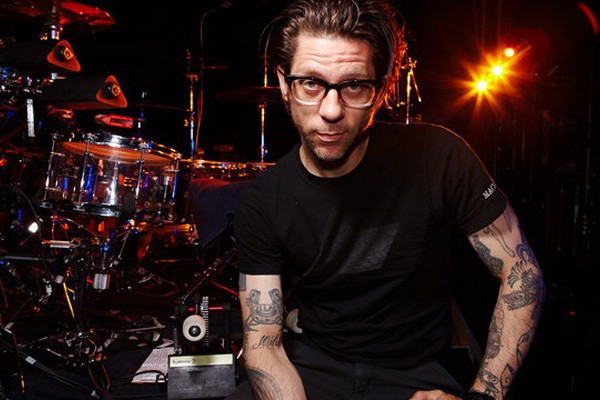 Contributed by shogun, Posted by Kira Wisniewski Interviews 7 years ago

For the close to 25 years Atom Willard has been drumming, heâs kept the beat for a number of impressive names in rock and roll, including Rocket From The Crypt, Social Distortion, The Offspring, Angels and Airwaves, theHELL, Danko Jones and now, Against Me!

During a break in touring for Transgender Dysphoria Blues, punk rockâs most cultured (or most promiscuous) drummer spoke to Punknews interviewer Gen Handley about who has inspired him over the years, why he has moved around a lot and how he finally found a home with Against Me!

Hey, howâs it going today?
Really good man. I donât know if you know this about me, but I love French bulldogs; my wife and I have a couple. One of them is super fucking picky and one of the foods we feed her has just been discontinued so I just rode my motorcycle all over L.A., buying up what I could of the remaining supply. [Laughs] Yeah itâs really rock and roll, but it is what it is and I love her. Sheâs 11 and thatâs a pretty good age for a French bulldogâ¦thatâs a pretty good age so we try to keep her happy.

[Laughs] Congrats on Transgender Dysphoria Blues. What was the experience like making the album?
Oh, thank you very much – Iâm pretty stoked on it. It was interestingâ¦I wouldnât just talk about the recording part as being the experience. Really, what happened was I got brought into the band when they kind of had a drummer emergency and they needed somebody to go with them to Australia. So in doing that I was kind of in a rush situation to learn a bunch of songs pretty fast. I pretty much knew everything from the back catalogue because I was a fan going into it, but I had to learn the newer songs in a hurry. So doing that and playing with them live in Australia, it all came together really well. And then Laura [Jane Grace, singer] said, "Hey, this is going great. Do you want to record a record?" I was like, "Absolutely." So in L.A., where I live, she and I did a couple of days of pre-production, some rehearsal and went through some different ideas I had for songs. After two days of that, we went into the studio and really went through the songs quickly – it was done in like two days for all the songs. Like, she had to go back and do all of vocals and stuff like that, but the drum parts went really quickly. So my experience was awesomeâ¦super short, super quick, but it was comfortable and easy. Ultimately, that was one of the biggest things that made me want to be part of the bandâ¦that experience I had with her and how easy it was on stage and in the studio.

What do you attribute that ease to?
Really, the only thing I can think of is that we were just very like-minded about all the important shit, like the aesthetics of the way I like to do fills and the way that I phrase my parts around what sheâs singing. I think it really resonated with Laura and she was happy to have it going in that direction. When she did have an issue, I wasnât like, "What the fuck? I wrote that!" Iâm not like that, Iâm not a combative drummer. I donât care where the best idea comes from, it just needs to be the best idea and there were a lot of good ideas.

The album is so good in so many ways – from pretty poignant lyrics to the raw-feeling production. What do you like most about it?
Yeah, for me itâs just the songs. I really love the songs and yeah, the fact that itâs such a raw record in so many ways. Not just the production of it, but the whole overall vibe of the record is just this raw experience. Thereâs no extra shit on there, thereâs no extra instruments or synthesizers or extra percussion – there isnât anything that isnât happening every night on stage. What you see is what you getâ¦itâs pretty cool.

You have a pretty distinct, super hard-hitting drumming style. What were the biggest influences of that?
Iâve been playing the drums since I was four years old so every drummer Iâve seen live has had some kind of influence on me. Even if Iâm like, "Why would I want to do that?" or "I sure donât want to sound like that." [Laughs] But more so in the positive way. There were earlier things that made a bigger impact on me. I was and am a huge fan of Fugazi and the way Brendan Canty wrote his parts and other different drummers who approach the drums as more of a musical thing, working with a song as opposed to "Whatâs the raddest, craziest roll I can do and how often can I do it?" So it was Fugazi and The Melvins and also playing with my band at the time when I was young where I had to play louder, louder and louder just to be able to hear myself. I think that really dictated how I ended up playing for the rest of my life.

Youâre talking about Rocket From the Crypt, correct?
Yeahâ¦yeah, that was loud. [Laughs] Weâd always practise in these tiny places and as we progressed, everyone got bigger and bigger amps. All of sudden, Iâm in a room with all of these huge amplifiers and I just had to play louder because I couldnât just go buy more volume, you know?

You mentioned how you started playing when you were four. What got you to pick up drum sticks at such a young age?
Iâm not sureâ¦canât really remember. My parents did say that I was always banging on pots and pans and so they got me a drum set. When I was little, we lived in Colorado and we had a basement, which was easier for them to get their heads around because they were like, "Yeah, heâs in the basement and it wonât matter because we wonât hear it." But then flash forward a year and we moved to San Diego and it was upstairs in a house. [Laughs]

Whatâs going on with Rocket From The Crypt? Are you writing new music?
Iâm not sure if they are going to do a new record or not – they havenât asked me to be involved with anything and I havenât played all of the reunion shows theyâve done. Theyâve been using Mario [Rubalcaba] who came in after I left – I left in 2000. I only played a few shows with them because I had time, but in the grand scheme of things, thatâs not my band anymore.

Youâve played in a ton of different bands over the years. Why is that? Do you get bored easily? Is it restlessness?
Iâve been asked that a few times and what it really comes down to is that Iâve never been willing to settle. And by settle, I mean that Iâve always wanted the perfect situation where Iâm creatively fulfilled and can do things I like to do and can speak my mind and be part of decision-making process for everything – t-shirt designs or songwriting or whatever. So I want that and I want to be in a good environment with people. I want to be around people who I get along with and I enjoy and Iâm like-minded with. And after all that, I need to make a living. You can have the greatest time in the world with your friends, but if you canât pay rent, you canât go on tour. So itâs really been a quest to find all of that. There have been a couple times when I thought, "This is it!" Like with Angels and Airwaves, I thought it was the best thing. We had the greatest time and all got along, but circumstances changed when Tom [Delonge] started back up with Blink [182] again and the whole thing took a different turn. So itâs all of those things that have motivated me to move on. Iâm just an idealist, I guess. [Laughs] I know itâs out there – I can find it. [Laughs]

Iâm so lucky and so fortunate to have been given all of these different opportunities, but life happens and things change and you just have to change with them.

Whatâs your favourite type of music to play? Straight-up punk? Rockabilly?
Wellâ¦just rock and roll, I guess. Thereâs such a stigma with labeling anything as punk rock these days. As long as itâs something that I can play as loud as I want and thereâs a hook and chorus that moves me and makes me feel like Iâm really doing something, Iâm happy. So it has to be a good time, it has to be loud as shit and it has to be high-energy – as long as those things come together, Iâm in.

Of all of the different bands youâve played in, what makes playing in Against Me! unique?
Itâs the first band in a really long time that Iâve felt the freedom of aâ¦fuck, how do you say itâ¦a freedom within the actual shows. Where something can happen that was not scheduled, that was not planned, but shit is constantly happening thatâs unpredictable and exciting. You just never know. And in the way that Laura and I interact – and James [Bowman, guitarist] and Inge [Johansson, bassist] as well – we play off each other really well and thereâs a spontaneity during the shows that I havenât had for a long time. Playing along with tracks or computers or whatever it is, youâre locked into a certain thing. But with this thereâs that possibility of sudden change, which keeps it really exciting and fun.

So whatâs in the future for the band right now?
Weâll be home for another week and then itâs some touring in the US and then in Europe and then more US and then who knows. In the meantime, we have been kicking around some new ideas for songs and starting to get going on that. Who knows, the next record may come sooner than anyone thinks. It should be exciting.