Audrey Crash (Ex Friends) comments on her experiences in punk 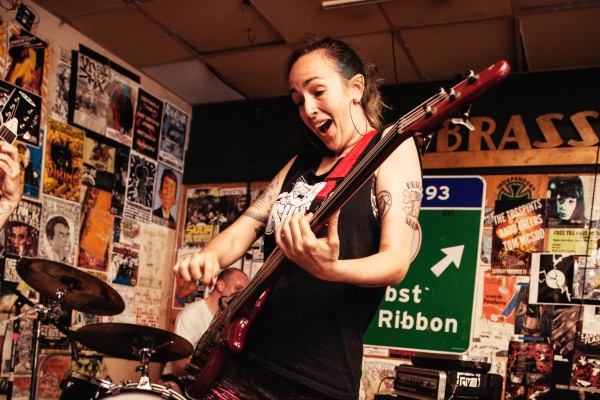 Audrey Crash is one hell of a bass player and singer. She kicks out tunes that are equal parts Conflict and Jawbreaker in Philadelphia's Ex Friends. Also, she's part of Mohawktown, a nine-or-so piece band that plays punk rock covers of Motown tunes. It rules. Also, Crash is a woman and, the cold fact is, right now, women are a very small minority of the punk/indie scene.

In fact, the debate concerning the experiences of women in music has intensified. Although the conversation itself is probably goes back to the first time a Mesopotamian hit a stretched goat skin with a stick, recently the conversation was re-ignited by Candy Hearts' Mariel Loveland's article "How to Survive Being the Only Girl in a Band. The debate continued with a reply article written by Allison Crutchfield of Swearin'.

Because the debate is so fierce right now, Crash decided to share her opinion. You can read it below.

I've come across a lot of debate lately about whether women who play music have a responsibility to champion equality, create safe spaces, etc. If that's what someone wants to do, I think that's great. But I just want to play. I love playing music with every piece of my soul. That "poof" sound my amp makes when I first turn it on revs up my heartbeat and makes me feel at home. I smile like a fool the majority of the time I'm playing a show. (So much for being a bad-ass.) I love playing so much that it's enough for me. I don't need to be recognized. I don't need to affect society. I don't need to talk about it. I do it for me because it makes me whole. End of story. If any of the above happens or if other people benefit from my music, that's fine too. Whatever.

I've been fortunate enough to have played in bands nonstop for the past 20 years. I've dealt with all sorts of bullshit dum-dums who say that I cannot play because of my gender. It doesn't happen even half as much as it used to, but when it does I still deal with it the same way: I shred their faces off. I play busy basslines, because that's what I like. But honestly, I also do it as a response to the people who tell me I can't:

"Is that your bass? You can't play that." Shred.

"You're the merch girl right?" Shred.

"Have you done anything notable that Kathleen Hannah would know of?" (This from a "feminist" promoter.) Shred your fucking face off.

No words could ever be more effective than shredding could to prove that despite my lack of a weiner or whatever, I can actually play.

I refuse to let anything get in the way of me enjoying my music. I want to have fun. I don't want to be angry all night because someone said something idiotic and sexist, so I let it slide and just play my bass. I leave the workshops, lectures, and traditional advocacy to people who enjoy it. Is that irresponsible? I don't care.

I'm a therapist in a psychiatric hospital. It's wonderful and fulfilling and I'm extremely privileged to be able to work with and bear witness to my clients' recoveries. It's also a huge responsibility. Part of that responsibility is to make sure that I am well enough to be fully available to my clients. I do that through playing my own music. I think that's a pretty legit reason to get a pass on doing activism, but how about this? All the dudes get to just show up and enjoy themselves, so why can't I?

I think that being a good musician, playing out, touring, recording, and putting on shows is advocacy within itself. That's not at all why I do it and in a perfect world, there would be no need to set the example that a lady can do all those things. So if you want to be an activist, more power to you. I'm just going to be over here in West Philly playing in all my bands. But please don't criticize me for not being an activist too, or I will shred your face off.

PS: I'll probably never write anything like this again, so while I have the floor I'd like to implore you all to never, ever put the touring band on last!

Audrey Crash plays bass and sings in Philadelphia bands Ex Friends and Pushin' It 2 The Limit. She sometimes sings and dances in Mohawktown and plays violin in Shitty Summer. She is also a practicing therapist and has been playing in punk bands for two decades. And she was serious with that whole shredding-your-face-off thing.