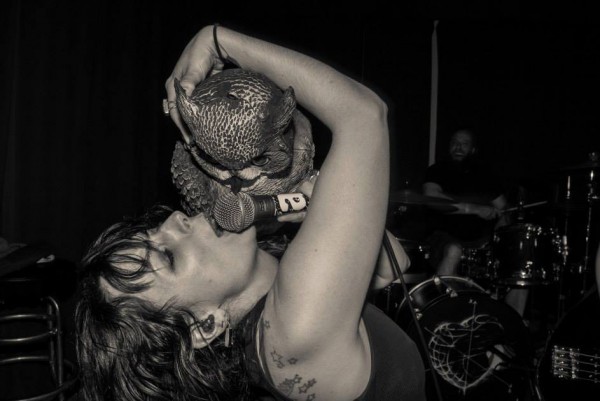 Itâs been a whirlwind for War on Women. In the span of a few years, the Baltimore band has gone from relative obscurity to being BFFs with Propagandhi and signing with big-time label Bridge Nine Records. As War on Women prepare to hit the road again with Propagandhi, as well as RVIVR, Punknews copy editor Adam Eisenberg caught up with vocalist Shawna Potter to talk about the bandâs pointed message, discuss how you can get married at a War on Women show and swoon over the worldâs most delicious pickles.

Youâre the newest members of the Bridge Nine Records family. Howâd that happen?

We just all had sex with all of them. No, Iâm just kidding. We had sent out or EP, Improvised Weapons, as well as a batch of new songs that are going to be out on this next record. We had really good demos. We sent all that out to a few labels -- some good ones, some bad ones -- to see if anyone would care, because we were really ready to record another record. They were on our shortlist of folks we even sent anything to, and after enough time had passed where we assumed no one cared and it would never happen, thatâs when we heard from them. We feel really lucky. I think Bridge Nine is the perfect place for us. Weâve been talking about being on that label in particular almost since the inception of the band. We were really happy to hear that they like us enough and they want to put out our record.

What can we expect from the new record?

Itâs longer [Laughs]. Itâs a full-length, so we have a little bit more room to do different stuff. I think the first EP is certainly more like what it would sound like if you came to see us at a DIY space, whereas this one weâre allowing ourselves to let it sound like it was recorded in a studio. Thereâs a little bit more variety with the style of the songs, just to make it interesting. If it was just 30-40 minutes of the same exact punk song, even we would be bored.

Chris Hannah and Propagandhi played a big role letting people know about War on Women. Whatâs it like to know you have fans like that?

Itâs surreal. Itâs so strange. Weâre going out with them next month. It will be our third time touring with them, and we still feel like, "Do they really like us though?" We still wonder about that and theyâve asked us to tour with them three times. After the first we were like, "Well thatâll never happen again, that was the best thing ever." Then they asked again, then they asked us again. So itâs starting to sink in that they do actually like us. Theyâre so nice as people. Theyâre nice to be around on tour, thereâs no weird stuff, thereâs no drama, thereâs no drugs and worrying about people dying. Iâm very conscious of the fact that without Chris Hannah responding well to us we might be in a different position than we are now, so Iâm just very thankful that heâs such a strong ally.

Your lyrics have a strong, serious message, but you also seem to be having a lot of fun. How do you maintain that balance?

I donât think I could do it any other way. I donât think we as a band could take everything so seriously, because thatâs just who we are. Itâs very genuine, the idea that we want to have fun while weâre playing these songs. The actual war on women thatâs going on globally, or at least in the US that affects me, thatâs enough of a downer. We donât need to be constantly reminded of how shitty things are for women and LGBTQ folks because I face it every day of my real life when Iâm not on stage, and sometimes when I am on stage, so we need that. We need to have fun and thatâs absolutely the way we are.

Honestly, being this band thatâs half women, thereâs already going to be plenty of folks who donât take us seriously just for that reason alone - who we are, how we were born - so in a way you just have to have fun with what hardcore punk can be because no matter what, people are going to question your motives, if you were really serious, or acting really high and mighty. Itâs almost like no matter what we do, we not only have a message when it comes to the welfare of women around the world, but just existing in hardcore, weâre taking on what it means to be punk, what it means to care, and play this heavy music. Itâs already a play on that, because the history of it has been so aggro and so male dominated. So itâs already off a little bit, itâs already different.

The poor treatment of women in punk, and in music in general, has been pretty well documented. Do you find that because your message is so clear, you and the women in your band deal with any less of that?

We still get our fair share. More so before we play, when people donât know whatâs going on. But you should see the looks on peopleâs facesâ¦ People are being nice, theyâre like "Oh cool, youâre in a band, whatâs it called?" I take a deep breath and I say, "Itâs called War on Women." The look on their face changes. Theyâre either going to be like, "Oh, hell yeah!" or theyâre going to be like, "Oh, ok." Especially for some men, even if theyâd be into it, they still donât know what to say because itâs a very challenging name for a band. It really does put our message front and center. Thereâs no question about what weâre singing about.

We definitely still hear things. On the last tour with Propagandhi - I think Iâve spoken about this publicly - there were dudes that were street harassing us while weâre on stage. Our show is not pop music, itâs not sexualized, weâre not selling that. Weâre a rock band and weâre putting on a good show and doing our best to make sure everybody has fun. Itâs so odd for people to be commenting on your body and telling you what they want to do with it while youâre on a fucking ten-foot high stage and you have a microphone and a PA to back you up. That certainly proves the reason that weâre here. It proves sexism is still strong in general, so of course itâs going to apply to play music. Weâre not immune to it. But for this band in particular, because of our message, because of what we mostly deal with content-wise and what weâre about, anytime someone does do something like that, weâre just like, "Thank you. Thank you for one more idea for a song." Iâm going to take what you said and write a song about it and someone else is going to hear it and be really happy that I was able to verbalize that for them because maybe they havenât been able to yet. So who wins? I think we win.

You mentioned street harassment, and I know youâre active in trying to end that sort of harassment in Baltimore. Can you talk about that?

I run the Baltimore chapter for Hollaback, which is one of the leading anti-street harassment movements internationally. Thereâs over 70 sites in a bunch of different countries and a bunch of different languages. I run the Baltimore chapter, so I put on events and I organize and I spread the word and I do workshops and real activist shit. Itâs letting people know that they donât have to put up with street harassment, that other people have their backs, and letting other folks know how to not harass. Letting the city know that there are better ways to interact with people, making sure folks now that itâs tied to this larger issue of gender-based violence. It really isnât a small, stupid thing. It really does matter, it really does make people feel like shit every day when they leave their house. I think that matters. I think women and LGBTQ folks should feel comfortable and confident in their cities and be able to move freely in public space.

Yes, and I want to do more of that on the road.

How did you get into that?

Iâve actually been ordained for about a decade now. It started as just doing it for a friend. It was like a joke. Then I came of an age where my friends really started getting married, so I did a couple of friendsâ weddings again and it really revamped my interest. It changed my perspective on it. It became this really meaningful thing that I could be a part of for two people who love each other. Cynicism aside on the institution of marriage, Iâm all about people in love doing what they want to do. It can be really transformative and amazing to witness that, to be there in the moment when theyâre saying this stuff out loud to their friends and family. Thatâs actually kind of cool. After doing it a couple of times for friends I thought, "Iâm not bad at this, I really like it. I also like weird extra ways to make money, so let me give this a shot professionally." Iâve been doing professionally for a couple of years and itâs going really well. Itâs my retirement plan because itâs something you can do into your 70s. I donât know if I can rock and headbang that long.

And youâre looking for couples in the cities youâre touring through who want to get married?

Yeah, definitely. Iâm not legally ordained in every single state, so I need to look on a website to see which states I can legally marry people. Iâll probably make some sort of announcement about which states on this upcoming tour I can marry people, and if anyone shows up with a marriage license, I will totally marry them on stage during our set, during Propagandhiâs set - Iâm sure Propagandhi would be cool with it too. Iâll sign the document for them. I would love that.

Youâre not the only one in the band with an interesting job. Your drummer makes pickles for a living. I got my hands on some, and they are excellent. Tannerâs! They are the best fucking pickles Iâve ever had in my life. I know that sounds easy to say, but they really are amazing.

Have you considered bringing cases of pickles on tour?

We always think about and then we forget orâ¦ On this tour, the first is actually in Canada and weâre driving, so I have no idea if we could even bring them across the border. We do swing back through Baltimore before the tour is over and Iâm sure weâre going to be giving some to Propagandhi and RVIVR, so maybe the shows after Baltimore weâll have some.

I think theyâd be popular.

Right? I love that idea, weâve definitely thought about it. But man, if one of those jars breaks in the van, you cannot get rid of that smell.