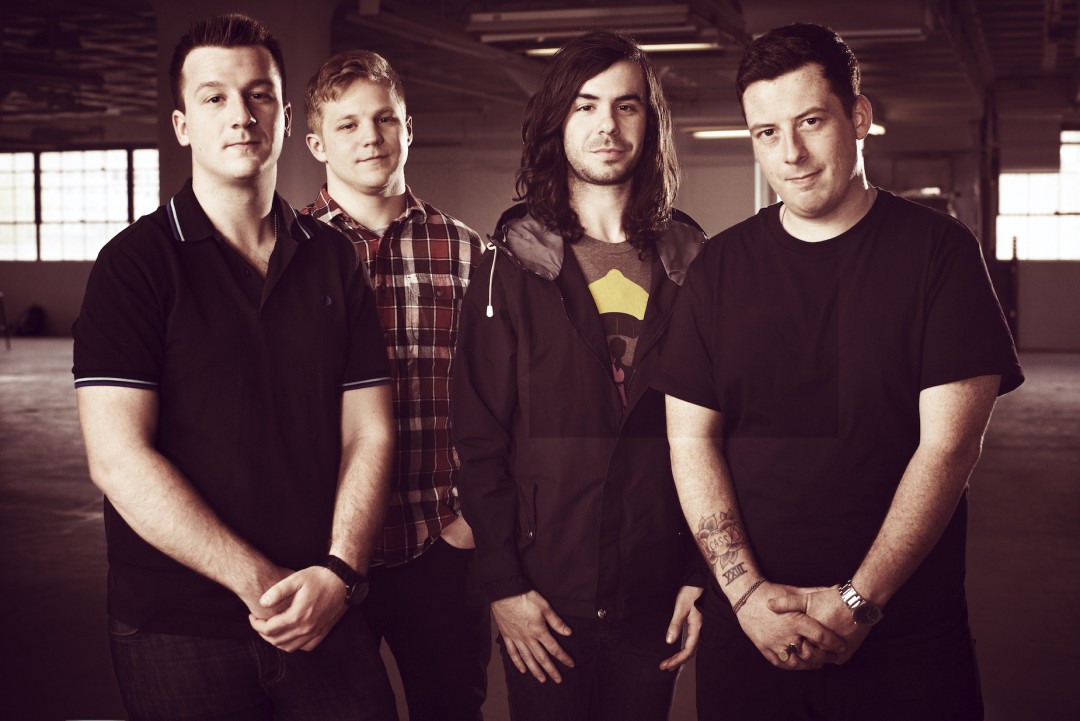 Sometimes relocation becomes an issue for bands who want to continue producing music. Make Do and Mend has proven that wrong.

While each band member is now living in a different place, they have quietly recorded and will release their third studio album, titled Donâ€™t Be Long, on Rise Records on February 24, 2015. Contributing editor Samantha Barrett spoke with guitarist/vocalist James Carroll about the new record.

What should listeners expect from the new album?
I think that they should expect a Make Do And Mend record. Every time we put out a record the reaction tends to be sort of different. I honestly like that, I would hate it if we put out a record where people were like â€œAh yeah, it sounds like the last record.â€ Itâ€™s got nuances, it got new things that we tried out and we never done before. Yet, it also got a familiar feel to it.

Speaking of the nuances, How is this album different from your previous releases?
Itâ€™s a more straightforward record than we have ever done before. I like to think of us as a straightforward band, we're not reinventing the wheel by any means. I donâ€™t mean that what we do is rudimentary or overdone or sort of in the same cycle. We take what we know and we take what we love and make it into something that expresses from our point of view. Itâ€™s certainly that but in a very, very straightforward way.

What is your inspiration for writing the record Donâ€™t Be Long?
Every record we have ever done has a general theme. I do not mean that in a concept kind of way. It all gets written in a certain period of time, how I am feeling during that time shapes the kind of songs and how the words go. The record, generally on the whole, is about being in a relationship and feeling as though you're trying and you're trying and itâ€™s just not going the way that you wanted to. The feeling like youâ€™re giving and giving and not necessarily getting anything back. I used a lot of my own personal relationships, significant other, the band, friends and families for that general idea. Thatâ€™s the general gist of things.

Members of the band are currently living in different cities, tell me about the writing process with this album?
Itâ€™s definitely interesting. We only got together a total of three times, just to make sure we were good to go. It was a lot of sending stuff back forth through the computer and a lot of cell phone voice notes. Thatâ€™s a very different process for us. All the records we have done previous to this one, we would be together for days and days in the same room trying to hash it out. There was no room for that this time. It was an experiment and we shared those ideas and molded those ideas remotely.

Do you think that with living in different cities it helped with the nuances of the new album?
That is a really good question. I think so. A lot of the times, for better or for worse, we would be in a room together, somebody will start to play something and somebody else will go â€œEhhh. You know what? Not really feeling it,â€ and they will go, â€œFine! forget about it!â€ You will throw that part away. Doing it this way it caused us to not do that. The parts got written sort of separate from the outside influence so when it came time to put it together. Of course there are always parts that needed moving and shifting. I sort of like this and I don't like that but we all had a lot more creative freedom with this record than we ever had before.

Having not heard any news from your band in a bit, Where you planning on dropping a surprise release on us?
It was very much a personal thing, making the record. At one point no one knew if we were ever going to make another record, we all decided to take some time away. When it came time we wanted to make another record we just wanted to do it.

PR campaigns kind of felt like filler, kind of like a distraction from what it was all about, writing, recording and playing. I understand that there is stuff that goes along with that, to make people hear the record. A lot of it was starting to feel like fluff. When we decided that we wanted to record, we just did it. We wrote all of the songs before we let Rise know we were doing it. It was as much of a surprise to them then everybody else. It just felt a lot cooler that way; we did it on our own terms without seeking anyoneâ€™s approval. They were pretty stoked. I don't think anyone was expecting it, to be honest. We were not exactly sure if this was something we wanted to do for a while there. Rise was definitely into it which makes things a lot easier.

Tell me about the title track, "Donâ€™t be Long."
It's the first track on the record. It speaks a lot to the general overall vibe of the record. There was this feeling of this sort of spirit that once existed and now is lost somewhere. This idea that maybe we can get back to where we once were, how we once felt, how other people once felt.

Do you guys have any tour plans?
We're going over to Europe in May to play a couple of festivals out there. We're also going to be doing a few release shows in the states and in Canada. Other than that nothing really firm.

Is there a band you have not played with that you're dying to play with?
Really good question. Dead Tired from Canada! I would love to play some shows with them. I am so bad at thinking about these things off the bat. I am sure there are a few more.