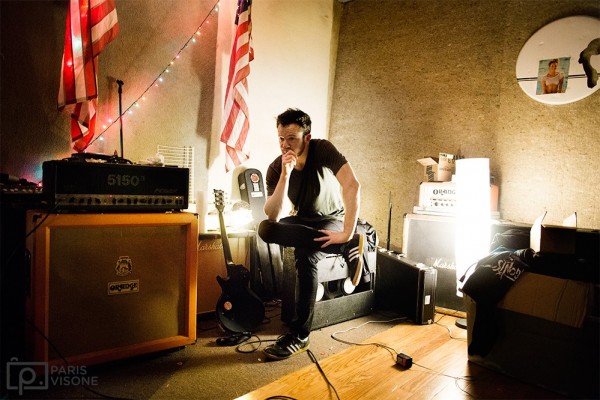 Boca Raton, Floridaâ€™s Protagonist has been working on churning out the best punk rock for 17 years. They have paved a way for themselves into the Florida scene. They have released their latest output, titled Jean Jackets in June, on the newly revitalized SmartPunk. Editor Samantha Barrett spoke with guitarist John Marullo about the new release and their tour of Florida.

You guys put out a record called Jean Jackets in June. Tell me about the album?
We recorded Jean Jacket in June with Pete Steinkopf at Little Eden in New Jersey, kinda where The Bouncing Souls practice sometimes. There has been a lot of other bands that have recorded there. Jean Jackets in June is five songs and it just came out on vinyl on Orlando SmartPunk Records. We're really stoked about these songs and for people to get it in their hands.

This album was recorded with Pete of The Bouncing Souls. How was it working with him?
Oh man! It was rad. We had the benefit of recording with some real cool people. Before Pete, our last record we recorded with Stephen Egerton from the Descendents in his studio and it was a very similar experience.

Pete is very nice and a kind-hearted individual. We just thought he would be a good person to produce these songs. He really helped us produce and round out the sound of these songs and he had a lot of good ideas. Protagonist is a band from Florida but we are all based all around the country, everywhere from California to Massachusetts to Florida so we don't really get a chance to get in the same room to write and go over songs. We got into the basement of Little Eden and Pete sat with us for two days. We went through what you can call the pre-production phase of the record. He was like â€œmaybe you should do thisâ€ or â€œlet's chop that part out.â€ It really just brought out the good vibes of what we were going for. It was great! I would definitely record with Pete again, anytime.

In the months before we went to record the record, Peter, my brother/singer of Protagonist, and Pete would talk back and forth about the songs that we have and what we were going for. I think Pete and Peter have similar musical taste, the records they put on in the privacy of their own homes. New Order, Morrissey, Joy Division, with a mix of things like Cock Sparrer, Strike Anywhere and Bad Religion. They kinda talked about the progression of our sound with The Chronicle and States, which is our other two records before this. Not that this is a rapid or stark departure but Pete kinda understood the vibe that we were going for this record. He was like, "yeah this is the stuff that I love" and he gets at some of those influences a little bit. At the same time this dude has written some of the best punk records -- the best records in general -- for the last 25 years. He is one great influence in sound and he has some really good ideas that you and I both know from his records.

What makes this album different from your older material?
We had two full lengths and a series of EPs. It's just a progression. I think if you have heard the first Protagonist record and then listened to this, they almost sort of the connects more than the previous record. There is a simplicity to this record that I donâ€™t think is present in The Chronicle or States. Protagonist is a punk band, that's what it is and what it always will be. Our influence is shining through the simplicity. It kinda has that big sound without a ton of noodling going on like on some of our previous efforts. Itâ€™s more straight to the point. Some of these songs Iâ€™ve been writing alongside the next Protagonist full length. This record will serve as an entryway onto what people can expect from Protag LP3.

How has the transition from working with Paper and Plastick to SmartPunk affected the direction you went with the album?
There was no kind of exit point with Paper and Plastick, we still have a really tight relationship with Vinny and Paper and Plastick. SmartPunk hasn't had their whole thing going on for a while, they weren't really an official label and they were working on getting the label back together. Our friend Jordan who also plays in a Florida band called Teen Agers was helping run SmartPunk. They knew that we were looking for a home for Jean Jackets in June and Jordan, Peter and Kyle who is our drummer said this would be a great first release on SmartPunk, to help their operation up and going. The dudes that run SmartPunk are good guys and it seems like a good fit. The people that run the label are people in bands and they are genuine and it is a good place to go.

You guys are currently touring with New Found Glory, tell me about the tour?
This tour will be the Florida Vacation tour, the record release tour of the vinyl for the new record will be this run of shows. Both bands are from Florida and more specific we're both from South Florida so this whole tour we are traveling our home state, going through a bunch of its major cities, from Pensacola all the way down to Miami. There are eight shows total and we are opening for New Found Glory every night as a two-band bill. We're really stoked that they asked us to come play this.

I recently saw a post of you guys starting a war with New Found Glory. What is up with that?
[Laughs] There are a few members of Protagonist, our friend Jeff of Divided Heaven who's playing bass on this tour and some members of New Found Glory are fans of professional wrestling. We're starting the tour together and were letting New Found Glory know we're not messing around.

You guys still identify with the South Florida scene even though you guys currently live all over the place, got any great bands from Florida you think we should check out?
When Peter and I were at Fest this year we made it a point to see bands from Florida that we have not seen before. The band Gouge Away from South Florida just put out a full-length record on Eighty-Sixed Records. That record is really good and they burned the house down on their set at The Fest. I would say that is the coolest band from South FL right now.