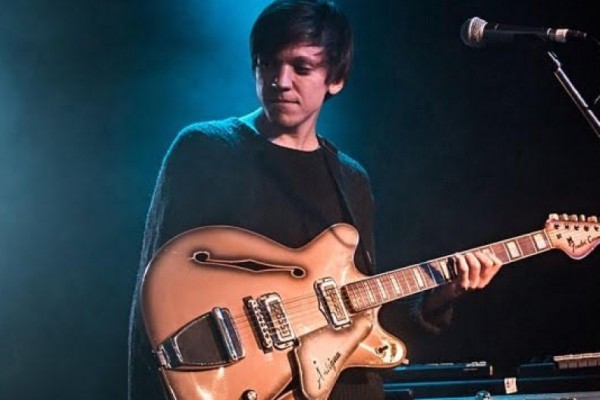 Recently, Thomas Fekete of Surfer Blood passed away after a prolonged battle with a rare form of cancer. Prior to his passing, Punknews Editor Greg Simpson had a chance to correspond with Fekete about his Burner album and other work. You can read Greg's interview with Fekete below.

The Legacy of Thomas Fekete

What started out as an interview is now tragically a memorial. Thomas Fekete, solo artist and guitarist of indie rock band Surfer Blood, had a rare form of cancer called sarcoma. It was found near his abdomen in December of 2014 and spread to his spine and lungs, and he finally succumbed to the disease on the night of Tuesday, May 30th. He was only 27. About two months ago, I sent some questions to Thom about his solo record, Burner. He was not up for talking on the phone. I received his thoughtful answers a couple weeks later, and sent a few follow questions. I waited weeks for a response and finally decided to check in with his Joyful Noise PR rep. We found out Thom wasnâ€™t even up for answering those final questions at that point, and it gave me a sinking feeling, alongside the updates from his wife Jessica via his GoFundMe page. I had a feeling Thom wasnâ€™t much longer for this world, and before I could finish this piece, he left us and thus the tone of this feature took a drastic and depressing turn. But letâ€™s take this time to celebrate all the great music Thomas Fekete helped create in a life cut short.

Surfer Blood is one of my favorite bands to emerge in the last decade, putting out albums that climbed near the top of my Best Of lists here on Punknews. I rated their debut, 2010â€™s Astro Coast , a 9 and their major label follow up Pythons a perfect 10, a score Iâ€™ve only given to a few new releases in my 14 years writing for Punknews. Last year the band put out 1000 Palms, which dialed back the big riffs a bit but retained that power pop perfection. JP Pitts is the singer and songwriter for the band, but Thomâ€™s fuzzy chords, guitar pedal prowess and catchy, singable lead lines were huge for me in a time when guitars seemed to be fading to the background in indie rock. 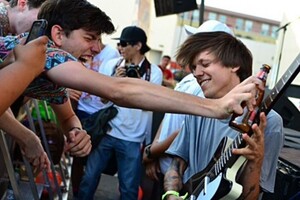 Though he isnâ€™t the frontman for Surfer Blood, Thom was often the mouthpiece to the press. When I spoke with him in June of 2013, they were touring in support of Pythons. He was in the van on the way to Salt Lake City and had no idea the diagnosis he would receive 18 months later. He was able to record on 1000 Palms but was too weak to tour, so the band headed out with a substitute guitarist and collected donations for him along the way. Some of these donations were stolen along with musical gear at a stop in a suburb of Chicago.

Thom was a newlywed when he was diagnosed. â€œI didn't touch an instrument for about three months, I wasn't even thinking about music,â€ he told me, and as a musician myself, I can only imagine the horrible feeling of being physically unable to do what you love. But as he started recording what would become Burner, â€œit poured out of me. Total catharsis.â€ With his limited knowledge of producing and recording, he cobbled together an honest-to-goodness lo-fi record, an incredibly eclectic collection of folky strums, fuzzy hazes, synth blips, experimental loops and psychdelic touches. Itâ€™s a world away from the taught power pop of his main band that had hit the road without him. More than Surfer Bloodâ€™s touchstone Weezer, Burner reminds me of Deerhunter and early Animal Collective, back when they were making the trippiest campfire singalongs ever circa Sung Tongs. He adds that Jessica Pratt and The Lilys helped get his creativity flowing, and that Chad Vangaalen was a big inspiration too, his records showing a vibe thatâ€™s a â€œbeautiful kind of evil.â€ I find Burner a great record to zone out to, and Iâ€™d imagine Thom did a lot of zoning out during his treatments, with little energy to do much else. â€œI love records that have to exist, if that makes sense,â€ Thom said, and Burner fits that category, a therapy of its own as its creator fought an aggressive disease. 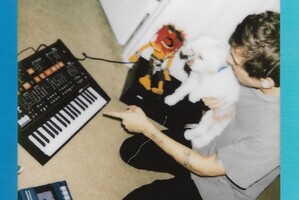 â€œI actually recorded the record for friends. I just wanted a project. It felt too weird to send around to anyone who doesn't know me personally. It wasn't until Joyful Noise asked if they could do a proper release that we realized it could be a way for us to raise a little extra cash.â€ Besides the sale of the record, his GoFundME page raised $67,000 from over 1,500 donors. â€œI want to knock on everyone's door and thank them and pay them back,â€ he said. While Thom had health insurance, his team of doctors opted to try some alternative treatments that were not covered. â€œI had tumor tissue tested against every type of chemo out there, which they were able to then photograph and show which drug killed the disease. I'm then given chemo in a low dose to protect my immune system while also killing the cancer.â€ And while Thom ultimately did not beat the disease, he felt he was in good hands and he speaks highly of the Weisenthal Cancer Group. â€œI cannot recommend it enough for anybody fighting this illness.â€

In addition to alternative chemo drugs, Thomâ€™s doctors were trying treatments even more alternative. â€œI'm also taking a gram of CBD/THC a day. There's a group of oncologists that work in a lab in California and have had amazing success treating cancer with CBD. Pot in general has been a total lifesaver. People don't realize how powerful it is. It's also expensive. In Florida, I can't see a pain management doctor because they test for weed and won't treat you if you're using it. Such an absurdity. Here is this person who essentially sells heroin [referring to opiods such as Oxycodone], but they won't help me if I'm smoking a bit of pot to relieve my debilitating pain.â€

To get back to his music, as I said before, Burner is legit lo-fi. Itâ€™s not the manufactured grit you find on so many records these days. â€œI love combining new technology with old. Like taking Logic's built in drum machine but running it through an amplifier into a four track. It's really fun to take something that sounds bad and manipulate it until it's cool. I also love busted ass equipment. It's just more fun when there's something there really challenging and limiting you.â€ He adds, â€œI wanted it to be a disaster, because honestly, my life is a disaster riddled with limitations. But that's also okay,â€ the words of a man coming to grips with what life has dealt him.

The first time I talked to Thom on the phone in 2013, it was obviously a more upbeat conversation, with the luxury of being able to bullshit about guitar nerd stuff, and this time around we still got a little bit of bullshitting in and I think it added some levity to a heavy time. I was curious about the squashed guitar lines at the end of the 1000 Palms Surfer Blood song â€œI Canâ€™t Explain,â€ guessing it was the legendary--and expensive--Fuzz Factory pedal, but itâ€™s actually a Dirt Transmitter pedal with a battery running out of juice. Genius. Gotta try that. On Burner, the 10-minute â€œMelk Mustacheâ€ is one of those zone-out tracks, looping for days and putting you in a trance. When I asked him about it, he said, â€œIt sounds silly, but I have zero recollection of even recording that track. I found it one night on my four track and thought it was pretty far out. I wasn't going to include it because it seemed a bit ridiculous. But the more I listen to it the more I like it. I can't imagine the album without it. I was pretty fucked during the entire process, not in a good way.â€ In both his main and band and his solo endeavor, Thom had the knack to find unique sounds by many methods.

That about sums up the conversation I had with Thom before he left this world, and Iâ€™m thankful he spent a few minutes of his last months on earth answering my silly questions for a silly punk website. Thanks for the music, Thom. I love playing guitar along with your records.

You may continue to donate to Thomâ€™s GoFundMe page to help support his wife and family in his funeral costs and remaining medical bills. And you should go download Burner at his bandcamp. The sweet translucent blue vinyl seems to be sold out from Joyful Noise, but hopefully they will press some more. 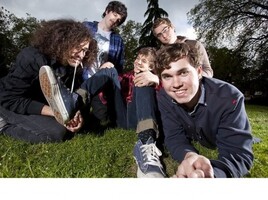 Festivals & Events: This Is My Fest adds more bands to line up