Ryan Young on Off With Their Heads Going Acoustic, Working With His Friends and More 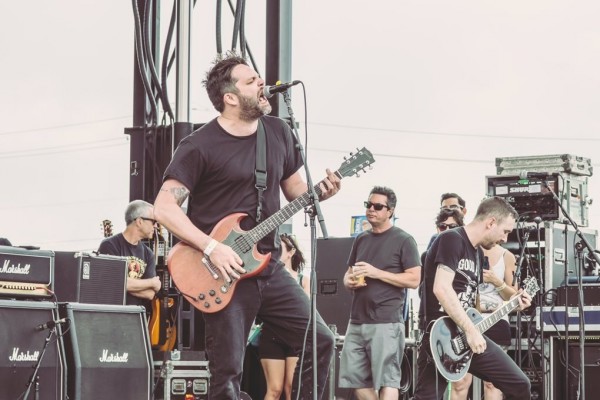 Ryan Young has to be one of the hardest working people in the punk scene. He repressed Hospitals for its tenth anniversary, he has been putting out new episodes of the Anxious and Angry podcast and maintaining his label and Off With Their Heads have been touring quite a bit. He has also been working on Off With Their Headsâ€™ acoustic album, which Punknews had the honor of premiering a track from earlier today. The title of the record is called Wonâ€™t Be Missed and it will be out on October 25, 2016 through Anxious and Angry and Epitaph Records (You can find the pre-order for the vinyl version here). So Punknews editor Ricky Frankel talked to Ryan about what went into Wonâ€™t Be Missed, the future of what Anxious and Angry will be releasing, what the band has planned for their upcoming acoustic tour and more.

I know a lot of musicians first write songs on an acoustic guitar then transition to electric. Was it hard to translate these songs from electric to acoustic?

Not really. We specifically chose songs that would fit a little better than others. I kind of wanted to pick songs that had some vocal power to them. I've always said that I am the worst singer alive, so it was kind of a personal "overcoming anxiety" thing. It did feel pretty good to do these 10 songs without the comfort of a full band though. Was Wonâ€™t Be Missed a completely DIY project? How was this different from working on past Off With Their Heads albums?

The whole point to doing this was to not be super picky about good takes. On "In Desolation", Clear The Air's lyrics were very cut and paste. On this version, we decided that there would be no punching in. That's why if you listen close, you can hear me gasping for air. We thought it was much more accurate. This record was just an idea at first. Just to see what the songs would sound like. Dan Jensen (my long time OWTH flexi record engineer / OWTH collaborator) sent me the first few rough mixes and we decided to actually make a record out of it. Just something to do between actual records. I personally wanted to do a record without any outside influence at all. The old "Good Enough!" model was used a bunch on this. So from that to the layout, it was all done by just a couple of us. â€œClear The Air,â€ the song that Punknews premiered was done really well. Who is playing the piano? Why did you decide to add it in there?

That was me. I used to have a lot of organ and otherÂ auxiliary instruments on old stuff. This seemed like a good time to bring that back. It's literally just one finger notes to add a little sumpn' here and there, but it did the trick. Again, good enough!Â  Who is doing the backing vocals on â€œDonâ€™t Laugh?â€Â

All of the backing vocals were done by Nice John. I believe I asked Dan to "Make him sound like he is dead and leaving his body". Sounds about right. Were there any obstacles that you didnâ€™t expect with writing and recording Wonâ€™t Be Missed?

Not really. Since the songs were already written, that's the tricky part. We attempted to do a version of "Don't Make Me Go", but it just didn't work. We figured that song was already soft enough as it was. I think that's why we play that song louder when we do it live. It is a lot more fun to play with some noise than it is to keep it soft. Did you look to any acoustic-based artists for inspiration for this record specifically? What are some acoustic releases that you would recommend?

Not really. I just remember when Against Me! did that acoustic EP of some of their jams stripped down. I liked the idea of that. Something extra for people who already dig the band. I'm not really trying to get anyone new into our band with this. Just something new to kick out while we work on our next massive failure. I find the album art for this record particularly interesting and haunting. Where is this? How did you decide on using it? How is it connected to the title and music?

My friend Shannon O'Toole from Pittsburgh goes around to abandoned buildings and takes amazing photos. I've always loved flipping through her photos, so I asked her if I could use one for this project. I didn't have a title for the record in mind until I found that specific photo of an abandoned morgue. I thought it was pretty cool to look at that and realize that's where we will all end up at some point. Then the title "Won't Be Missed" came from my own thoughts about the things I do. I obviously think highly of myself. The record cover itself was my take on The Jesus and Mary Chain's Darklands record. I love how simple it is. So I based it off of those things. I don't think it's spectacular art on my side of things, I'm just happy I was able to learn the program and lay it out all by myself. Like an adult. Other than the fact that this tour will consist of acoustic performances, how will these shows be different from typical Off With Their Heads shows?

Honestly, I'm not sure. We did one show inÂ Massachusetts a while back. We didn't practice and just kind of winged it. I got blacked out and was too nervous to pull it off. Since then, we have gotten much more comfortable with what we are doing. Little things make a big difference. I did the first show sitting down, which felt uncomfortable. I told John that I am going to get a strap and stand. He told me to have fun with that, because he is going to sit. So we decided to make him his own throne like some sort of spoiled prince. So if anyone wants to feed the king ofÂ millennialsÂ some grapes while he sits on his throne of luxury, I'm sure he wouldn't mind. But as far as the shows go, I'm encouraging the people booking them to make them slightly more fun than your typical acoustic show. I want to incorporate comedians and spoken word type shit into this. I think we actually have a magician opening one of the shows. The point of all of this is to go out and have a good time. To forget about all the bullshit from your regular life, have one too many drinks and have some fun. This is definitely not for people who respect musical ability. I have none of that.Â  Now that the acoustic album done and coming out on October 25th, when do you think that the new [[Off With Their Heads]â€™ album will be done?

We are about 3 songs into a new OWTH record as of [right now]. I'm finally in a spot where John and I get together once a week and work on songs. It's going to be cool. As far as a timeline, I have no idea yet. I figured that if we waited this long, I might as well take my time to make a record I finally like. How did that benefit show for Pattie Hummel go? How is she doing now?

The benefit was great. It was rad to have all the support from all of my friends that played for her. It was pretty crazy that almost none of my personal friends or family showed up to the show, but a heavy amount of strangers showed on a Tuesday night. That, to me, says something. We have one more benefit planned for her in Chicago at Liar's Club on October 23rd. This one will be OWTH, The Bollweevils and The Brokedowns. We are also setting up a free taco buffet. So we all know who the real headliner is on that one. Pattie is up and down. She was in the hospital the whole week I was gone, but back home now. She is incredibly grateful to everyone who is helping her through all this garbage. You recently announced that you are putting out Deadairesâ€™ (featuring Andrew Seward former bassistÂ of Against Me!) self-titled album through Anxious and Angry. What is the story behind working with that band?

I really love Andrew. He is a genuine guy who loves music. He's also super mean to me, so I respect that to some degree. He just sent me over a record to check out. Ranae and I listened to it and really liked it. It doesn't sound like anything in my regular rotation, which I think is a good thing. I felt hints of Archers of Loaf and bands like that in there. So we just started talking about it. I think it is moving along a lot faster than anyone thought it would. I realized the other day that I really like putting out records / running a label and that it's something I should pursue. Then I realized that I'm on my 12th release already. So I might as well keep it up. I just want to work with diverse bands that I consider friends. So far, so good. The last time we talked you announced that Anxious and Angry was co-releasing Morning Gloryâ€™s new EP Post War Pslams , which was an amazing record. Do you plan on working with Morning Glory or Ezra Kire again?

Ezra has been putting music off to the side lately. He is getting his goddamn pilot's license! That guy is always up to something cool and weird, hence me loving him so much. I actually DO have a project on the horizon with him. I believe my sales pitch to him was something like "Let me try and do what seems to be impossible: Get people super into the incredible music you make." It's pretty rare that I connect with music on the level that I have with his. I discovered his songs at a time when I felt like he was the only other person who would understand what I was going through. So blindly emailing him and telling him that led us to the friends we are now. Probably helps that both of us are insufferable blowhards who walk around on stubs because we constantly shoot ourselves in the feet, but hey. What can you do? Is there anything else that you would like to add?

I'm kind of in this phase of my life where I'm really appreciative of everyone supporting myself and my friends in what we have done all these years. I, personally, haven't always been a terrific person. It took a long time to realize all the dumb shit I've done or said. I know it's meaningless to have a blanket statement apology, but it's the best I can do sometimes. So maybe all my guilt from years of shittiness has fueled all the charity work we have been doing the last few years. I guess if I could add anything, it would be that at any given moment, you can decide to turn shit around. Some of us struggle with bi polar / depression / anxiety that goes untreated and you think there is no way out. That's the choice you make: to not seek out some change or help. Make the choice to chip away at that shit. Even if you can dull that pain a tiny bit, your quality of life will improve. Promise.