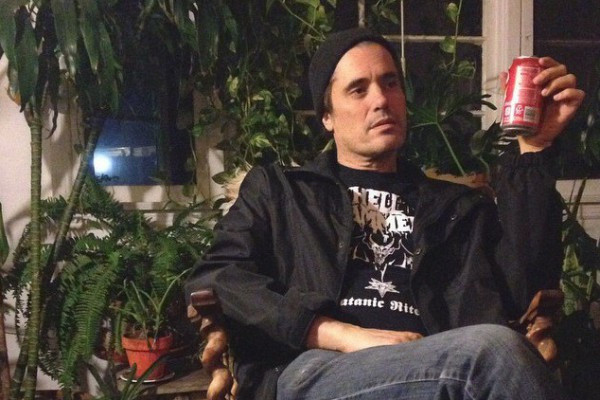 Some people seem to have a direct link to the Muses and Jesse Michaels is one of those people. Creativity just radiates from the guy. His indelible mark is already imprinted in history via three of his amazing, influential bands: Operation Ivy, Common Rider, and Classics of Love. Each of those bands found Michaels writing fundamental truths in poetry of unparalleled finesse. But, on top of that, Michaels has equaled or even surpassed his musical accomplishment with his visual art. Featuring iconic imagery poised in abstract situations, his drawing and paintings are as distinct as his musical output, and equally daring. But, whereas many of Michael's songs seem to be rooted in profundity, his paintings are a bit more mysterious- leaving it up to the viewer to find the meaning and twists within.

Michaels has launched a site where you can view and buy some of his original works and prints. So, to that end, Punknews' John Gentile called Michaels up to talk about his creative roots, painting, and why noir is so cool.

What got you interested in the visual arts? I have drawn and painted since I was three years old, so it was something that I’ve always done.

Did you ever have any formal training? I took a lot of art classes, but I mostly just drew whatever I wanted in those classes. My training consisted of copying comic books and then being influenced by punk art in the 80s, and more recently I took influence from the modern and contemporary painters and have tried to incorporate it in my style.

Did you get anything from the art classes? To tell you the truth, I was always sort of lazy and undisciplined about learning how to draw and I was not a great draftsman. It was mostly hours to do art, but I was not a great student.

Do you think art school is good, or is it detrimental to style or technique? I think technique is important. I wish that I had spent more time paying attention and I do think it can be taught. I don’t think talent can be taught. But, the thing about art, is a lot of it is very mechanical. Even if you are not very creative, so to speak, you can still learn to draw.

What do you enjoy about painting and drawing? When I paint or draw, I go into a space outside of the world with its normal problems and into a place of pure imagination and possibility. It’s sort of like an altered state. I’ve always liked drugs so it’s sort of like a drug.

When you create a work, are you creating a message for other people, are you creating just what you see in your head, or is it a combination of the two? Well, when I’m creating a work, I might have some idea of what I want to do before I start, but the work is always an end in of itself. You don’t create it with any other thought than to just create it. That’s what’s enjoyable about making art is it really puts you in the moment.

How structured is your process? It’s pretty structured. I do the under drawings first, always. I always start with a drawing and then I add the paint afterwards. I don’t plan what colors I’m going to use. That part is improvisational. I always do series of paintings where I do the same painting over and over. It’s still fun because I will improvise within the limits of the paintings. It’s very fun for me to see what will come out.

If we look at Andy Warhol, or Brian Walsby, or Nick Blinko, or even Francis Bacon, they each have works that are a series. Is there a greater thing than can be garnered from a repeated series than just a stand-alone piece? Not really. Although, there is something to be said for sticking to one theme and doing it over and over- someone like Frida Kahlo does a theme over and over again. Philip Guston would use the same figures over and over again. When you have a single theme, it’s like digging a hole deeper, rather than just digging a bunch of small holes. It can leave a deeper psychological impact.

It seems to me that art is more in the national discussion than ever before, but it also seems to me that artists are getting paid less than ever before. Well, the problem with art, is that there are a few artists making a whole lot of money and a lot of artists that aren’t making any money at all. Much like the other financial breakdowns in other parts of America. It would be nice if there was a little less of a wealth disparity in terms of people getting paid. I understand that art is not democratic- some artists are better than others. But, often times, it’s the artists that are the most fashionable, not necessarily the artist that is the most talented, that gets the millions of dollars. I think more artists should get more money and I think the ultra wealthy artists should get less.

Now, feel free to take a pass on this, but right now, Basquiat is very popular again. I think he’s cool, but I don’t his works really warrant twenty, thirty, one hundred million dollars a piece. I like Basquiat, but once again, the rate that his paintings are selling are part of collector fashion and capital gains. It would be nice if he got paid while he was alive like that. He did pretty well, don’t get me wrong, but he didn’t get twenty million a painting. I think he’s a great artist. I love his stuff. But, I think it’s ridiculous. The classic example is Van Gough, who died broke, but now his shit goes for a hundred million dollars. The art world couldn’t see him at the time because he was out of fashion. It would have been nice of he was rewarded while he was alive.

I’m a big fan of your noir works. With those works, they often seem to have an ambiguous set up- like I’m not exactly sure what is happening in the scenario. Well, you know, if you get into the process of making “real art,” what is gonna come out ill be somewhat mysterious. With “real art,” if you will, it comes from the subconscious. It comes from the world of dreams. Even if you see a painting, that is totally realistic, by someone like Vermier- there is this world of mystery even in the world of the most classical painters, if there’s enough talent. So, without making an assessment of my own talent, I will say that when my paintings are successful, there is always something mysterious or dreamlike about them- so that’s what you’re going after.

Have you ever had to deal with unauthorized use of your work? I think people have made a lot of t-shirts out of my stuff, because I’ve made so much stuff for bands. So, there are probably thousands of bootlegs out there. It’s no big deal. If you start worrying about shit like that, you just give yourself an ulcer.

A lot of your current work deal with punk rock icons- Strummer, H.R., X, David Bowie… when you represent these people, are you seeing them as an ideal, or as an actual person with flaws and eccentricities? I’m not really trying to convey something about the person- I’m just trying to represent an image. In the same ways the classical painters would do religious icons or Andy Warhol would do Marilyn Monroe, and so on, there’s something to be said for painting figures that are iconic that are already in the subconscious of the viewer. I like to try to take the images, that viewers already know, and try to add a depth or mystery to them to make it something new.

What’s the status of your film 5,4,3,2,1? The film is done. It came out. I’m happy with it. We’re going to do one more round of festival entries, and then I’ll release it on Youtube.

What do you have in the works? Right now I’m working on a webs series. I’ll release it if it is good. I don’t know if it’s good yet- I haven’t watched it. Basically, we shot the whole thing and I acted in it- but I don’t know if I’m a good actor. If it’s good, we’ll release it. If not, I’ll throw it in a hole somewhere. I’m going to do more paintings. I’m going to do a poster which is gonna be a big drawing like the older stuff that I used to do. I’m definitely going to do more film projects.

Is there a chance that we might eventually see the return of your character Yunkie? I haven’t thought about that, but we’ll see. There’s always a chance…