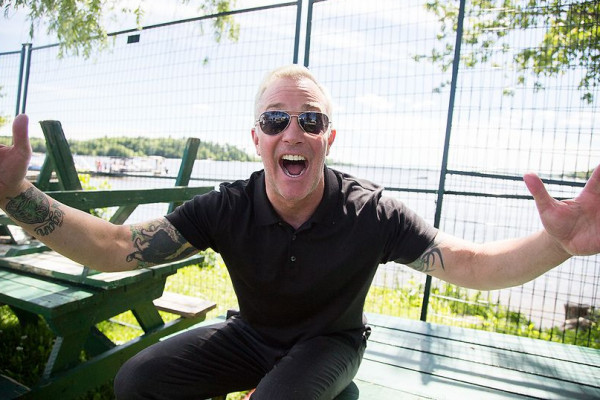 Goldfinger recently released their comeback album, The Knife . So, to cut to the heart of the matter, Punknews staffer Julie River spoke to band founder John Feldmann. Check out the interview below.

It’s been about nine years since you put out an album. You said in 2015 you were probably done putting out Goldfinger records. What changed your mind?
(laughs) I’m just curious, where did I say that?

That was in an interview with Fuse TV from a few years ago.
I’m only asking just because, I want to say probably four out of five interviews I’ve done for this record they said that, so it must have been sort of a big what. I probably said it once in one interview and it’s come to haunt me, which is fine, it’s just hard to hear it.

I want to say at one point, look, I mean I have children, and a wife, and I’ve got a job and all sorts of stuff that want me to stay at home and want me to be here rather than on tour. And touring is extremely difficult the older you get, and especially after I’ve toured—I mean, I’ve probably played ten thousand shows in my life. So it was the middle of the crazy 5 Seconds of Summer whirlwind thing, and that chewed up like four years of my life, going on the road, writing songs, and making records and living in that kind of pop global world. It was like I couldn’t even think about diverting my time elsewhere. Which is great. It was a great learning experience, it was awesome. But then part of it is watching. Whenever I hear a really good live band, I get that itch to get back on stage. And then after watching the comeback of Blink, and 5 Seconds of Summer, and All Time Low, and Sleeping with Sirens I just felt like, yeah, maybe it’s my time to go out and have fun before I’m really too old.

And for this time around you have a whole new line up. And, normally, when people put a new line up behind them, they get some no-names, and you did not do that. You’ve got Mike Herrera of MxPx, you’ve got Philip Sneed of Story of the year, and you’ve got arguably the best punk drummer of all time, Travis Barker.
What’s there to argue?

(laughs) Should we expect the same old Goldfinger, or is this a really different record?
The album is absolutely that. I play guitar on a lot of it, Mike Herrera played a lot of bass, and Phil played some of the guitars. We made, it’s like a competitive Goldfinger record, in my opinion. It’s just subjective since I’m so close to the to the project. But, that being said, I keep going back to “Put the Knife Away,” I’m really happy with the way it sounds and feel like lyrically it’s very in line with where I am in my life.

And I still think Travis is, I think he’s just the best drummer of all time. Even in the hip-hop world I don’t know that anyone can really do what he does. He can do anything. He’s physically a great drummer and it was an honor to have him on this record. I’m very happy that Blink let me borrow him.
Have you been keeping in touch with any of the old members of Goldfinger?
Simon Williams, I probably talk to him about once a month. He played on Hang Ups and the first album, and he has a kid and works for a computer company, and we stay in touch. And Kelly LeMieux, he replaced Simon, I probably talk to him twice a week. He quit Goldfinger I want to say three years ago to join Buckcherry. He’s been with that rock band four years, maybe five years at this point.

I have not talked to Darren or Charlie, gosh, in years. And, you know, I hope they’re great, I wish them the best. We definitely grew apart and had very different visions for what we imagined Goldfinger was going to be. You know, it’s really difficult being in a band, especially when you’ve played in thousands and thousands of shows, and everyone grows apart, basically, and starts getting different influences and it was just not meant to be.
So, you’ve been producing for other artists since Goldfinger’s been away. Does it feel weird to be the artist again and not the producer?
Well, when I was really just an artist we had a manager, and A & R, and radio people, and marketing people that would all weigh in on my songwriting and what the albums looked like, where this time it was really different in a lot of ways. I was really the barometer in that I think we co-wrote maybe three or four songs out of 12 and everything else was just me. And me and my team, me and my two producers, Matt Pauling and Zakk Cervini co-produced and mixed the album, and they were my only other opinions. So that was really freeing to be able to do really whatever I wanted, because even in the times where Goldfinger was my main job, I had other guys in the band who had opinions on my lyrics, my melodies, everything. And so it was cool to know what I really wanted to sing about. And because I got to co-write with so many other artists, to be able to write only for me, only from my perspective. And I lot of times I’m writing for other people and, as a 49 year-old man, my perspective on life is just different than an 18 year-old kid’s.

Do you think you’re going to keep doing the producing side as well after this tour and album?
How I support my family is by producing albums. I just like the idea of connecting with music fans and to go to shows. 2017 seems to be all about the music. You can look at what t-shirts the kids are wearing and talk to them about what they listen to. And also, we played Portland and Seattle a couple days ago on Warped Tour and 80% of the people had never seen Goldfinger before, because we haven’t really been touring in so long. To be able to win over new fans, looking out in the crowd and just seeing 12 year-old faces at a Goldfinger show is pretty fucking awesome.

Do you think you’re going to keep making music with this new lineup going forward?
It would be really hard to record drums with anyone. I mean, Travis is the best drummer I’ve ever worked with. But, who knows? It took nine years to put this album out and maybe it won’t be as long the next time. But, I mean, Mike’s got two kids and Goldfinger played our first show with MxPx I think around ’96, and he’s just a long time friend, and one of the nicest, and coolest, and handsomest men I’ve ever met. And he’s a lead singer and he just sings so great on stage. And Phil’s got five kids. We’re just like-minded. We have very similar lives, taking care of the family and everything. So it’s really been an amazing experience touring with people that are like-minded.

I’m curious, I love that album cover that you have for the new album. Where did that come from?
You know, I had a t-shirt back in the day when I was selling shoes. A friend of mine was an artist and he had designed a t-shirt with, I had this idea, kind of interesting, I’m buying a couple Banksy prints and some posters and he actually has a piece of art that’s kind of similar as well. But I had a t-shirt design back in 1994 that was Goldfinger’s first t-shirt ever that had the same sentiment, with the girl that’s sort of ready to murder the boy and the boy’s just lovesick and ready to give his entire being to this girl. And it’s just the eternal emo heartbreak kid that’s just always choosing the wrong woman.

Thank you so much!
Thank you!

Videos: Rozwell Kid: "Wendy's Trash Can" at Live! from The Rock Room