Seth Anderson: On the Road to Fest - Diary 9 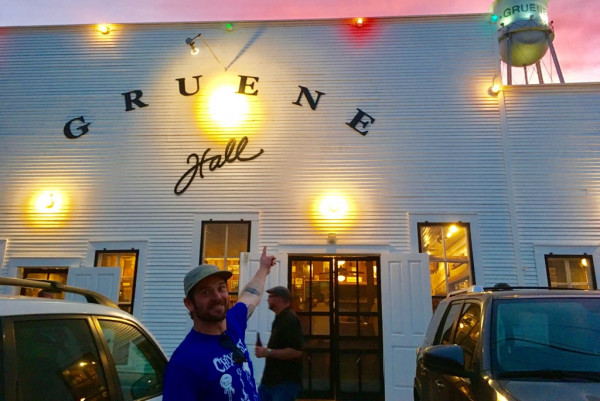 Seth Anderson is going to Fest. The Calgary-based singer/songwriter, signed to Joey Cape's One Week Records, is on the road touring with labelmate Yotam Ben-Horin of Useless ID. They're headed across the U.S. on a journey of self-discovery and rock'n'roll, making the month-long trek to Gainesville, Florida to appear at The Fest. As they make the voyage, Seth'll be sharing his road diary with Punknews.org & Some Party. This is entry nine in our series.

The dollar store cowboy hat given to me by a dear friend sat on the dash of the van and stared. His visiting sister had bought it while in Calgary, Alberta a couple years back during the Stampede and left it behind. He hated it. Well, he hated any hat that wasn't camouflage or had a fish on it, but that's beside the point. I needed a hat to block the sun. It had since coming into my possession taken up strong residence in my travels taking on the official title of "van hat". I recently owned/lived in a 1992 Ford E-150 Rodeo Wagon, and when a long drive was approaching, it would go on. Like putting on a pair of steel toe boots, grabbing a set of gloves and going to work. Since entering Texas, I could tell, it felt wild. Like a captive horse being taken back to the open plains. It was home in the land of cowboy hats. Ready to mingle.

If you recall the last diary entry, we were heading to Dallas on the heels of a humid night's sleep in my Dodge Grand Caravan outside of Oklahoma City. As we crossed the Texas state lines, everything seemed to get bigger and bolder, as the slogan boasts. The home of Willie Nelson, Tex-Mex cuisine, and the most on point drama of the 1980's, DALLAS. Come to find out, that's not all Texas has to offer.

The first show we would be playing on a bill with our friend, Greg Rekus. We had been crossing paths every couple of weeks over the course of the tour so far. First in Seattle, WA, then Bakersfield, CA, and now in Dallas, TX. If you have ever seen a golden minivan with a 5 ft x 5 ft stage with bolted on legs strapped to the roof barrelling down pretty much any highway in North America, it was most likely him. I first met Greg in my early twenties when his skate-punk band, High Five Drive, would regularly stop in my hometown to play all-ages shows. They had a crazy amount of energy. Greg had taken that and compressed it into a solo act featuring said stomp stage, and an array of tambourines and other percussive features taped to the platform. A true road warrior. He's been touring Canada, Europe, and the US for a long time and was very helpful to me in my mission to attain my visa to play south of the Canadian border. We will meet again at the coveted FEST in Florida.

Hospitality is something that they don't take lightly in Texas. We spent two shows playing with pals, Dead Words. The second of which was at the singer Garrett's mom's place. It started out with punk bands in the barn and evolved into an acoustic unplugged backyard show. Friends of Yotam, Mark in Dallas and Amir in Austin, housed us, acted as tour guide, and kept us fed. Then as we made our way to Universal City outside of San Antonio for a show and a day off, we met Gene Reeves. A punk rocker turned country slinger. This was the part of Texas that grabbed my attention. We visited Gruene Hall, a legendary country music venue that was little more than an old barn with a makeshift bar in appearance. In reality, it is where musical heroes have been made. We sat waiting for a band to play at 6 pm on a Wednesday evening. What began as a sparse crowd, slowly turned into a packed house with a full dance floor. People of all ages. There was a ninety-year-old lady that danced circles around everyone in the place. It was more than a venue. It was an institution. The whole region was full of music venues and appreciative crowds. Definitely, a place that would be worth a return visit to, who knows, maybe cut my teeth. It had an organic down home feeling that reminded me of the small community gatherings my family would frequently attend when I was a kid. We were located ten minutes from the closest town, which boasted a population just shy of 800. The phrase, "Going to town." was taken with seriousness and received with excitement.

Most of the small towns that I have grown to love seem to be fading, or losing steam. As people are migrating to cities in search of brighter futures, where does it leave the places that made us who we are? This region of Texas gave me hope that maybe they can return to the thriving communities that they once were. And don't get me wrong. I'm as guilty as the next person, leaving home at sixteen to pursue dreams of one day playing in the NHL. Returning for short stints, but never able to fully dig back in. But I have always been drawn back. Like they say, you can take the kid out of the small town, but you can't take the small town out of the kid. Now calling another town home that is growing out of our grasps and turning into a weekender metropolis, it is hard to say what the future will hold. Maybe I should just buy another Rodeo Van and hit the road, or maybe set up shop down by the river, using loose leaf paper for rolling doobies. Not a bad idea.

Interviews: Neil Wayne and Josh Lewis of The Bombpops