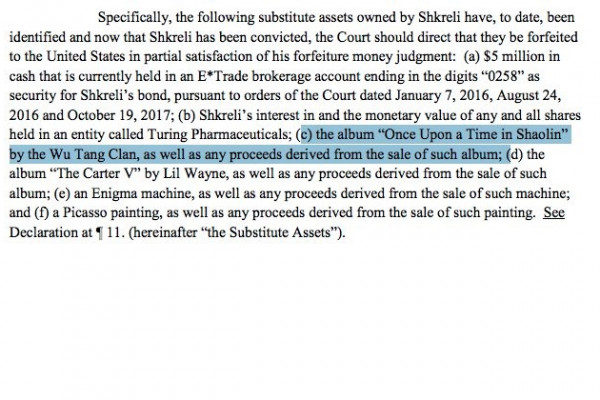 Some time in 2015, Martin Shkreli, who raised the price of a drug that helped treat HIV from from $13.50 a pill to $750, bought the one-of-a-kind Wu-Tang Clan album Once Upon a Time in Shaolin for $2 million directly from RZA himself. That sale made the album the world's most expensive album, blasting past Elvis' "My Happiness" acetate which is worth a paltry $300,000 and rocketing past Beatles serial #1 worth a measley $790,000. Ten weeks ago, the album appeared to have been sold by Shkreli to an unknown purchaser for about a million bucks. Meanwhile, Shkreli was also convicted of three felonies relating to securities fraud.

Just yesterday, as part of post-conviction asset execution, prosecutors asked Judge Kiyo Matsumoto to seize $7.4 million in assets from Shkreli. Included in those assets was the Wu-Tang album, or profits from the sale of the item if it was sold (no one seems sure who owns it right now). Also, surprisingly, the government asked for Shkreli's copy of The Carter V by Lil Wayne. The feds also asked to seize Shkreli's Picasso as well as his holdings in Turing Pharmaceuticals, the company that took Daraprim, a relatively inexpensive pill that many people relied on to live and raised its cost by 5,000%.