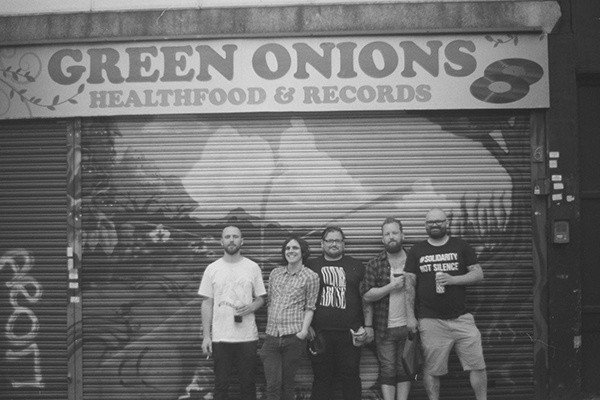 Punknews is incredibly excited to premiere the first music from London quintet Mean Caesar in the form a new video, "South London Summer." The track comes off of the band's debut, self-titled EP, which is due out October 5th on Little Rocket Records.

Mean Caesar has been described as a cross between Leatherface and Samiam, and features musicians, both ex- and current, of a bevy of bands across the UK (way too many to go into here). Needless to say, there is a lot of experience under this band's belt, and it shows in their song-writing and composition.

Having had the chance to preview the EP in full, I can only say the description above is spot-on. "South London Summer" is a perfect example of this, with the sound being both chunky and playful at the same time, and a vocal cadence that evokes Jason Beebout on his best day.

Vocalist David Webster has this to say about the song:

'South London Summer' is a reflection on some really dark places that my mind has been to in the past. I think everyone encounters some pretty bleak situations throughout their life, and it's important to counter those times with an appreciation for how making positive steps, and accepting the help of your community, can help turn the tides. It's a love song to the people in my life who've cared enough for me to make me a part of their world, and in turn have helped me appreciate how great life can be.

Little Rocket Records head Graeme Philliskirk (of Leatherface and Medicatation fame) also wanted to get a word in about working with Mean Caesar:

As soon as I put Mean Caesar on in the studio, pushed the slider up, the full impact of the bands raw emotion and power hit me.

The fact I’ve known Lester for years and we are from the same neck of the woods, didn’t sway me one bit, it was what I was hearing both musically and lyrically. After seeing them carry this out live, Mean Caesar are the type of band that fits with Little Rocket, it’s the start of bigger things for this band for sure.

The album is up for pre-order starting today at the Little Rocket Records Bandcamp page. Mean Caesar will also be holding their record release gig in London this October. You can check out their new video, and the details of that gig, below.

Listen to the new EP by Fucktomb!