Alone in a Crowd to reunite after 30 years for benefit 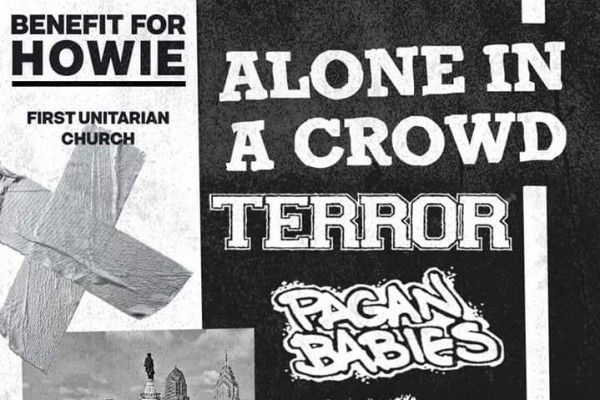 In 1989, a group of New York hardcore musicians formed the side project Alone in a Crowd. The band recorded one 7-inch EP and played one show at Anthrax in Connecticut (a few stray tracks trickled out in the subsequent years). After 30 years, the band is getting back together to do a second show. It's a benefit for their guitarist Howie Glen Wallen. The show is February 16, 2019 at the First Unitarian Chruch in Philadelphia. Other bands playing include Terror, Pagan Babies, Maximum Penalty, Break Away, Let Down, Search, and Nowhere Roads.

The band stated: In the spring of 2017, Howie was diagnosed with an acoustic neuroma: a slow growing tumor originating off of the auditory nerve between his inner ear and his brain. The tumor affected his balance and ability to walk and caused right side functional deficits. In May 2017, he underwent a 6.5 hour surgery that was supposed to have him back up and running in a month… The surgery, which left him deaf in his right ear, did not remove all of the tumor… and it is growing back. Howie now suffers from chronic debilitating headaches; loss of balance; cognitive, memory and speech deficits; a tremor in his right arm and hand; vision problems; facial numbness; extreme fatigue, anxiety and, understandably, depression. With these disabilities he cannot work, and that has hit his family very hard. And, as the tumor grows, Howie’s symptoms will only get worse. If left unchecked, Howie’s condition is fatal. So, Howie must have another surgery, a 10 hour surgery, followed by radiation treatment. We can only hope that after this he will improve… but there is no guarantee."