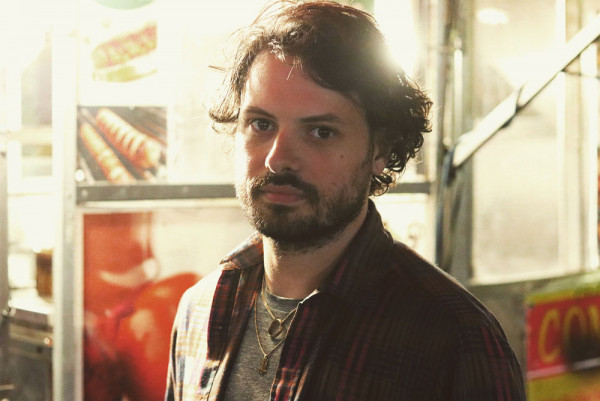 This May musician Drew Thomson, the frontman of London, Ontario's Single Mothers, released a new EP as The Drew Thomson Foundation on Dine Alone Records, featuring a style quite unlike the caustic punk he's known for. It was followed up later this year by Through A Wall, a surprise new Single Mothers LP that features some of that band's hardest-hitting material to date. Writer Graham Isador met up with Drew in Toronto to discuss the dichotomy between the two projects.

This May musician Drew Thomson - best known as the frontman for post-hardcore act Single Mothers - put out the Stay EP under the name The Drew Thomson Foundation. Stay embraced Thomson’s pop sensibilities, while highlighting the literary quality of his lyrics. The record earned a lot of praise, with critics citing the four tracks as a welcome departure from the sing/shout vocals and brazen power chords Thomson cut his teeth in the punk scene. There were also favourable comparisons to Craig Finn of The Hold Steady, a frequent benchmark that’s been both a blessing and a curse for the singer-songwriter. Like Finn, Thomson draws inspiration from small-town malaise and misguided ambition. But where The Hold Steady frontman’s best work has always been rooted in character and story, the quality of Drew’s work has always felt more personal, as though he’s immersed in the experience and reporting directly from inside the shit. With Stay Thomson’s words are underscored with catchy guitar licks, even some high pitched backing vocals. It’s a winning formula, to the point where many people speculated what it meant for Single Mothers. The band has over a decade of experience and plenty of cred with the punk scene, but though its onset Thomson has been the only consistent member.

That’s why many people were so surprised when, without warning, Single Mother’s dropped their third album Through A Wall this September. Through A Wall is the band’s most aggressive record to date, it sounds more pissed off than reflectionary, with a lightning fast drumming and many tracks clocking in under two minutes.

Single Mothers are currently gearing up to tour Europe. Recently we had the opportunity to catch up with Drew to talk about - among other things - the decision to release his most punk and least punk albums in the same year.

Graham Isador: This is your latest EP under your own name. Before this, your band - Single Mothers - has gone through a dozen members and counting. Is it easier to work as a solo artist? Why do you think you’ve gone through so many collaborators?

Drew Thomson: With SM I tend to Stay out of the instrumentation and arrangement of the songs as much as possible. I’ve always tried to surround myself with musicians that I trust and who’s ideas I find exciting and enjoy collaborating with. I think, for that project - it keeps things fresh and interesting for me but also for people who listen to the band, so I’m constantly looking for new people to write with. I don’t think any SM release has ever had the exact same line up on a recording. With this new solo project, I’m writing the music in connection with the lyrics, although i still have a band I bring ideas to and we work on together. It’s not easier or harder it’s just different. I feel a bit more revealed in these songs, I can trace back the very beginning of each one to probably sitting on my couch in my underwear with a guitar strumming and humming away, whereas with SM it’s someone else sitting in their underwear on their couch, and then me adding lyrics later - generally.

Stay is different tonally from the post-hardcore we’re used to with Single Mothers. It draws on some of your pop/singer-songwriter influences while retaining the lyricism you’ve been known for. I know those sounds have always been inspiring to you, but what was the decision to embrace that style on the new EP?

I think those roots are just so embedded in me at this point so that when I pick up a guitar the songs just naturally flow out that way. I’ve never intended songs to be one thing or another I just like to write and play and not limit myself in any way. My writing process is pretty quick, I honestly feel the longer I spend on a song usually the worse it gets, so I let instincts take over and what comes out just comes out freely. With the solo project, I’m more in the front seat in regards to musical arrangements and tone, whereas in SM I like to just be in the car and see where it goes.

You’ve always been really aware of how fans and critics react to your work. Was there any worry in venturing away from a punk rock sound? Is it hard to Stay involved with those scenes as you get older?

I’ve never been worried about how my solo efforts are perceived outside of SM because they’re so different and who cares really. If as an artist or musician you second guess yourself on everything you do and get too worried about how people will like it you’ll never get anything done. The need to create and be creative outweighs the fear and anxiety releasing material creates. I love the punk and hardcore scene and I love playing that music live and will do so for as long as I can and that community is generally very accepting and kind. Everyone gets older, and new bands are popping up constantly and that’s exciting.

How do you think a twenty-year-old version of yourself would have reacted to this record?

Was there anything you were trying to say with The Drew Thomson Foundation that you couldn’t with Single Mothers? Is there a bigger theme that you’re hinting at?

It seems like you can go back to any point of time and people had said ‘the world is in a dark place right now’ but it just so happens that this is the time we are all alive and the world is in a dark place. For me personally, I’ve gone through a lot of changes over the last couple years, getting sober, losing loved ones…no changes that are exclusive to myself - and despite where we’re heading as a society, or whatever - I am personally in a better place and mindset than I’ve ever been. The EP to me is a balance of my personal change and the change going on around me.

Is the lyrical content autobiographical or fictional? Do you think it matters to the listeners?

It’s a bit of both, but - I don’t think what a song means to me should be imposed on a listener and interfere with how that person interacts with it or takes from it. I paint with broad strokes, I just want to invoke a feeling without digging too hard. What I wrote a certain song about to me can be very personal but that’s not necessarily what I’m trying to get across to a listener.

This interview has been edited for lengt
Graham Isador is a writer in Toronto. Find him on Twitter:@presgang