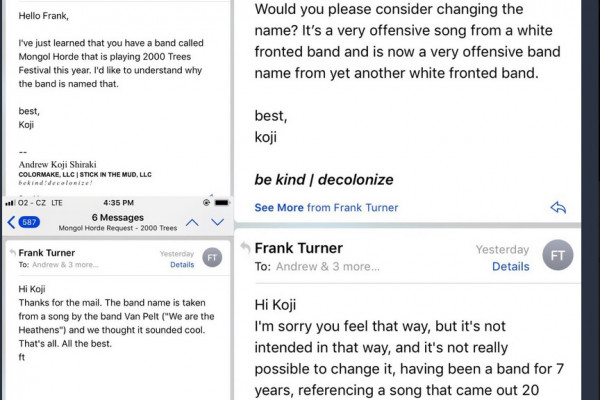 In a public twitter post, Koji stated that Mongol Horde, the hardcore band fronted by Frank Turner, has a name with racist implication. On the twitter post, Koji posted a picture of an e-mail to Turner. Koji's initial e-mail to Turner stated: "Hello Frank, I've just learned you have a band called Mongol Horde that is playing 2000 Trees Festival this year. I'd like to understand why the band is named that." Turner responded, Hi Koji, thanks for the mail. The band name is taken from a song by the band Van Pelt ("We are the Heathens") and we thought it sounded cool. That's all. All the best."

Koji then responded: "Would you please consider changing the name? It's a very offensive song from a white fronted band is now a very offensive band name from yet another white fronted band." Turner responded again, "I'm sorry you feel that way, but it's not intended in that way, and it's not really possible to change it, having been a band for 7 years, referencing a song that came out 20 years."

Following that interaction, Koji made the e-mails public on twitter and posted: "I’ve just learned that @frankturner has a band called Mongol Horde that is playing @2000trees. In my opinion, this is RACIST appropriation with an easy fix: change the name. When asked, Frank said, #ImSorryUFeelThatWay""

Tours: The Get Up Kids/ Muncie Girls (EU)