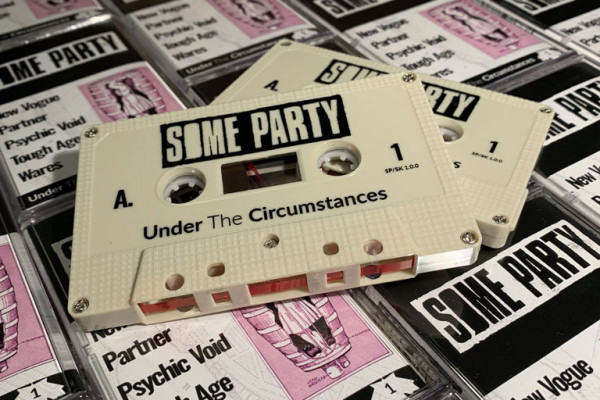 Some Party, the weekly Canadian music newsletter published by Adam White (who also happens to be Punknews' longest-serving volunteer), launched a new series of compilation tapes today titled Under The Circumstances. The first volume in the series is available now and features new or rare tracks from Toronto's Tough Age (covering Wire), Montreal's New Vogue (that's Max from PRIORS and Sonic Avenues), the Polaris Prize shortlisted New Brunswick born Partner, Edmonton's Wares, and Windsor's Psychic Void. You can snag a copy or learn more at someparty.ca or check out Adam's song-by-song breakdown below.

New Vogue is the wild new DEVO-core project from Max Desharnais of Montreal's PRIORS and Sonic Avenues. It's a robotic assault of spazzed-out new wave and cyborg post-punk. A future mutation of "Deny Me" is expected on the upcoming New Vogue full length, but you'll only hear this first incarnation on Under The Circumstances.

A few years back Tough Age pulled up stakes in Vancouver and relocated to Toronto, with guitarist Jarrett Samson and bassist Penny Clark reinventing their Mint Records garage-punk outfit as a trio with Calgary's Jesse Locke on drums. Shame, their first album of this new era, found the band delving headfirst into the Dunedin sound, geeking out over The Clean and that classic 80s Flying Nun roster. The Shame sessions also found the band warming with a few classic covers, notably "The 15th," originally from Wire's 1979 record 154. You're hearing it here for the first time ever.

It's been a few years since their Terminal Vacation tape kicked my ass, and I'm still singing the praises of Windsor's Psychic Void. The group marries the influence of 80s hardcore with tough-as-nails rustbelt protopunk. That's all given a spaced-out psych-rock flair thanks to Jesse Knight's reverb-drenched growl. "Boneshaker" is the band at their most aggressive, and one of the standout tracks from their brand new Vanilla Box LP Skeleton Paradise.

Landing in Windsor from their Sappy start in Sackville, New Brunswick, the righteously queer slacker rock act Partner are still riding high from their triumphant Polaris shortlisted You've Changed LP, In Search of Lost Time. "Lost My Pick, Can I Borrow One?" is a confection, a quip as an excuse for a bit of effortless guitar heroism from Lucy Niles and Josée Caron. It appears here on a physical release for the first time ever.

"City Kids" has been the rallying cry for Cassia Hardy's musical outlet Wares for years now, but you've never heard it like this. For this tape, the fuzzy Edmonton indie rockers turn the song indie out, crafting a gorgeous, undersea shoegaze take on their flagship tune. The band's follow-up to their self-titled 2017 LP is destined to arrive in early 2020, but you most certainly want to hear this wild reinvention of their past before then.

You can find further details and purchase links at someparty.ca. Adam's been a senior editor at Punknews.org since around 2001. He launched the weekly newsletter in May of 2017.

New Review Update: Check out the Staff and Editors' favorite records of 2019