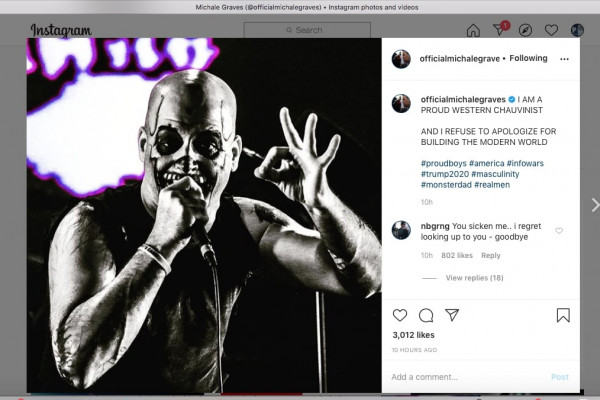 In the past, Michale Graves, singer for the '90s version of The Misfits, has made it clear that he is both a punk and a conservative. To that end, he even appeared on the Daily Show and spoke about his views. It appears that Graves is now moving farther to the right. Yesterday, on his twitter account, Graves stated (in all caps): "I AM A PROUD WESTERN CHAUVINIST AND I REFUSE TO APOLOGIZE FOR BUILDING THE MODERN WORLD." Included in the post was an image of Graves flashing the "OK" sign, which, in recent years, has come to be a symbol of various far right groups. Graves then followed the statement with a series of hashtags that appeared to assert that Graves is a "proud boy" and supports Trump as well as Inforwars.

In earlier posts, Graves appeared to show support for Mel Gibson and Alex Jones; he also posted a brief statement that appeared to talk about mass killings by Stalin while including a image of the Black Lives Matter movement. As you probably know, Graves left the Misfits in 2000 and has not been connected with the band since.

In 1994, R. J. Rummel's book Death by Government included about 110 million people, foreign and domestic, killed by communist democide from 1900 to 1987.In 1993, Rummel wrote: "Even if were we to have total access to all communist archives we still would not be able to calculate precisely how many the communists murdered. "

"for I have sworn upon the altar of God eternal hostility against every form of tyranny over the mind of man." ~Thomas Jefferson

The End of the Guided Tour...