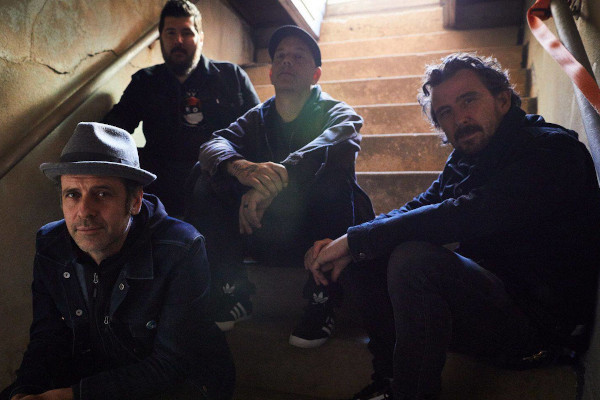 Bouncing Souls just released their new album, Volume 2 . The album finds the band reworking older tracks into a new context and a new tune. To that end, Punknews Gen handley spoke to the band's Greg Attonito about the release. You can check that out below.

My first taste of the Bouncing Souls came from my sister’s scratched-up The Good, the Bad, and the Argyle CD back in the early 90s when my musical tastes were really starting to develop. I vividly recall catchy punk-rock optimism thumping through the Sharp stereo’s speakers; optimism and positivity that wasn’t overtly preachy and contrived unlike some of their pop-punk contemporaries – an open attitude and philosophy that would make true believers of us all. Over more than 30 years, it’s been a pleasure to watch the band evolve, maintaining that signature optimism while writing better and better songs, performing more and more memorable shows. The latest phase in that evolution is Volume 2, 10 reimagined Souls songs from throughout their impressive discography, including a new track, the memorable “World On Fire.”

But before you start eye-rolling at yet another pandemic-exhausted band performing acoustic, stripped-down versions of their songs, it needs to be explained that these are new versions of classic songs, with new layers and textures, reimagined in ways you've never heard before – and if you're a true Souls fan, will undoubtedly appreciate and enjoy. These versions add new life to songs that were recorded as far back as 1996 like “Argyle” from Maniacal Laughter. This does not sound like a band stuck in a creative, pandemic-plagued rut. They sound reinvigorated and energized, making it crystal clear that they still love playing these songs as much as we love singing along to them.

Started before the pandemic hit, the production of Volume 2 was nail-biting with tracking being completed on the very first day quarantine began.

“That timing has special meaning for me because the album is literally the last minute of that lifestyle we had,” says vocalist Greg Attonito about the record, which started off as a list of about 25 songs according to the criteria that the band members love to play them live and that the songs had strong lyrics. (“Because maybe the lyrics weren’t highlighted in the original version.”)

The songs that made it onto the album were curated and chosen by pure spontaneity as well as a go-with-the-flow attitude from each of the five band members.

“We literally would walk into the studio and be like, ‘How about this one? What about that one? Let’s try “Kids and Heroes,”’ Attonito remembers fondly. “We would pick songs and see what we could do with them – there wasn’t really a plan. That was a lot of fun.”

“It was an amazing experience making this album, literally walking into the studio and not knowing what we were recording that day…just picking songs out of the air and committing to that,” he continues. “It was really satisfying.”

But it wasn’t completely chaotic. Producer Will Yip was in the studio to “usher us through those moments,” helping the band navigate their enduring and storied discography. Yip showed the band how to approach these established songs like demos, recording them with a fresh pair of ears.

“We were all just really open and Will gave us a lot of great feedback and ideas, helping us choose what went on this album – he had this super creative and positive vibe,” Attonito says. “I’m just grateful we finished this album before the world changed. Even though there aren’t live shows, I’m grateful that people will be able to hear this album and enjoy it wherever they may be and in whatever circumstances they’re in.”

It is evident on these songs that band truly enjoyed themselves, opening themselves up on classics like “Simple Man” (serious Cure vibes) or the classic “Hopeless Romantic” (drum track and keyboard).

“The songs already had a certain quality ingrained in them. For this album, we were able to dress them differently…actually, that’s sounds a little cheap,” he laughs. “We were able to present them differently, but they still are what they are. They’re still saying the same things but maybe with a slightly different mood and angle.”

Attonito says he really looks forward to playing these versions live, whenever that might be. When he talks about performing these renditions with their audience someday, there’s some sadness in his still youthful voice.

“It’s been a long six months and it’s been a bit emotional,” he says, “and I think it’s essentially because I’ve not been able to share music and play live music.”

“My nerve endings are just wired to play shows,” he adds laughing.