Check out the “Run 666” video from Toronto's Doghouse Rose 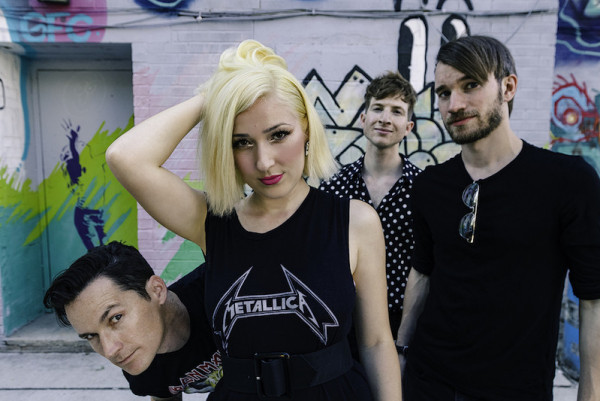 Montreal's Stomp Records are gearing up for a November 20th release of The Harder They Fall, the new full-length from Toronto's rockabilly-tinged punk quartet Doghouse Rose. We're thrilled to premiere the band's bombastic new video for "Run 666" today at Punknews! Check it out below, along with news of the band's part in Stomp's upcoming 25th anniversary party.

Vocalist Sarah Beth had this to say about the clip:

The song is pretty much about facing who you really are and figuring out what you need to do to be able to sleep at night. The idea behind the video is that we all kind of present as different versions of ourselves in public and how that version can skew the way you end up seeing yourself. Plus we thought a wall of TVs would look rad as hell. Setting up for the video was madness. We're at our core a very DIY band. We knew it would be impossible to find that many vintage TVs so we built them. The band spend two weeks building each one from scratch.

Doghouse Rose recorded with Steve Rizun (The Flatliners, Junior Battles) at Drive Studios. The new material follows up their 2019 EP The Blurst of Times. You can find more info on the release at Bandcamp.

Stomp Records has the unfortunate timing of celebrating its 25th anniversary this year. In place of a big cross-Canada tour, the label's organized a series of online performances featuring their entire active roster throughout the fall. Doghouse Rose will take part on Saturday, November 21, coinciding with their release weekend. You can find all the details on their show and how to grab tickets at Facebook.