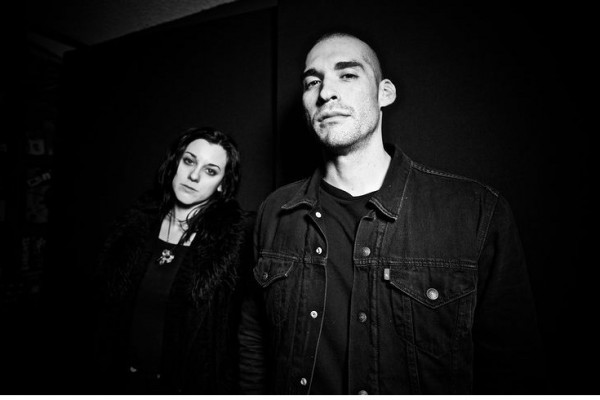 by John Gentile Interviews 11 weeks ago

Hunter Martinez, drummer for Decent Criminal and frequent Dwarves collaborator, has started a new project. The project is called Human Issue and it features Hunter and a revolving cast of compatriots. Influenced by 80s hardcore and deathrock, resulting in a sound that is dark and savage. Martinez created the tracks up by doing rough drum demos, and then building the song up with his long list of collaborators- and what a list!

The band is finishing up their debut release, an album called Faceless Nameless and it is dark, baby! To get a little bit more info, Punknews' John Gentile spoke to Hunter about the new project. You can read the interview below.

What was the genesis for the new band? Initially this started as a completely solo project. It’s honestly been my therapy for the past year. I needed to do something different for myself, to stay busy and to have an outlet to help me process things past and present.

I started writing a lot and playing guitar more than usual when the pandemic started. First it was just kind of random thoughts on paper and writing really short songs. I hadn’t written anything in years that really stuck, so I took it as a sign that maybe I should put these words to the riffs I was playing and made some demos.

I shared the demos with a few people and the positive feedback really cemented in my mind that this is something I should follow through with.

It’s very different from other things I’ve put out there or been a part of; “that’s you singing?!” Was everyone’s first reaction ha. I don’t think I even realized that I had that kind of power behind my voice.

I had toyed with the idea of making a more hardcore sounding project before but just hadn’t bit the bullet for whatever reason. The pandemic in some ways gifted me time that I otherwise wouldn’t have had to pour myself into this and also get other people on board.

The project is influenced by Rudimentary Peni… the best band ever? Why does Nick Blinko's music speak to you? Yeah! I mean, it’s influenced by quite a few different bands I’ve been listening to since I was a kid. But at the time I started writing these first couple songs, I was listening heavily to a couple different albums daily- my friend Crow Jane’s album “Mater Dolorosa”, Hey Chels’ “Everything Goes” & Peni’s “Death Church”.

I recorded a cover of the classic track “Inside” on a demo for fun and that kinda sparked a bit to write to what my short attention span could handle. I love short songs, the “get in and get out” type of writing. Blinko is a wordsmith and he gets right to the point, at least for that album. The shreeking voice, the short but brilliantly hard hitting songs, his lyrics are intelligent and just that the recording is so raw sounding.

I wanted to try to capture that kind of sound working with my friend/producer Raul Cuellar, but he definitely changed my mind a bit on how the overall sound of this project should be. He’d say, “dude it’s 2020 not 1982, you can’t duplicate that sort of thing now.“ Raul is a genius, so I completely trusted what he wanted to do as far as production goes and I’m really pleased with how it came out. It’s a balance, making something raw and rough but keeping the quality good.

What is it like playing with Rikk Agnew? There’s just some players that have their own sound, Rikk is one of ‘em. It was fun to just show him the songs in the studio and let him put his flavor on it. I didn’t have any idea what to do for most of the leads. he gave these songs a huge boost with his playing on them. Definitely made our jaws drop a bit when he started playing in the studio. Like “oh shit, there’s that sound”!

Why has Rikk been an important figure for you? The first time I heard the Adolescents and his first solo album “All By Myself”, it made me want to pick up a guitar. I wanted to play those songs, I wanted to play like him. Of course when I dug deeper I discovered all the other bands and albums he’s played on. I mean “Only Theatre of Pain”, such as classic. One of many. There’s just something about his playing that always caught my ear. At the time too, those albums was crucial in my life. They were the soundtrack to my teenage years. So, having the opportunity to work with Rikk truly meant a lot to me. I’m happy he was into the idea of rocking this project. Pretty cool to be playing guitar along with one of my favorite guitarists. Full circle type shit!

Both Rudi P and Rikk often dwell on death- is that something that concerns you? It’s been something I think about a lot. Especially as I’ve had a few near death experiences while on tour. Maybe there’s some kind of infatuation with the unknown? I think a lot of people have that but it’s kind of taboo to talk about. It doesn’t necessarily concern me, but there was a couple years where I felt like I was always in a rush. As if death was creeping in on me or something, so I had to do all I could while I’m alive and sometimes that can feel pretty heavy. I don’t know, I’m a tripper. A lot of this album “Faceless. Nameless” touches on that sort of subject.

What is it like being the drummer but also the driving force behind the band? I don’t mind at all being the driving force, I have a pretty good vision of what I want to do with this project and when I’m stoked on something it’s easy for me to really throw myself into every aspect. In terms of the music, I’d kinda like to leave things open to others involved to put their own spin on it too. For drums, it honestly makes it pretty easy in the studio. I can bust out drum parts because I have them in my head, I don’t need to try to explain what to do to anybody else behind the kit. When we start playing live, that’ll be kinda tricky. Singing and playing these kind of songs isn’t easy! I’m enjoying the song writing process more and more too, it’s kind of a challenge for myself.

What themes influenced the new album? My own life experiences that I haven’t really talked about before. Alcohol dependency, mental issues, therapy, anxiety, depression, past relationships, friends, feelings toward success, life, death and everything in between.

I took a lot of time to stop and reflect on everything that I’ve seen or done in the last decade or so. It’s been a constant - trying to just get by to be able to go on the next tour. That’s always been my main focus in my life, and in that I put a lot of my personal stuff aside - I didn’t care where I slept, what I ate, where I worked, It’s all just for the time being before I leave for the next tour.

When the pandemic hit, like most - my life turned flat. (But I’m very grateful I haven’t lost any love ones or gotten sick myself) I had to adjust and figure my shit out. Where to actually live, to have my own space, what I should and need to be doing for myself because the next tour isn’t coming. There’s a lot of that in my writing. It helps you realize that maybe you don’t have to be the martyr for music all the time and there is merit in taking care of yourself. If I’m in better shape, if I have my own space physically it can help mentally and all this can help me be a better musician and have more longevity because when you’re burnt out, you can’t give it your all.

How did you first get involved in punk? I grew up in a house of five kids. My older brother Dane was really big into punk music. I used to ride in my mom’s car to take Dane to school and on the way he’d play bands like Jughead’s Revenge, Ramones, Misfits, Guttermouth, Rancid, Vandals and Nofx. I remember when he moved out of the house, he gave me a bunch of his cds. I listened to everything he gave me and I was hooked. Luckily my parents were cool about taking me to shows when I was a kid. Pretty strange now to think about a six year old going to punk shows.

What was it like drumming for the Dwarves? It kinda feels like craziness follows the Dwarves. Always has. Hahah! I guess I saw a bit - Fights, drugs, being tear gassed by cops in the streets of Athens and coming close to death on a couple occasions. I guess that’s just how it goes? Wild kind of shit just happens on the road. But yeah, I was and am very grateful for the opportunity to play with those guys. I truly feel like I learned how to actually play drums when playing in the band, they taught me a lot. They write great songs and are such great players. There’s so many bands that are full of shit, like they are reading a teleprompter of cliches to keep it safe. Or trying to sell some kind of image.The Dwarves are who they are and don’t hold back. I’ll always respect and admire their integrity. I haven’t played with them for a couple years now, so I could focus on other projects. But, who knows I could jump behind the kit for em’ again at some point.

What can we expect next from Human Issue? Hopefully we can start playing shows soon! I’d like to bring this to a live setting and just keep going with writing and creating with different people.

You can check out the new band here.