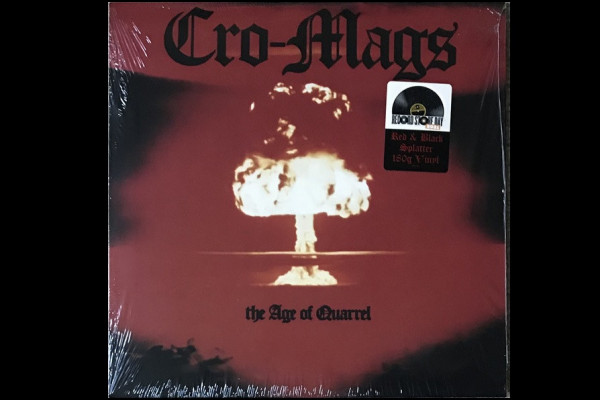 Surprisingly, seminal Cro-Mags album The Age of Quarrel [vinyl reissue] was slated to be released on the first Record Store Day of the year, which occurred last Saturday. This was surprising because ownership of the record has been in dispute since its original 1986 release on Profile/Rock Hotel. Various labels and Cro-Mags members Harley Flanagan, Parris Mayhew, and John Joseph have each claimed ownership of the record over the years (or have at least claimed a party releasing the record did not have the rights to do so).

Upon learning of the RSD reissue, Flanagan announced that he would challenge the release and try to stop its release. He also stated that he would try to regain control of the album as, according to Flanagan, none of the bandmembers that recorded the album ever received payment for it. Following Flanagan's statement, the record was taken off Record Store Day 2021 list. As one Punknews reader pointed out though, the record was taken off the RSD list just a few weeks before RSD, which implies that the records had already been pressed, suggesting that physical copies were being stored somewhere.

Despite the dispute, it appears that at least some copies of the disputed release have made it into the public as per pictures posted on discogs and social media. The pictures posted showed that the label that pressed the record was Profile/Rock Hotel. Both of those labels have been defunct for years, since Arista's late '90s acquisition of Profile. In 2004, Sony purchased Arista. Also of note is that the label bears the address 740 Broadway, New York, Ny, which is the old offices of Profile.

It is unclear if these copies were sold at record stores as part of RSD, or "fell off a truck" as it were. If you saw a record for sale at a RSD outlet, please e-mail podcast@punknews.org.

Meanwhile, Flanagan released a statement: "The Age of Quarrel that is coming out for record store day is not sanctioned by the band and none of the players who performed on the album have ever been paid, have never been accounted to for sales and were not approached for this release and will not be getting paid.

I understand that the fans want to own the album but just understand that the band members never got paid for this record and aren’t being paid now. We appreciate your love and your support and one day I hope to sort all of this out and if and when we do you will all be the first to know about it.