The Black Halos return with “Uncommonwealth” 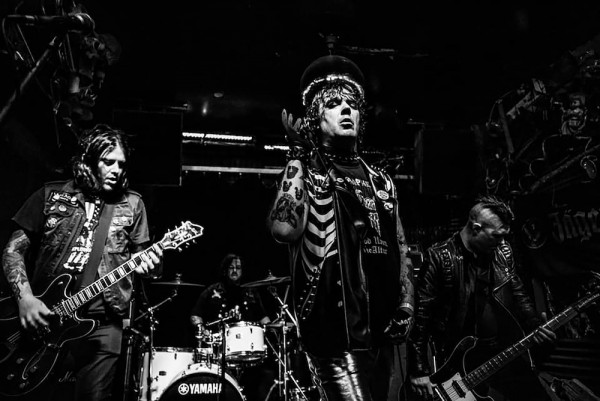 by Adam White Music 48 weeks ago

Vancouver glam-punk survivors The Black Halos return this summer with a new EP for Toronto's Cursed Blessings Records. We're thrilled today to help debut the title track, "Uncommonwealth." It's one of three new recordings collected on the set, including another new original dubbed "Fossil Fuel" and a cover of "Shoot You Down" by the 90s British punk act Birdland. Click below to stream the "Uncommonwealth," read a few words from frontman Billy Hopeless, and get up to speed on this latest stage in Halos tumultuous history.

Frontman Billy Hopeless had this to say about the new set:

"….What can you do when life gives you lemons you ask ? Well squirt the juice in its eyes I reply, and that's exactly what we're doing with this new 3 song EP! Just take the lyrics "It's the punchline line of the century that Brian Jones sunk like a stone" from the song Fossil Fuel and the line "So this is what it looks like under the bus!" from the title track "Uncommon Wealth." We're not talking ballads here kids. Finishing it off we got a cover of the song Shoot You Down by the British gem of the delete bin band, Birdland, that we fell in love with and used to jam in the early years. We Hope these three offerings will keep you burning until the upcoming, soon to be announced, full length…"

The new EP launches the third era of The Black Halos, with the band having split and reunited twice before. The group features currently vocalist Billy Hopeless and veteran guitarists Rich Jones and Jay Millette --- now joined by bassist Josh Kerns (The Age Of Electric) and drummer Danni Action (Midnight Towers). The new EP, not to mention their upcoming full-length, serves as the band's first long(er) form release since 2008's We Are Not Alone. In the past couple years the Black Halos released two singles through Yeah Right - 2019's Geisterbahn II / Tandem Drown and 2020's …Ain't No Good Time To Say Goodbye. The latter was a tribute to the late Mr. Chi Pig of SNFU.

The band recorded (at a distance - pandemic style) with Sean Pearson of Hamilton, Ontario's Boxcar Studios. Rich Jones tracked some additional material at home and with Eric Breitenbach at The Spot in Vancouver. Both Jones and Action mixed the new set. Look for it on Cursed Blessings in July, and check back soon for word on the band's long-awaited new full-length.