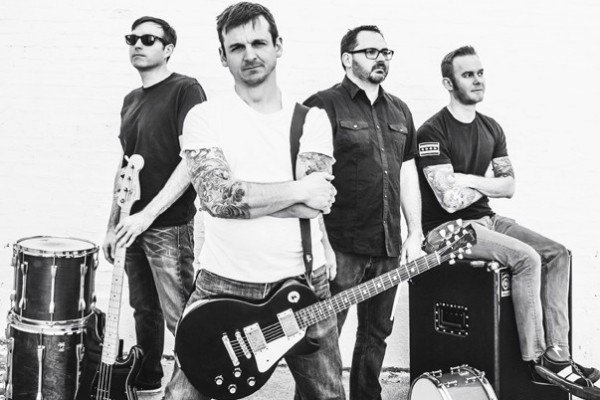 by John Gentile Interviews 11 weeks ago

Dan Vapid is certainly no stranger to the world of punk rock. He has served time in many of your favorite bands such as Screeching Weasel and the Queers. On his own, he founded the amazing Sludgeworth, Methadones and the Cheats. Dan is an accomplished musician and songwriter. On November 5th, Dan Vapid and the Cheats will be releasing their 4th proper full length, entitled Escape Velocity. Punknews' Jason Baygood had the opportunity to chat with Dan recently about topics such as his career, today’s music scene and the new album.

Thank you for taking the time to do this interview? How have you been? Good. I’m living in a small town in southern Illinois, married, father of three, work at the post office. I just miss playing music regularly.

What have you been doing to keep yourself busy during this offtime from playing shows? My wife and I have an unfinished basement in our house. Starting in January 2021 we put up framing, dry wall, made a music room, set down flooring, bathroom, made a bar and fireplace. Its now getting finished and turned out great. My wife and her family are skilled builders and I learned a lot by working with them. Other than that, I took a few online world history courses. I cook and write songs often.

Turning to music, many bands, labels and festivals have resorted to livestreams as a means to perform for the fans due to the absence of live shows. I know you have participated in a few, such as the Lookout Zoomout and the T1 Festival. How were those experiences for you? Do you enjoy the streaming format for live performances? Would you consider continuing online performances even once live shows return in full force? I would consider it if need be. It was pretty interesting how a pandemic shut down music venues but alternatives to express music and or ideas took form with livestreams.. If there’s a will there’s a way.

Let's talk about the new album for a bit. Escape Velocity is due out November 5th on Eccentric Pop Records. I read that writing and pre-production commenced actually pre-pandemic. How has the state of the world impacted your ability to work with the band on completing the album? The pandemic put the project at a halt for a year. I went an entire year without seeing any friends or bandmates. Needless to say. It sucked. When vaccines were rolled out we continued our recording session. Our bass player, Dillon, then caught the delta variant after vaccination. He had to isolate for two weeks which set the session back again but we reconvened. Good news was Dillon’s symptoms weren’t too bad.

Glad to hear Dillon is doing welI. have noticed a couple recurring themes throughout the album. As the title suggests, much of the lyrics definitely deal with escaping. Songs like "Burning Questions" and "Runaway Jane" tell the tale of getting out of a bad relationship and situation. Are these songs fiction or do they reflect real life scenarios of yourself or someone you know? They are inspired from John Updikes novel “Rabbit, run” and are all works of fiction. The record revolves around the point of view of a husband, wife, and third party convincing the woman (Runaway Jane) to leave her marriage.

I could not help but think of you Dan upon hearing "Middle America" for the first time. There is much passion in your voice when delivering the vocals about moving away from the big city. Is this song about you leaving Chicagoland? No, it’s just part of the fictional narrative of the record. I based it on small towns near to where I live.

The second topic I found in a number of songs centers around technology. "Cyber World" speaks of making connections with someone online and the blurring of lines between the virtual and real world. "Robots" speaks of the concern of technology replacing all our jobs through automation. What does modernization and technology mean to you? Do you see both good and evil with it? I do. Technology can be a great tool but is too often used for nefarious purposes. We see this online everyday, As long as there are damaged individuals behaving like narcissistic assholes, which undoubtedly there will be, the capacity to use technology to create drama or damage will be right there at their fingertips. Of course, this is nothing new. As long as companies operate with the belief of placing profit over people, technology will be used to maximize profit at the expense of a human being.

Next I would like to talk about the album musically. This album is yet another progression in your career. Many elements of the past are there, but this is no nostalgia trip. To me, this is a very songwriter album. The lyrics are at the forefront in the mix. Was this intentional? I think so. I tend to spend more time writing lyrics than I did in past projects. I try to be as clear and concise as possible. The older I get the more I appreciate great lyricists. I’m still addicted to hooks and melody though, that will never change.

I would like to shift gears to your musical career for a moment. Growing up in the same area as yourself, I have been fortunate to witness your career first hand, dating back to when I first heard Generation Waste. Progression has always been present across your timeline. From the hardcore roots of Generation Waste and early Screeching Weasel, to the extremely contemporary Sludgeworth, to the second wave of Screeching Weasel and the rise of Ramonescore, through to adopting your true sound with the Methadones , Noise By Numbers and the Cheats. Was this growth intentional? Do you go into songwriting with a plan to grow and expand or has this come naturally? Please feel free to expand on any one aspect of your career. It might be intentional in some regards but it’s also a natural progression. I’ve continued to enjoy the music of my youth but tastes have also changed a little over the years. I listen to all kinds of stuff now.

Are there any previous bands or projects you were involved with where you feel there is any unfinished business? Either from a recording or performing standpoint? Do you have any regrets in terms of the ending of any band? No unfinished business. Some bands just ran their course, and when that time is up, it’s time to fold.

There is no doubt that punk rock and especially pop punk is becoming in fashion again. Many labels old and new are churning out some great new releases. What are your thoughts on how bands operate these days? Obviously much has changed since the days of turning in your band's boombox recorded demo tape to a promoter or label. Do you feel that bands these days sometimes miss those rights of passage such as in person promoting and handing out flyers? Nowadays it seems like a band can get signed based on internet hype and not even having one performance. To me, this comes down to technology again. It’s beneficial in many ways but the world is just flooded with bands now. It can be hard to navigate at times. Music has also become more and more disposable. I don’t like that part.

Are there any newer bands you have been listening to recently? Which bands have been impressing you the most? Depends how you define new. But…the Menzingers, the Beths, Bleached. To name a few.

Let's get back to the Cheats. Now that the album is about to drop, are there any current plans for live performances or touring? Any plans in the pipeline for future recordings? Future recordings for sure. I’ve already gone back into the studio. I have tons of songs. I hope to start playing again. I have three children under 12 that are not vaccinated. I’d like to not bring Covid home to them. So, we’ll see. I am itching to get out though.

Thanks for taking the time for this interview. Looking forward to the release of the album as well as any future recordings.