Hey Western Canada! Win tickets to Punk In Drublic in Edmonton and Abbotsford 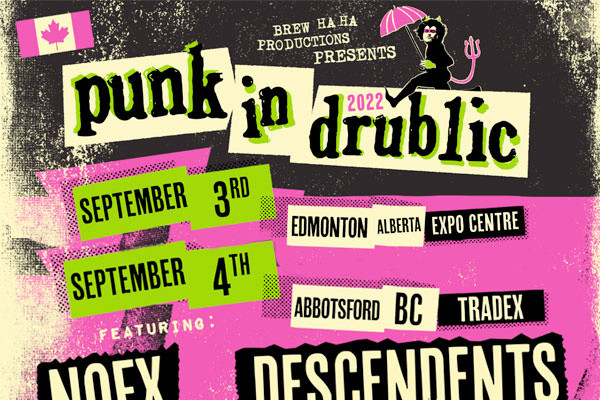 by Adam White Contests 5 weeks ago

Punk In Drublic came back swinging this year, taking the hybrid punk rock festival and craft beer expo on the road in Europe and the US. Earlier this summer, we even had word that organizers Fat Mike and Cameron Collins had Western Canada in their bleary-eyed sights! Here at Punknews we love a good party, and given the geography in question we dialled up our Canuck-focused offshoot Some Party to jointly offer a pair of free tickets for both the Edmonton and Abbotsford shows. Each date features headliners NOFX, Descendents, PUP, Strung Out, and Voodoo Glow Skulls - with some local flavour kicking things off. Edmonton (September 3) includes an appearance by veteran Alberta pop-punkers Chixdiggit! and new upstarts Real Sickies, while Abbotsford (September 4) ropes in the BC hardcore/punk acts Modern Terror and Rest Easy! You can click below for more details, or cut to the chase and enter now!

What you need to know

On Saturday, September 3rd, the event takes over the Expo Centre in Edmonton, Alberta - featuring headliners NOFX, Descendents, Pup, Strung Out, and Voodoo Glow Skulls with Chixdiggit! and Real Sickies. Sunday, September 4th, sees the circus arrive in Abbotsford, British Columbia at TRADEX, again featuring a top-line bill of NOFX, Descendents, PUP, String Out, and the Glow Skulls, but this time joined by Modern Terror and Rest Easy. Both days start off with afternoon craft beer tastings showcasing a huge selection of regional brews - you can see the complete list of participating breweries below.

Doors for each event open at 1:00 PM for general admission, or noon if you're springing for VIP tickets. The craft festival runs until 3:00 PM, with the music kicking off afterwards (don't worry, the bar stays open). Given the nature of this event, both dates are 18+.

On that notes: You also must be 18+ to enter this contest. Please enter only once per person, but you're free to enter once per city, if you'd like. Event promoters F7 Entertainment will draw winners and reach out with all necessary details upon contest close.

Photos: BODEGA / Sham Family at The Garrison in Toronto, ON 08/22

Photos: Crawlers: "I Don't Want It"