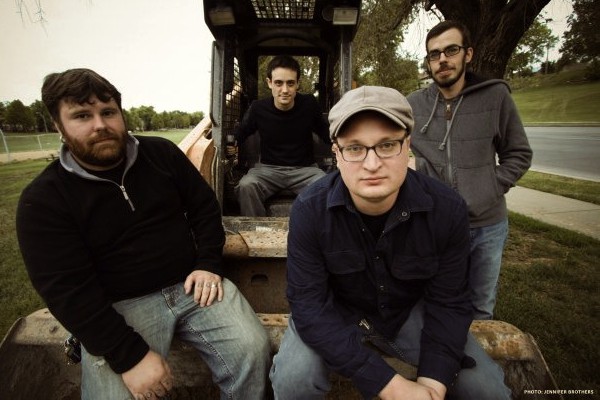 Photo: Jennifer Brothers
The band's inception was in January of 1994, consisting of Jes Steineger (guitar), Stacy Hilt (bass) and Jim Redd (drums). During this time they were using the name Breach, and around Easter of '94, Sean Ingram joined the band to fill the vocal position, and the four members opted to use the name Coalesce, to avoid confusion with a Sweden–based band.

With the name issues amended, Coalesce entered West End Studios to record a demo. This work was pressed to a 7" EP that sold out rapidly.

The UK division of Earache Records was impressed by the unique and innovative sound featured on Coalesce's demo so they invited the band to record an EP for Earache's 7" series imprint, New Chapter. The EP, simply entitled 002, was recorded in one day and released in 1995. "002" marked the beginning of Coalesce's relationship with Red House Studios and producer Ed Rose, who would go on to produce all of Coalesce's following material!

To promote 002, Coalesce embarked on their first US tour, which lasted 6 weeks, in the summer of '95. They supported the bands Bloodlet and 108. This tour served as the catalyst of Coalesce's first break–up, as the clashing of personalities had amplified between vocalist Sean Ingram and drummer Jim Redd while on the road. Once Coalesce returned home from the road, Jim convinced the other bandmates to oust Ingram from the band. Sean showed up at band practice to find future Coalesce drummer James DeWees' undergoing his vocal replacement audition. Sean engaged in a confrontation with drummer Jim, resulting in Coalesce disbanding altogether in early 1996.

In the summer of 1996, guitarist Jes Steineger contacted Sean and the two decided to reform the band. Stacy Hilt was included in the reunion, resuming his bass duties, and the drum position was delegated to James DeWees, the same person who had attempted to secure the available vocalist position before Coalesce had broken up (original drummer Jim Redd decided not to pick up the drum sticks again because he was attending school in Baltimore). This incarnation of the band dusted off some older material and revised it so they could release it on the records A Safe Place 7" (Edison Recordings) and the Earache–distributed split EP with grind veterans Napalm Death, entitled In Tongues We Speak. This split was perceived as 'groundbreaking' within the hardcore punk/metalcore community due to the odd pairing of bands, which was beneficial in the sense that the fans of the respective bands would get exposed to two styles of heavy metal that they had never been privy to before. These releases also showcased a marked shift in Sean Ingram's vocal style from a full–voiced shout (typically punctuated by spoken verses) to a much deeper, guttural "bark." This, paired with the group's increasingly complex arrangements, became Coalesce's signature sound.

In 1997, Coalesce wrote and recorded their first full length, entitled Give Them Rope (released on Edison Recordings), as well as songs for several compilations and split 7" records with The Get Up Kids, Today is the Day, and Converge on the other side of the vinyl.

After weeks of playing the new songs on tour, Coalesce entered Red House Studios in the spring of 1998 to record the album Functioning on Impatience in a mere 3 days. Quickly following this, Coalesce recorded songs for a split 7" with Boy Sets Fire. Both the full–length and the split record were released that summer. It was during this period that bassist Stacy Hilt made his departure and was summarily replaced by Nathan Ellis, who was by trade a guitar player, but opted to switch instruments in order to join one of his favorite bands.

Coalesce once again entered Red House to record the album There is Nothing New Under the Sun, a one–off release on Hydra Head that comprised Led Zeppelin covers, which was released in the autumn of '98. Coalesce attempted a US tour in support of this record, and did manage to play the east coast dates with Neurosis, Nile and the Dillinger Escape Plan, but the tour ended abruptly as unresolvable problems with their touring van brought tensions to a head and rendered Coalesce unable to complete the tour in the winter of '98. They discarded the van, returned home in a U–Haul and subsequently disbanded once more.

The members recorded their final album, 012:Revolution in Just Listening, in separate sessions from each other. It should be noted that during Revolution's recording process, certain band members of Coalesce were working with other bands: bassist Nathan Ellis started The Casket Lottery with former Coalesce bassist Stacy Hilt, and drummer James DeWees joined The Get Up Kids as their keyboard player and also started his "solo" project Reggie and the Full Effect.

A lineup impervious to breaking up was something that would always elude Coalesce. The usual cause for a Coalesce breakup was either standard inhouse feuding between band members, lack of money, or intermittent bouts of leaving and rejoining Coalesce due to religious reasons. Coalesce reformed in 2002 sans Jes Steineger, replacing him with The Esoteric guitarist, Cory White, for a national tour and short recordings.

Coalesce was slated to play in Hellfest in 2005 with original guitarist Jes Steineger and new drumming addition Nathan Richardson, but a legal maelstrom against the festival's organizers prevented the festival from taking place. Since they had already made the travel arrangements, Coalesce booked and played 2 shows at small venues instead. One was in Philadelphia and the other in the Wilkes–Barre area.

The band played what they advertised as their 'final show' in Lawrence, Kansas in September of 2005. During the Philadelphia and Lawrence reunion shows lead singer Sean Ingram announced that the band was going to begin writing new music but under a new moniker. However due to work and family this idea was abandoned.

On January 3, 2007 lead singer Sean Ingram announced on his personal blog website that Coalesce had recorded 2 new songs on December 28th and 29th at Black Lodge Studios. The songs would be on an upcoming final 7" to be self released by the band along with a DVD and book sometime in 2007.

On February 9, 2007 Coalesce announced, via MySpace, that they intend to do some touring in August 2007. Possible areas include Europe, Japan and the United States (East Coast).

On March 21, 2007 Ingram announced on the Coalesce website that the release will be titled Salt and Passage. The tracks will be titled Son of Son of Man and I am This. It was also said that re–recording of the singing tracks for There is Nothing New Under the Sun were completed for the re–release through Hydra Head.

On May 26, 2007 on the official website announcements were made in regards to the upcoming 7" and DVD. Instead of releasing them together they will be released separately. The 7" to be released in a hand screened gatefold cover with limited different colors on September 11, 2007. The DVD will be a collection of as many complete shows that they could get and it is entitled No Business in this Business. The DVD is scheduled to be released in late August to early September.

Give Them Rope She Said v2.0

Reggie and The Full Effect

James Dewees (Reggie and the Full Effect, The Get Up Kids, Coalesce)