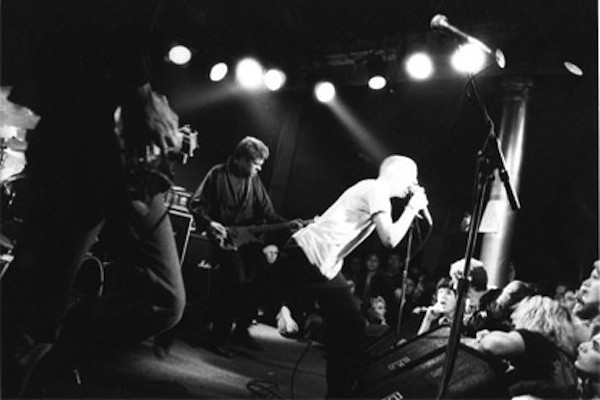 Photo: Jane Bogart
Embrace was a short–lived post–hardcore band from Washington, D.C., often cited as pioneering the Emotionally charged hardcore punk (Emo) movement, from the summer of 1985 to the spring of 1986. The group was primarily noteworthy because of its well–known members, joining Ian MacKaye of Minor Threat and The Teen Idles with guitarist Michael Hampton, drummer Ivor Hanson, and bassist Chris Bald, all former members of the pioneering band Faith. Hampton had also played in S.O.A. with Henry Garfield (later known as Henry Rollins). All four members had been involved in popular and influential bands in the nascent D.C. punk scene since the late 1970s. The only album released by the quartet was their self–titled album Embrace.

For hardcore icon MacKaye, Embrace represented a transitional project between the short and fast sound of his youth and the later melodic tones of his current work (after his often maligned Egg Hunt project with Dischord Records cofounder Jeff Nelson, and the Ministry crossover Pailhead). MacKaye eventually teamed up with former members of Rites of Spring to form the long–running punk outfit Fugazi, while Hampton earlier played with Fugaziâs Guy Picciotto, as well as Embraceâs co–producer Edward Janney, in One Last Wish. Bald moved on to the band Ignition, and drummer Ivor Hanson paired up with Hampton again in 1992 for Manifesto.

Nerf Herder's Parry Gripp on how to embrace your inner nerd