Photo: Shawn Brackbill
King of Jeans. The title of Pissed Jeansâ third album and second for Sub Pop conjures their essence perfectly––masters of the mundane, beasts of the banal, high priests of the humdrum. These four, white, male high school graduates hardly look further than their own appendages for artistic inspiration, content to execute their own brand of brash and heavy punk music in the Joe Carducci–approved standard rock formation of guitar, bass, drums and vocals. From simple minds and simple fabrics comes this King of Jeans, perhaps also a slight nod to the variety of Pissed Jeans–inspired groups that have crawled up since 2007âs Hope for Men. After all, there can be only one.

If 2005âs Shallow was Pissed Jeans coping with moving out of their parentsâ homes, and 2007âs Hope for Men their initial reaction to the mechanical lifestyle of a wage–earner, King of Jeans is their formal and uneasy acceptance of adulthood. The age gap between the members of Pissed Jeans and high school girls is no longer something to be overlooked––they hoped for men, and sometimes you get what you wish for. Backs get sore easier and stay sore longer, record collections have reached their breaking point or have been sold entirely, and procreating is becoming a more pressing issue. What are you supposed to do when you are unable to break out of the standard, middle–class American life cycle that you never really wanted but donât have the energy to subvert– When you are forced to understand that itâs all madness but know fully well that someone will have to take care of our aging parents– Well, Pissed Jeans went ahead and made one hell of a rock record. Working with renowned producer Alex Newport (who holds a Fudge Tunnel pedigree and has worked with such luminaries as At the Drive–In, The Locust and Sepultura), Pissed Jeans have pushed further into the raw, minimal core of heavy rock music with King of Jeans.

Less frequent are the extended noise passages that made Hope for Men so frightening, replaced with a buffet of riffs capable of feeding Tad for a month. Opener âFalse Jesii Part 2â (feel free to Google part 1) is classic Pissed Jeans with its circular, fuzz–soaked riff, pounding rhythm section and unwound vocals, a call to arms against the social lifestyle while admitting that yeah, they could still partake if they wanted. âHalf Idiotâ calls to mind vintage Birthday Party with its rumbling groove and splayed guitar. âDream Smotherer,â âLip Ringâ and âDominate Yourselfâ carry the same massive weight found in previous cuts like âSecret Admirerâ and âIâm Sick,â pummeling the listener at a variety of speeds while tackling such issues as office life and the unrequited love of women steeped in ostensibly dumber subcultures. And then thereâs the Sabbath–built self–defeat of âSpentâ and simple plea of âRequest for Masseuse,â played as if the loving hands of Blue Cheerâs Randy Holden were guiding the session. And this is coming from a band who, while writing this record, spent more time with the first three Danzig albums than most Fiend Club members.

Itâs also worth noting that this is the first record that bassist Randy Huth has played on, he of both Drag City recording artists Pearls & Brass and Randall of Nazareth. A close friend of guitarist Bradley Fry and singer Matt Korvette since high school, his full–time Jeans status has helped to complete Pissed Jeansâ take on the cumulative efforts of all heavy guitar–based music of the past four decades. Drummer Sean McGuinness appreciates the random packets of opium he shares at band practice, too.

So here it is: King of Jeans. Expect to see these Jeans on the road for a good part of 2009 and 2010, as previous shows have paired them with acts as oddly fitting as Om, Black Dice, Flipper, Boris, Harvey Milk, Mudhoney, and hell, they even played with Sage Francis once. When that long hairy arm starts for your face, I recommend you take a good bite. 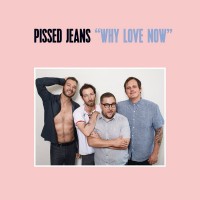 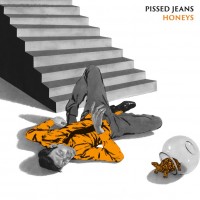