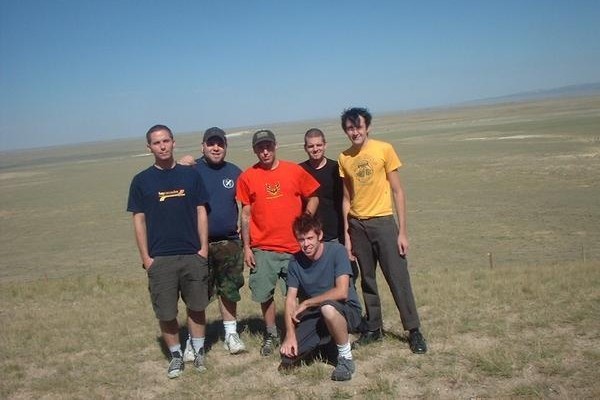 Teddy Duchamp's Army Started in the basement of a house shared by founding members Mike Rock, Jason Jouver (Creta Bourzia, Don Caballero, Jumbo, Liquid Brick) and Steve McMillen (Paris Green, Sub Rosa, Irwin, Shylock, Sullenspire, Voice In The Wire). One day while messing on the instruments from Jason and Steve's other bands they started to mess with a few songs Mike had written on his own. While all of his friends were busy in bands, Mike was always the guy selling the t–shirts and records, or designing flyers or helping book tours, but had always wanted a band of his own.

Mike had a close friend that played guitar in several local bands, that had always encouraged Mike to play in a band of his own, but he always had cold feet, somewhat intimidated by the talent of his friends. 1998 that friend passed away very unexpectedly. Realizing life was short and he had to make things happen for himself, Mike made himself a promise. Before the year ended he would play a show with a real band.

As the year's end drew closer, Mike once again went back to the basement with Jason on vocals and Steve on guitar, and added close friends Todd Ladner (Liquid Brick, Creation is Crucifixtion, Shale) on bass and Brian Garbark (Toothagunna, Jumbo, Bunjie Jambo) on Drums.

The band played a handful of Mike's songs just before midnight on new years eve 1998.

The band's melodic punk rock was a breath of fresh air from the technical, heavy mathrock bands most of the guys had been playing in. Everyone had a great time and decided to continue to play some more shows. In the summer of 1999 the band recorded a demo with long time friend Andy Wright (Anti–Flag, Human Investment, Wesafari, Disco Crisis) at the control board. They recorded 7 original songs and a cover of local legends Half Life's "Go Down Fighting"

Shortly after Jason decided he was much too busy with Creta Bourzia and starting his own recording career so he stepped down. The band decided to ask good friend Keith Smallwood (Jumbo, Crippled Susan) to sing for them, and within days of hearing the news, and having fallen in love with the songs during the recording, Andy Wright asked if he could take over vocal duties. Faced with two potential and very different vocalists the band decided to try something different, two singers! The band played several shows like this and decided it was time to become more serious. It was time to release something and start touring. Keith decided to step down due to a conflict with being on the road alot. Local label Hope Records stepped up and offered to do the release for the Army. So the band moved forward with just Andy on the mic and started recording songs.

The recording was done by Andy in his broken down warehouse space in the dead of winter in subzero temperatures. The rooms were extrememly cold and the guitars were having trouble staying in tune and the guys were having trouble keeping their fingers from freezing. The recording process was very grueling and tempers flared a few times. Andy being the engineer had some sound ideas that some of the other guys didint neccesarily agree with. With a tour already being booked there was no time to rerecord so the band released 6 of 13 songs being recorded.

The band did two fairly succesful DIY tours on the Hope records release. During that time, the space between Andy and the rest of the band was growing. After their first full U.S. Tour the band decided to part way swith Andy.

After trying out a few prospective people, the band welcomed former No on 15 drummer Zack Furness as its new vocalist. First chance they got the band hit the road again. During these next few tours the band met Alex Saavedra, owner of NJ indie label Eyeball Records (Thursday, My Chemical Romance, Murder By Death). After spending a few off days at the Eyeball headquarters the band and Saavedra formed a lasting friendship based on similar music tastes and punkrock childhood experiences. By the end of the visit, both Saavedra and the Army decided they wanted to do a record together.

When returning home from the tour original bass player Todd Ladner decided to move on with his home life and stay off the road. Jake Reinhart originally a guitar player and old friend was asked to pick the bass and join the band. With the plans to record their first full length for Eyeball set in stone the band worked on new material for the record. Meer weeks before the band was to enter the studio, drummer Brian Garbark decided to leave the band and focus on school.

The band was shocked. The two remaining original memebers, Rock and McMillen realized after several lineup changes the band was no longer what it started out to be, and decided they were no longer Teddy Duchamp's Army. They played their last two shows with friend Jeff Kopanic (Tabula Rasa) filling in on drums. The practices leading up to these shows layed the ground work for what was to become VOICE IN THE WIRE. VITW went on to record the full length "Signals In Transmission" for Eyeball Records and has toured the country extensively.

Voice In The Wire