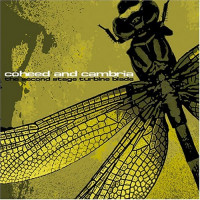 Enrolled in a computer keyboarding class my freshman year, I met a young man with greasy black hair, heavy material work pants that just barely reached the top of his ankle and t-shirts that fastened to his ribs, revealing his awkwardly thin body.

Behold the indie-rock weasel. Clutching his Drive Like Jehu 7"s and desperately grasping for his messenger bag violated with Crimson Curse and Locust patches, he showed me the emo ropes. Thankful as I was, I was quite aware I had arrived at the funeral procession of emo. How my indie St. Nick would tell me tales of The Get Up Kids and Karate in the same basement as I salivated!

This past year it has become overly evident that we have become so pretentious we don't even know what we mean anymore. I know Chris Carraba and Jim Adkins have to eat too and integrity buys a musician nights in thankless clubs and sleep on stranger's floors, I can't help but lament my tardiness to this once vibrant genre.

Enter Coheed and Cambria and thier record second stage turbine blade that has the power to warm the most hardcore of hearts and crack smiles on the faces that have seen tragedy after tragedy.

The sheer melody and songmanship of frontman Claudio Sanchez is breathtaking while the high-hat intricacies flirt in the background as angular and brutal guitars spit back and forth at one another. The production is near flawless as creepy organ intros frequent the record and the gritty guitars are mixed guitars to indie perfection, deliciously complimenting Sanchez's choir-boy-jealous tenor which records crystal clear.

In fact, not enough can be said about Sanchez's voice. His range is impressive and discretion in diction is enough to make one shout, "Oh snap!" Whether it is a throaty scream or a delicately placed emotive yelp, the vocal delivery urges one to extend the the forefinger and shove it into the air, shaking it rhythmically.

So remove The Black Rebel Motorcycle Club and Spiritualized and let Co&Ca remind you what it feels like to enjoy what you're listening to.

Coheed & Cambria don't have the goods to breathe life back into cr*EMO* of wheat, but for those who attend the summer funeral, they will give a fine oration full of "awwwww..." inspiring lyrics and sing-a-long indie rock.