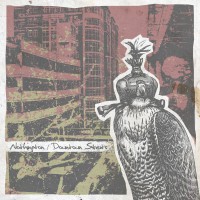 I've always liked splits. Sometimes you listen to one because of a band you like and you end up discovering a new band; sometimes bands get to do something fun with it. In this case, Nothington and the Downtown Struts each offer up a new composition and a cover song (it should be noted that The Downtown Struts' cover tune only appears on the digital version, despite being listed on the back sleeve of the 7-inch).

Unfortunately, the covers lack any sort of originality. It's not that they're bad, they don't really bring anything new to the table. Nothington's cover of Nirvana's "Territorial Pissings" sounds very much like the original, down to the tone of the guitar during the solo. But still, it's fun to hear Chris Matulich handling the verse duties and Jay Northington's trademark on the chorus. The Downtown Struts take on the Joy Division/New Order song "Ceremony" and while good, it sounds very much like New Order's version. It's almost a little more interesting to listen to the differences between the few existing Joy Division versions and the New Order version.

But the cover songs are just the supporting players. The real stars of this show are the bands' original songs, and that's where this record earns its four star rating.

As a band with two lead singers, Nothington have a great dynamic going. Rather than trading off lead vocal duties on tracks, Northington and Matulich trade off lines within the verse. It's something they've been doing more of lately and their voices complement each other well. "Solid Ground" is as catchy as anything they've ever done and is proof that there's no sign of this band slowing down.

The biggest gem on the split is the Downtown Struts' "Childhood." The progression of their sound from Sail The Seas Dry to this point has been a slow, natural shift into more carefully crafted songs with incredibly personal lyrics. This is a band that gets me more and more excited with each release. The tune starts out with a blast of energy and shifts into a melancholy verse that builds to a chorus so uplifting and catchy that it sticks with the listener.

Asian Man has put out a solid release definitely worth picking up (or buying digitally, as I'm pretty sure the physical copies are sold out â and unfortunately, it's a one-time pressing). The strength of the two original songs has me really looking forward to what both of these bands have in store for the future.