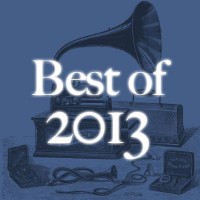 [Adam White is the Managing Editor of Punknews.org]

Year one of Adam: Punk Rock Dad has been pretty awesome if you ignore my utter failure at the punk rock part. Punknews has been an amazing, life-defining hobby for me, but despite my best intentions, the dual time crunch of the first year with my daughter and running a business to pay for said child has put the Org on the backburner. A reasonable person would look at the past decade (plus), declare "good run," and bow out. Let it never be said that I'm all that reasonable.

Thankfully we've had some amazing people volunteering their spare time and energy to help us do whatever it is we do. Bryne, Kira, Brittany, Andy, Brit, Nariman, Adam, and the Johns, this wouldn't exist without you.

Thanks to all of you for visiting the site, reading our silly stories, listening to our dumb podcasts, and leaving your ever insightful feedback. Maybe next year I'll learn how to manage my time and actually justify how farcically high my name sits on our masthead.

3 EPs that demonstrate my unfair bias for Ontario bands

This is the second set of distortion washed shoegazey dream-pop from Spiral Beach's Daniel Benjamin and Maddy Wilde, and it's as mesmerizing as the first.

Vital, aggressive, mathy post-hardcore. The B-side of this three song set picks up the Drive Like Jehu gauntlet and beats you to death with it.

This is so much fun. Wry, sarcastic Toronto punk rock that's worlds ahead of the band's last full length. They crushed through this during their set on the Punknews.org stage at S.C.E.N.E. this year too. Bonus points? Bonus points.

As a band who once held a certain air of mystique, the Bronx shouldn't wear "comfortable" well, but they do.

The Marked Men family released two excellent garage punk albums in so many months. Mark Ryan's set a high bar for himself, and almost effortlessly sails over it.

Marine Dreams: Corner of the Eye

The Attack In Black alumni seem to collaborate on three to four quality records a year, so their break up's proven a rousing creative success. Ian Kehoe's second solo effort is a relaxed slow burner of low-fi pop songs that gets better with time.

In a sense, the Sadies are such masters of their craft that consistency can make them easy to overlook. Internal Sounds won't shock longtime fans, but it's still the best crunchy guitar-driven alt-country noise out there.

Jeff Burke's the creative lead in this project from the prolific Marked Men family, taking that band's distinctive sound through a power-pop filter that works exceedingly well.

Jangly, low-fi garage pop that, for all its quirky indie aesthetics, is an incredibly smart batch of songs. Loop on repeat on a lazy Sunday morning.

The Thermals may have retreated from the poppy introspective turn their recent records took, but they're firmly back in twitchy ass-kicking territory, so it's cool.

Everything they've put out since Process of Belief has been above grade. As expected, this is an incredibly solid set of songs, and although the formula's starting to show again the urgency that all good Bad Religion records requires is still there. So long as it is, I'm good for another round.

Daniel Romano: Come Cry With Me

I've a soft spot for the old Three Gut Records roster, and the Sword & Sworcery soundtrack had me primed, so it's great to hear a strong solo full-length from Jim Guthrie after all these years.

Having followed these goofs for the past few years, this LP didn't offer much I hadn't heard earlier. That said, I love these big dumb songs and it's great to have all this rollicking, drunken party punk collected together.

Vibrant, youthful, exciting pop punk that'll have you shouting along and running around in little circles wherever you are. Expect big things when SideOne delivers this to the US next year.

Crusades: Perhaps You Deliver This Judgement With Greater Fear Than I Receive It

Every time I re-listen to this record I bump it up a spot in the list, such is its evil glory. Murkier and less immediate than their debut, but at the same time far more interesting. Hallmarks of a grower.

Gruff yet weary, urgent yet aged songs for ex-punks in their 30s awkwardly trying to figure out how to rationalize adult realities and the fury of youth. Or maybe that's just me...

Fast, snotty punk rock with surf guitars and some garage tendencies. While this probably isn't very smart, original or artistically laudable it's absolutely what I want to hear ranging through my speakers.

Brainless God takes a core of late-90s styled pop punk and seamlessly bolts on at least a dozen deeply interesting ideas and stylistic left turns. This is an incredibly smart record and proof you can do something fresh in an otherwise tired genre.

More immediate and emotionally raw than Middle Cyclone and rather fascinatingly sequenced, this is one of my favourite Neko Case efforts. At the same time absolutely beautiful and a bit fucked up.

Jim Kilpatrick's charming, lo-fi (more or less) one man band has this uncanny ability to take seemingly simple little songs and implant them in your head forever. Earnest, self-depreciating, and almost unimportant by design, but I'm listening to it daily.

Growling, angst-driven, mean songs that attack the mundane, insignificant annoyances one faces as an entirely uninteresting domesticated adult. Rage against having to go to the doctor, cat fur allergies, and those fucking stick figure families people put on their car windows. God I hate them.

Cavalcade was a revelation, so good that it (to me) overshadowed everything the Flatliners had done prior. It may as well have been a new band. Dead Language had a tougher job. Instead of the opportunity to delight unexpectedly, it had to shoulder expectations. In the end these songs had to work harder, they had to be smarter. They do, and they are. This record's hooks aren't as immediate, but they lie waiting. These songs don't wear anthem status as comfortably as "Monumental" or "Count Your Bruises," however there's a depth and robustness to Dead Language that, on subsequent listens, proves itself the better record. If only all melodic punk rock can be as well written and performed as "Birds of England."