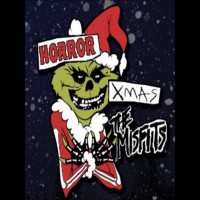 Certainly, there's nothing wrong with having a little fun around the holidays. As both Masked Intruder and a certain Canadian band have shown, Christmas singles really don't need to serve any greater purpose than a novelty that gets one or two spins a year.

Here, The Misfits go for that angle but really muck up the whole holiday spirit/fun thing with crass commercialism. You're a mean one, Mr. Grinch has two tracklist versions (and more color versions to boot). Both versions have the title track on the a-side. But, on the B-side, one version has "Island of Misfit Toys" and the other has "Blue Christmas." As with the preceding Decending Angel single, the band themselves sound great. Jerry Only's voice is the best it has ever been, Dez Cadena's guitar is resplendent as always, and Eric Arce punches out the tempo at a breakneck pace.

The resulting songs are high energy, rocking takes of these tunes. They're not life changing, but they're fun enough and for a novelty Christmas single- that's A-OK, and maybe even preferable. "Blue Christmas" is even a great choice because a 29 second bootleg of Danzig singing the tune with the Misfits has circulated for years.

But, while this could have been a fun little thing that the band did each Christmas, the release package reeks more of Strawbridge's than Saint Nick.

Really, only hardcore fans are buying these. Squeezing dedicated listeners for every penny- around the holiday season- is no way to thank long time supporters and is an even lousier way to preach goodwill to one's fellowman. It's a real botched operation- really, the Misfits could have recorded a mere one more song, made each 7" unique, and given fans something worth their money. Or they could have released one this year, and then released one next year, thereby giving fans something to look forward to. Instead, all they grant is buyers remorse and the bitter taste of trying to collect one's favorite band when the band merely sees fans as brain dead walking money bags (myself included.)

These are strong takes of these songs, but overall, the package is weak sauce.