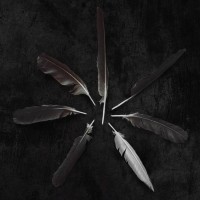 Caspian have a formula to them, not as rigid, but still a lot of their songs pan out the same. But being that technically sound, it really doesn't matter because there's a degree of dynamism and flexibility to each track, which leaves you in awe. Dust and Disquiet isn't their best but it definitely stands up as another firm statement of intent from a band that really elevates what you think post-rock really is.

"Rioseco" warrants a couple listens by itself because it really glosses over how clean and cinematic the band are. Not to mention the violins that add a welcomed orchestral layer to their sound - a theme I really wish was played with more on the record. That said, Caspian kick things off with slick guitars and end with hazy post-rock explosions as per the formula I mentioned above. "Arcs of Command," the most powerful track on offer, reiterates this. They balance these contrasts so well and this forms the basis of their overall sound - cerebral, to say the least. The tempo shifts are so badass.

They're as consistent as ever and feel like a concept even with the lack of lyrics. Vocals do kick in, and its such a rarity, on "Run Dry" which brings out a beauty and serene warmth that flows into "Sad Heart of Mine." It's like toe meets Mogwai. Contemporary but still paying tribute to the origins of the genre. Dust and Disquiet continues Caspian's signature sound as something meant for a sci-fi film like "Ex-Machina" or video games. There's something alluring to how they put their music together - intricate and moving. It's post-rock done really fucking well and as usual, they raise the bar.

Blistered: The Poison of Self Confinement