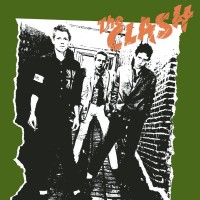 While the Clashâ€™s self-titled debut album was released in 1977 in the United Kingdom, it was released almost a full two years later in the United States to promote their first US tour, making it their second US release rather than their first in this country, as Give â€˜Em Enough Rope had some out in the US in 1978. [1] Even though The Clash had been the best selling import of the year when it was released, CBS was still worried that the album was not radio friendly enough for the United States.[2] What modern listeners might have trouble understanding, though, is that the Clash had a lot of non-album material to pull from. At the time, it was much more common than it is now to release stand-alone singles that never appeared on a full album. As full albums became more popular, this practice fell out of favor, although the rise of digital downloads is facilitating a slight revival of the stand-alone single. The Clash released a slew of stand-alone singles over the year, including some of their most popular songs such as â€œBankrobberâ€ and â€œThis is Radio Clash,â€ but their most prolific period of releasing stand-alone singles was between 1977 and 1979.[3] So when CBS chose to pull some of the songs that it didnâ€™t think would go over as well with American audiences, they filled in the gaps with four stand-alone singles, one B-side, and one song from a 1979 four-song EP called The Cost of Living. The result is that the US version of The Clash served as a sort of greatest hits compilation of the Clashâ€™s first three years as a band before they made the massive shift from a more traditional punk sound to the more eclectic sound of London Calling and beyond.

When I was a teenager (which was in the late-90â€™s and early 2000â€™s) the US version was still the version I ever saw in stores stores, where as today both versions are readily available, and most digital music sources seem to default to the original UK version, so itâ€™s easier to compare the two now than itâ€™s ever been. The tracks that were removed from the original version were â€œDeny,â€ â€œCheat,â€ â€œProtex Blue,â€ â€œ48 Hours,â€ and the original version of â€œWhite Riot.â€ Substituted in their place were â€œClash City Rockers,â€ â€œComplete Control,â€ â€œ(White Man) in Hammersmith Palais,â€ â€œI Fought the Law,â€ â€œJail Guitar Doors,â€ and a re-recorded version of â€œWhite Riot.â€ While Iâ€™m at a loss to see any significant difference between the two versions of â€œWhite Riot,â€ Iâ€™ve always believed that the songs they replaced were stronger than the ones that they left off, with the notable exception of â€œCheat,â€ a song so good and widely known that Rancid managed to cover it in the 1990â€™s when it wasnâ€™t easily available in the US. However, what has always baffled me, and continues to baffle me to this day, is why, when deciding which tracks to be left off of the US release, CBS did not decide to remove the song â€œIâ€™m So Bored with the USA,â€ which seems like the most obvious track for the chopping block, even if the only thing you know about the song is its title.

In the movie High Fidelity, thereâ€™s a scene where the main character puts â€œJanie Jonesâ€ on his list of â€œTop Five Side One, Track Onesâ€ of all time. However, while â€œJanie Jonesâ€ remains on the US version, CBS also decided to rearrange the track order of the album significantly for the US release, putting â€œJanie Jonesâ€ as the first track of side two. Instead, the US versionâ€™s first track is â€œClash City Rockers,â€ which I personally think is a much stronger album opener than â€œJanie Jones. â€œ With its infectiously chunky guitar riff (which they would later copy almost exactly for â€œGuns on the Roofâ€), â€œClash City Rockersâ€ makes for a much more dramatic opening to the album. Lyrically, the song lays out a manifesto for the punk movement that, while echoing the sentiments of other early punk artists, is specifically from The Clashâ€™s point of view. Most notably the song declares punk to be the new king of the music industry, while taking shots at the popular glam artists of the time that they sought to replace, like David Bowie and Gary Glitter, but aligning themselves more reggae artists like Prince Far I. Essentially, â€œClash City Rockersâ€ is a 1970â€™s punk rock dis track.

The Clash loved to do cover songs, but many of the songs that they covered, like â€œPolice on My Backâ€ and â€œPolice and Thieves, are now mistaken as Clash originals since the originals never really stood the test of time the way the Clash did. Of all their covers, â€œI Fought the Lawâ€ is probably the most high profile song the Clash ever covered, as it was originally written and recorded by The Crickets in 1960 for their first album after Buddy Hollyâ€™s death, then became more popular five years later when it was re-recorded by The Bobby Fuller Four. Despite this, â€œI Fought the Lawâ€ is still mistaken as a Clash original from time to time, and even if they didnâ€™t write it, they made it a punk standard, and influenced many punk artists over the years to cover the song both on their albums and as an impromptu live cover. Even the 2004 Green Day cover of the song (a digitally released stand-alone single) sounds like a carbon copy of The Clashâ€™s version. It was a pretty perfect song for The Clash as punk was considered to be an attempt to reset music back to the early rock and roll era, but with more of an outlaw attitude. The Clash were particular fans of Buddy Holly, and on one American tour they famously took a trip to Buddy Hollyâ€™s grave in Texas at midnight to light candles and sing songs[4]. Their version of the song took the jangly pop tune and cranked up the velocity with a furious drumbeat from Topper Headon, who joined the band between the recording of the UK version of The Clash and the recording of â€I Fought the Law.â€ Itâ€™s widely believed that Headon would have gone down in history as one of the greatest drummers of all time if it werenâ€™t for his heroin addiction, and the difference in talent level between Headon and the Clashâ€™s early drummer, Terry Chimes, who appears on most of the tracks of this album, is very noticeable.

I could literally write pages on â€œ(White Man) in Hammersmith Palais,â€ as it is literally my favorite song ever, but I will try to keep it brief. The song starts off as a critique of an all night reggae show at Hammersmith Palais that Joe Strummer attended with his friend Roadent.[5] He critiques the performance for not being â€œrootsâ€ enough, and smoothing out the rebellion of reggae into more of a pop-reggae sound. Most people say that the song then moves onto other topics, but Iâ€™ve always seen the lyrics as somewhat connected. His reference to â€œThereâ€™s many black ears here to listenâ€ always struck me as foreshadowing the lyrics about racial unity later in the song, and bemoaning the fact that there is such a thing as a separation between â€œwhiteâ€ and â€œblackâ€ music, with a call on punks specifically to be aware of that divide and to focus on fixing it rather than â€œfighting for a good place under the lighting.â€ In 1979, with the entire punk movement only three years old, Strummer calls out those in the movement who have already sold out to corporate interests, and if you replace his lyric about â€œBurton suitsâ€ with â€œHot Topic shirts,â€ his claim that corporations were â€œturning rebellion into moneyâ€ still rings eerily true today.

By all accounts, both the UK and US versions of The Clash are near perfect albums, and both are absolute punk classics. But, even though it was rearranged and chopped up by a record label, I think the US version came out a little stronger, a little harder, and a little smarter than the UK version. The Clash was a great band from day one, but they improved with age, and the US version shows a little bit more of the maturity that they developed in the two years after their debut albumâ€™s release.

The Clash: The Cost of Living E.P.