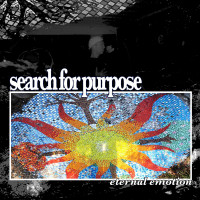 Search for Purpose mine the tried-and-true melodic youth crew sound on their 8-song mini-album of sorts, Eternal Emotion. While this seems to be the new standard for present hardcore acts (dictated by SfP’s probable future label Triple B Records’ releases this year: Candy’s Good to Feel [9 tracks]; True Love’s The Pact [8]; Ecostrike’s Voice of Strength [7]), the band has previously labeled this as a 12” EP to be sure, following up a demo and a couple of two-song releases.

At the very least, this leaves little room for filler, and while Search for Purpose don’t quite knock it out of the park on Eternal Emotion, it’s definitely a promising document void of fluff. Their sound essentially falls somewhere between the aforementioned melodic youth crew sound of 1990 or so, and the update that sound received in the mid-2000s with the “awesomecore” movement in the northeast U.S., with youthfully gritty, intelligible shout-sung vocals and a lot of powerful mid-tempo moments like on opener “Fading Warmth” and “Journey”.

Turning Point is a hot influence these days, and that’s probably the primary reference point here, somewhere between It’s Always Darkest…..Before the Dawn and the highly lauded No Escape split (they even have a familiar acoustic intro on the title track, and closing “Outro”). The lyrics forego straight-edge proclamations in favor of ruminations on personal growth/discontent and fractured relationships, and while they aren’t reinventing the wheel, they certainly get the job done. I hear a touch of Chain of Strength in here as well though, and the clarity of the recording wouldn’t make Eternal Emotion sound out of place on the same shelf as a, say, The Things We Carry. Seriously though, I can’t stress enough that in a world where bands seem to deliberately want to sound like garbage on record, the production is very clean and strong and suits them well.

The record is mostly pretty straightforward and captures that slightly melancholy, minor-key urgency that makes this sound such a timeless and alluring draw (dig that closing pickup in “Sanctuary”). We’ve heard this album before in various strains, but it’s hard to deny when done at least competently. But the band do show a willingness to step outside its comfort zone occasionally, with mixed results in the process. Abrupt tempo changes are a-plenty, for one thing. Their singer attempts emocore-y singing parts on “Journey” and the title track, and it sounds slightly off-putting. But hey, it’s more imaginative than a divebomb, and the second half of the song is very strong. On the dual closer “Collapse/Outro”, there’s a bit of a wild, unexpected guitar solo with a funky effect on it, and it’s not even all that out of place.

Released this past summer on Plead Your Case Records (a previous home to Magnitude, whom they share members with as well as the burgeoning Ecostrike), the fittingly titled Eternal Emotion has been strangely overlooked and is certainly worthy of checking out for those who can’t get enough of this particular strain of hardcore.