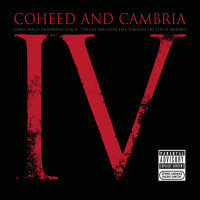 My first experience with Coheed And Cambria was at a bar in Savannah, Georgia, some four years ago (and change). They were opening for Recover to an audience of about twenty. It didn't stop them from bringing everyone to attention, rocking the venue for thirty solid minutes (which, back then, was about six songs). I bought a copy of The Second Stage Turbine Blade and have enjoyed it to this day.

But something seemed to happen. With the band's popularity grew the minutes on the tail end of every song. The second album of this conceptual prog-rock group was 'epic' in all the wrong senses; with a few strong tracks and mostly disposable material, the Coheed And Cambria I originally saw became more focused on reviving dead metal trends (that died for a reason) of played out solos and dirty, long hair instead of bringing the energy of their stronger tracks like "Delirium Trigger" and "Neverender" to full fruition.

So now, four years, a major label and a respectable amount of touring later, comes this album with a title I can't even fully type. It's technically the fourth "chapter" in the story of Coheed and Cambria, who are actually characters in a sci-fi world that the songs illustrate. Granted, I never cared much to follow the story, because for a majority of the last album I was too bored to keep listening.

With this album, things only get worse. The two best tracks are put right at the front of the disc, with a cheesy acoustic ballad stuck in between. Yes, the introduction track, a piano/symphony instrumental comprised of a simple layering of the previous two albums' introductions, is one of the best songs on the CD. "Welcome Home," the third song on the album, is the track that this CD was promoted with most heavily; partially because it's the one where Coheed brings back the aggressive rock and roll it decorated the first disc with, and partially because every other track on this CD has more downsides than upsides.

Yes, I'm not going to bore you with a track-by-track review, because a majority of it would be, "This song keeps going, and going, and going, and going..." I don't know how some sites are giving this album a rating upwards of 8/10, much less 5. This band abandoned the aggressive rock side of them that made them so popular to begin with, and now relies on the more reggae-pop-prog-crap that made the last album practically unlistenable.

I'm not taking a punker-than-thou stance on this one, and I'm surely not saying this band has no talent; it takes talent to play a solo for 8 minutes and not bore yourself to sleep. This is just bad, skippable music that, for a majority of the incredibly long waste of time this album is, makes you wish this actually was The Final Chapter.

Bosio: This is Why We Can't Have Nice Things