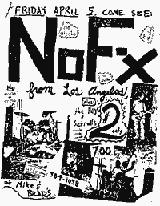 It's Sunday August 6th, 2006. So much seems to have happened this week that I don't need to open with any witty opening. That's too bad for you guys, because the insightful hilarity I could have unleashed… Hot damn. You have no idea. I have profound influence on American comedy after all.

The people must have something good to read on a Sunday

Soap opera time. Of course you all heard that last week prominent Christian metalcore act Underoath dropped off a fairly plum spot on the ongoing Warped Tour. It's been no secret that the band has been the brunt of many a joke from NOFX, so the rumour mill kicked into overdrive with claims that Mike drove the band from the summer trek. Of course we hate rumours here at the `Org, so we went to the source and had Fat Mike put those to bed. You could find video clips featuring both those bands, along with other Warped acts like the legendary Buzzcocks online this week as well. On the political front we learned that the non-profit suicide hotline 1-800-SUICIDE was in danger of losing its funding from the U.S. government. Both Mike Park's Plea For Peace and Louis Posen's Take Action have risen money for the cause. Rounding out the batch of weekly controversies, ads for the new record from metal overlords Slayer have been banned in Fullerton.

We won't say anything about the lucky chump who received a $25,000 fellowship to research punk rock in Europe, other than that our university achievements now seem far less cool. We said goodbye this week to both veteran political hardcore act Boy Sets Fire and Canadian buzz duo Death From Above 1979. On the popular music front My Chemical Romance is planning an October release and video award nominations were earned by bands like AFI, Green Day, and Panic! At the Disco. Finally on the touring front we've seen Comeback Kid and Clit 45 added to the Bad Religion / Dropkick Murphys tour and details announced for the tour featuring Less Than Jake, Loved Ones, Catch 22, New Mexican Disaster Squad and Set Your Goals.

This week we continued our series of chats with the legends of the punk scene, speaking with Exene Cervenka and John Doe of X (interview). We also published a chat with Jason Navarro of the sadly defunct Suicide Machines (interview)

Click Read More to see this week's streaming music, contests and other highlights.

Check the Punknews Music page for to check out new music from Toronto's Kover, Spring, TX's O Pioneers!!! and Huntington, NY's Take My Chances among others.

Suntans are for Winners Win the Lujo Records Discography
Hailing from the nation's capital by way of Louisiana, and now in their fifth official year of genuinely independent existence, Lujo Records has amassed a celebrated and diverse catalogue of releases spanning from bone crushing hardcore to lush, atmospheric pop. Fortunately for you, label owners Erik Aucoin and Jocelyn Towers have decided to give away a copy of everything the label has ever pressed to one lucky winner.
Helmet (Signed Guitar) Helmet recently released their first record for Warcon Enterprises. The record is their first since 2004's Size Matters and the latest in a series of highly influential records. For the record, the band aimed for a return to their classic sound, and worked with Strap It On and Meantime collaborator Wharton Tiers. To celebrate this latest record, the band has decided to give away signed a custom Page Hamilton Signature series ESP guitar.
The Bronx (Ouija Board)
Despite our obvious love of instruments and high tech gizmos, one thing we always love giving away is weird, unique swag. In this case, our friends in The Bronx want to celebrate the release of their Island Records debut, The Bronx by giving two lucky winners the most accursed of prizes. That's right, we're giving away two Ouija Boards! And not just any Ouija Board, but unique Bronx-themed boards that coincide with the artwork of their album.
Dead To Me Contest Dead To Me recently released their new album Cuban Ballerina on Fat Wreck Chords. To celebrate the band and label are giving away a few prize packs to some lucky Punknews readers. The grand prize winner will even get their hands on some super secret vegan recipe's straight from the kitchen of Dead To Me's Chicken.

We've theorized that you visit other websites out there, and we know it can be tough to leave the calming blue glow of the `Org, so we'll help by infecting the rest of the web with Punknews content. Waste some time on the Punknews.org and Punknews Records MySpace pages or contribute your listening habits to the weekly charts Last.fm group.

Why register on Punknews.org? Registered users can rate bands and reviews, building recommendations and links between artists for the whole community to share and discover. Users get their own profile page showing recent comments, top rated bands and favourite records and more. So go ahead, cast off the cloak of anonymity and create your account today - it's free, easy and private.