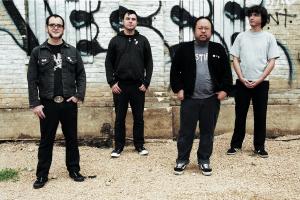 Contributed by strangenotes, Posted by Justin August No Idea In Memoriam 14 years ago

Founding member of J Church and all around well–loved punk icon Lance Hahn has passed away. Hahn had been comatose since Friday, October 12th following a collapse during dialysis. According to a post attributed to Hahn's girlfriend:

as far as the doctors can tell, this collapse was due to a sudden, drastic drop in blood pressure, which in turn was probably caused by a recurrence of the infection he had had in september combined with the stress of dialysis. he received immediate cpr from medical professionals at the dialysis center, but as it took fifteen or twenty minutes to resuscitate him, he suffered neurological damage from lack of oxygen to the brain, leaving him in a coma from which he never returned.

Lance Hahn was the lead singer, guitarist, and founding member of J Church. He also wrote extensive "punk rock history" articles for Maximumrocknroll. In addition of all of this, he found time to run Honey Bear Records. Hahn was working on a compliation book of writings on anarcho–punk bands, called "Let the Tribe Increase," to be released on AK Press.

All of us at Punknews.org extend our deepest condolences to Hahn's friends and family.