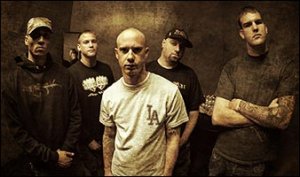 Terror has signed to Century Media. The announcement comes on the heels of the completion of their new album and follow up to 2006's Always the Hard Way and their 2007 EP Rhythm Amongst the Chaos.

The band will make their debut for the label with The Damned, The Shamed on June 10, 2008. The band recently wrapped up a tour with Earth Crisis. They will soon head to Europe with Ignite and Strung Out.

Dashboard Confessional working on next album