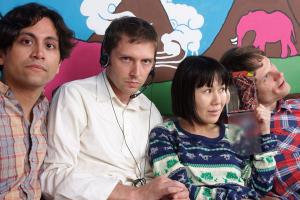 Oakland, CA's Deerhoof have posted the video for their song "Buck and Judy" on Blurt-Online.com along with a link to a live performance as well. The song comes from their album Offend Maggie which was released in 2008 through Kill Rock Stars.

The video was directed by C. Spencer Yeh of Burning Star Core, and the live footage was shot by Brendan Canty Fugazi and Christoph Green. You can find the video here.