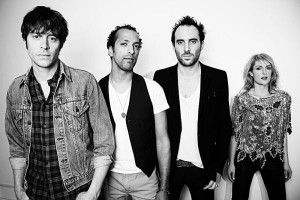 Contributed by inagreendase, Posted by Adam White Videos 12 years ago

Toronto's Metric have posted their new video for "Sick Muse." The video was shot by Justin Broadbent and Michael Leach of HotDogGarbage. The song appears on their new self-released record Fantasies.

The band will appear at this summer's Glasonbury festival in the UK. They'll play the Saturday, June 27th date alongside Bruce Springsteen & The E Street Band, Franz Ferdinand, the Gaslight Anthem and many others. The band will also play the July 4th Virgin Festival in Halifax, Nova Scotia with Arkells, the The Offspring, the Tragically Hip, Dinosaur Jr, Plants and Animals, Hey Rosetta! and the Handsome Furs.