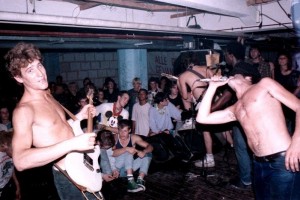 Contributed by PAc, Posted by Bryne Yancey Dischord 13 years ago

Legendary hardcore outfit Scream will be reuniting next Sunday, December 20, for a show at The Black Cat in their hometown of Washington, DC. The show will feature the band's original lineup of Pete and Franz Stahl, Kent Stax and Skeeter Thompson. Tickets can be purchased online here.

The band's debut album, 1983's Still Screaming, was reissued on vinyl earlier this year. There are also unconfirmed reports that Dave Grohl, who drummed with Scream in their post-Dischord Records days and went on to bands such as Nirvana and Foo Fighters, is interested in remixing the band's out-of-print 1988 record No More Censorship for a potential reissue sometime in the future.

Tours: The Loved Ones (January)