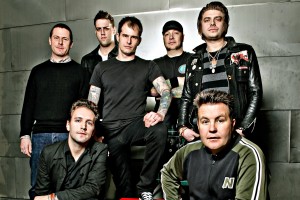 The Dropkick Murphys have unveiled some footage from their upcoming CD/DVD Live on Landsdowne. Click below to check out a recording of their hit "I'm Shipping Up To Boston" in which the band was joined on stage by the Mighty Mighty Bosstones. A trailer for the DVD is also posted below. Live on Landsdowne is slated for a March 16th release through the band's Born & Bred Records imprint.

The Murphys recently announced opening acts for the band's residency at Boston's House of Blues. From March 12th through the 17th they'll be joined by Sick Of It All, Have Nots, Swingin' Utters, Filthy Thieving Bastards and others. We posted those details earlier.