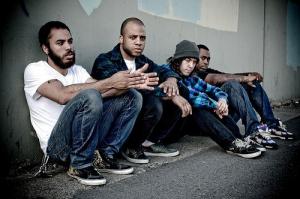 Sacramento, CA hardcore outfit Trash Talk have detailed their sophomore full-length. The record is titled Eyes and Nines and is due out physically on June 8, 2010 and digitially on May 18, 2010 via the band's Trash Talk Collective imprint. Once out, it'll follow up the band's 2008 self-titled debut.

Eyes and Nines was produced by Joby Ford (The Bronx) and will feature guest appearances from Greg Hetson (Bad Religion, Circle Jerks) and Matt Caughthran (The Bronx, Mariachi el Bronx).

They'll be supporting the new album on an upcoming tour with Alexisonfire, Therefore I Am and La Dispute.

Against Me! announce 'I Was A Teenage Anarchist' digital EP

Music: As I Lay Dying: "Beyond Our Suffering"